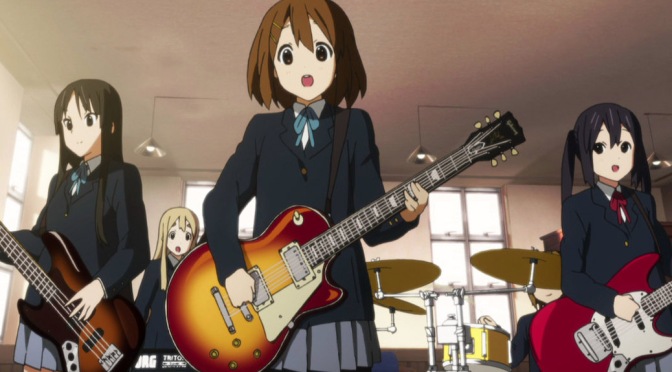 It is no secret that I’m not a fan of moe anime. Apart from usually looking hideous, they bank everything – character, plot, personality, effort – on the moe. The characters are insufferable, one-note, and what passes for humour is non-stop screeching. Oh god, the voices. They’re torture. So, what does a seemingly stereotypical moe anime with good characters, restraint on the screeching, and real humour look like? Meet K-On.

This anime revolves around the daily school life antics of a girls’ music club. They claim it’s a music club, but they spend more time drinking tea, eating cakes, and doing odd activities to promote the club. K-On is more a slice of life than a music anime. We have Yui the protagonist on the guitar, Mio on bass, Mugi on keyboard, and Ritsu banging the drums. A fifth joins the club later. Each girl fits one of the main archetypes of the typical “cute girls doing cute things” cast. Yui, for instance, is a clumsy airhead, which sounds clichéd. Another girl is the shy, self-conscious type yet popular with the boys. Also sounds clichéd. Their teacher is more of a child than half of her students. Sound familiar?

In fact, if I were to detail K-On in full on paper from its characters to the episodic scenarios, it would be normal for you to dismiss it as more of the same clichéd moe fare. To own a truth, though this had been on my list to watch since before my first review, I always suspected it as more of same that a hardcore fanbase overhyped to outsiders. Probably why I took so long to get to it. I was right, in a sense. K-On is more of the same, technically. However, it takes that sameness and executes it so much better than the competition that it makes me think even less of those other anime. Yes, K-On had many imitators in the years that followed, but it wasn’t an original idea either. I look at this anime and can’t pick out anything I would call different or innovative for the genre, apart from caring about more than the moe. Here we have a great example of the importance of execution over idea. I talk of this plenty in isekai reviews, where all they have going for them is that one change from other isekai, as if that alone will make for a great story. You could change nothing at the core but execute in a great way and now sentiment won’t be, “Oh, it’s just a rip-off of [other anime here].” Instead, viewers will say, “It’s like [other anime] but actually good.”

These characters are fun and the scenarios are fun, especially in season two when the series hits its stride. The humour works and has more than “it’s funny because she’s cute” as the joke. K-On is, in simple terms, fun. Who knew that having good characters with depth would make for an enjoyable experience, aye?

Huge praise must go to Kyoto Animation for applying their considerable artistic talents to the series. Nothing about K-On visually feels template. When the girls have those expected moe and anime reactions, we aren’t getting stock animation you see copied and pasted across the seasonal clones. These characters have such life and energy, such expression thanks to caring artists. Very giffable too, as I’m sure you’ve seen around the net.

One problem tangential to K-On is the ease in which it is to imitate. Imitating well is a different matter, but to create a clone (similar to how easy it is to clone Sword Art Online) takes little effort and had caused a flood on the market. If you have seen its imitators already, I can imagine them lessening your experience with K-On, for while this is better, you could feel as if you know everything about K-On before you even start. That said, should you have an inclination for the genre as an outsider, I do recommend this one. Actually, this is the only anime of the typical moe variety that I would recommend to non-core fans.

I want to be clear. You aren’t finding anything revolutionary here or the anime to change your mind on moe, but it is still a good anime regardless.

One final note – should a dub be your preference, avoid the original Animax dub. Absolutely lifeless. The Bang Zoom redub is close to the Japanese in tone and energy and a fine experience.

Recommendation: A must for “cute girls doing cute things” fans. This might appeal to those not already predisposed to the moe genre. K-On is good though still very moe.