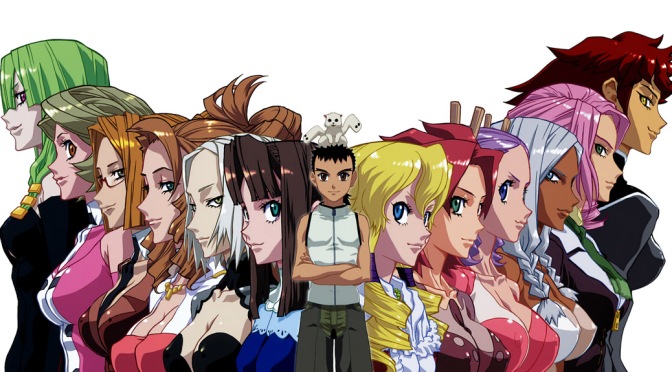 The original, janky, and rather rubbish Tenchi Muyo was an anime I occasionally caught on TV an eon ago. I never made an effort to watch much of it, since it was a harem with awful art. A decade later, I stumbled upon a page regarding Tenchi Muyo! War on Geminar, which had far superior art and positive buzz from fans. How could Tenchi Muyo have produced anything that wasn’t garbage? And so, with many more years passed since then, it’s finally time to end my curiosity and see the fuss.

This story has Kenshi, younger brother of original Tenchi Muyo’s protagonist, teleported to the fantasy world of Geminar with a mission to assassinate Princess Lashara, but he fails and becomes her slave before eventually fighting for her against his summoners.

War on Geminar makes a good first impression with its visual production. While not unusual by today’s standards, it was rare for what is evidently an otaku-only anime to have an animation budget – sliding stills and big boobs were the expectation. The world design also has creativity. The reptilian mech designs look good, animated fluidly in duels, and I love the idea of an airship being a landmass with a palace and forest on top. Sure, the first episode has harem markers and some fan service barf, but my impression is positive. This is nothing like the Tenchi Muyo I remember. What is this grand magi-tech fantasy kingdom?

However, once the story settles in and starts churning through daily life in Geminar, everything turns to crap. We meet all the girls of his harem, covering every harem archetype to draw in the maximum otaku audience (see cover image of this review up top for the full selection). Whatever one’s preference, War on Geminar has the girl for you. Of course, none of them has an iota of depth, their sole purpose in the anime being to fulfil the obligations of their archetype. It’s stupid interaction after moronic interaction with Kenshi. They almost have depth, right up until the harem tropes undermine their arc to keep them in the pit of trash.

Where it becomes truly atrocious though, is with Kenshi. Allow me to introduce you to the most Mary Sue character in anime. You think you know, but you don’t.

Lashara puts Kenshi to work in the high-class girls’ school as handyman, a Jack-of-All-Trades; except, the writer forgot the “master of none” part of the Jack-of-All-Trades. Kenshi is perfect at everything on his first day. Housekeeping, brick laying, shoemaking, construction work, five-star cooking, delivery, climbing, running, sword fighting – you name it, Kenshi is the best at it first try. Every girl in school is after him, but because he’s so fast and never tires, they all drop of exhaustion. His massage skills are so great that a single grope from him will leave any girl in a permanent state of crippling arousal, for some reason. Then every girl wants him to wash her back during bath time.

Wait, wasn’t this some fantasy anime with mechs? Yep, that’s what it claims.

War on Geminar has an identity problem. It can’t decide if it wants to be a fantasy war series or a high school harem. Once you strip away all art (which has weakened after a few episodes) and all the flash, this is just another bad harem. The highest budget harem you should perhaps watch for its terribleness, certainly, but still a bad harem like any other at its core.

War on Geminar appears to have great art at first glance. From characters to world design, this looks far better than the original Tenchi Muyo. I like the mech designs and flying palace. There is good animation during duels, but has so much awful outside that – static shots, repeating animations that linger, and some horrible shots. One instance has smoke billowing out of a building, and when the building tips over, so does the smoke pillar. Yes, the smoke in the air “tips” over.

The writing turns you into an idiot. The princess who speaks in third person is especially dumb. Full of kewl quips and one-liners. Even the sound design is poor, which is rare – I mean rare. For example, the guy running on grass makes the sound of heels on tiles. Why?

A boy mysteriously teleported to another world joins a cast of girls to defend the empire. This is the highest budget harem garbage ever made, Mary Sue protagonist included.

Recommendation: Avoid it or a must watch for garbage. Tenchi Muyo! War on Geminar’s production values make it easier to watch that other “so bad it’s good” titles, so if you want some absolute trash, then have fun with this one.