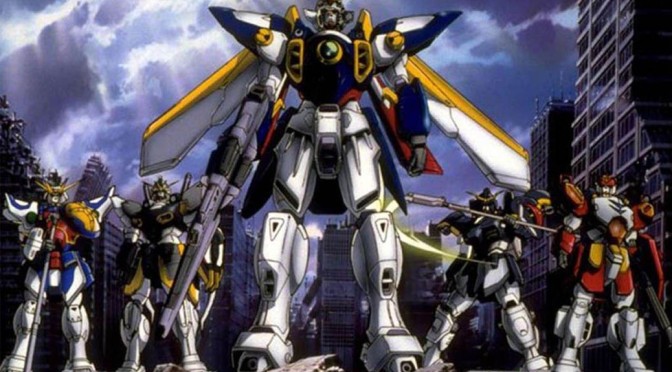 I wasn’t prepared for it to be so terrible. Gundam Wing, what a wreck.

Gundam Wing’s first episode overflows with the arse gravy that will set the tone for the rest of the series. We witness the space colonies fight back against the tyrannical Earth Alliance by sending five Gundams down to Earth disguised as meteors. At first, the plot only follows one pilot, Heero, the brooding one from the Backstreet Boys for girls to squee over despite having no personality, as proven moments later when he threatens to kill Relena and she instantly falls in love with him. Of. Course.

Heero’s cover is as a student in the richest school, where Relena is the richest of them all. She is a Mary Sue in every sense of the term. She is so loved by all for no reason other than being rich (a level of wealth that isn’t achievable as the daughter of a minister, for that matter) to the point where she receives a standing ovation for giving Heero a birthday invitation. You think I jest; you think I miswrote; surely, it must be something greater than an invitation? If only it were. If only it were…

Later on, she ascends to leader of a pacifist faction. Her strategy to world peace? “Hey, everyone, why don’t we all throw away our weapons.” (And all writers around the world collectively facepalmed at such stupidity.) Don’t mistake this for some naïve ideal that a five-year-old would make when she hears her father, the president, is struggling with an armed conflict – “Daddy, if no one had guns, then no one could kill.” “Aw, that’s cute sweetie.” Of course, the president doesn’t take this endearing remark seriously. But in Gundam Wing, Relena’s imbecility is not only taken seriously, but is also the prevailing theory for the good guys. It isn’t her age (fifteen) that bothers me, but the incompetence of character and writing. I would wish for the antagonist to win, but his theory is to achieve peace by destroying everything – again, not ironic. Unlike Gundam 00 where many criticise war as a deterrent for war, here, he has huge support. There is only so much stupid you can cram into one story, yet Gundam Wing manages to push that limit.

The rest of the Backstreet Boys (watch them pose for a photo shoot in the OP and I defy you not to think ‘boy band’) are Duo (two), Trowa (three – wait a minute…), Quatre (four – oh!), and Wufei (five – my mind is blown! [Sarcasm] Did they have to be so on the nose?). Like a boy band, they each do one thing, never-evolving, never showing variance by show’s end. Even their introductions are like a boy band. They turn to the camera and say, “My name is X, for the record.” How did no one point out the forced nature? How did anyone even consider this good writing to begin with, worth the time to write down?

Bloody hell, I almost forgot the obsession with being An Hero. Seemingly every episode, some guy has the idea to self-detonate his Gundam. One does detonate while standing in the cockpit (it’s to look cool, okay? Pfft, obvs!) and he survives with barely a scratch. Pity. It’s as if these characters are desperate to exit stage left as soon as possible. Then again, which such awful dialogue, which actor wouldn’t want to exit? A gem comes from Wufei when he says (paraphrase), “If you are right [in this argument], then you will beat me in a fight.” Yes, Wufei, because the more intelligent people always hit the hardest. Again, I must stress that all this is delivered and accepted without a hint of irony. The writers truly thought the audience would find this cool.

Then there is this irritating Gundam trope where every character and their mums have to have a say in the scene. Two pilots fighting, let’s cut away to some irrelevant git giving his opinion. Imagine trying to get through a dialogue with someone, only to have a dozen other people inject “cool” one-liners about how awesome the person you are talking to is. Shut. Up. I feel this stems from an inability for two characters to carry the dialogue due to writer incompetence.

There is so much more wrong with Gundam Wing, but it would take pages to cover, so I will touch on a final flaw: the plan. These pilots come down to Earth and they don’t know each other’s identities. Really. The writers probably thought it would be “cool” to have the Backstreet Boys fight each other before they realise they’re on the same team. Yes, because basic sense and logic mean nothing beside fan service rubbish. If these guys were the only hope for my country, I’d say we are screwed.

Gundam Wing’s core idea – rebels versus tyrants with lots of politics – isn’t a bad one, but the execution certainly is. I can’t believe how much I wanted to see Gundam Wing after those ads on Toonami back in the day. With Gundam Wing’s fame, it is no surprise that many avoid the Gundam franchise after watching this.

Gundam Wing has a decent aesthetic but the production quality is sub-par, particularly when you compare to the likes of Bebop and Trigun that extracted more with the same resources. There are a lot of still pans across groups in conversation with no animation.

The OP song is a nostalgia trip and I still enjoy it today (helps if you don’t know what the Engrish is trying to say). The voice work is good, but the script is utter arse.

An action and political space opera that doesn’t know the first thing of politics and tries too hard to make characters cool during action. Could have done with one decent character.

Recommendation: Avoid this. If you watch Gundam Wing, it will likely put you off the franchise as a whole. Watch Gundam SEED instead, or Gundam 00 if you want a similar plot.