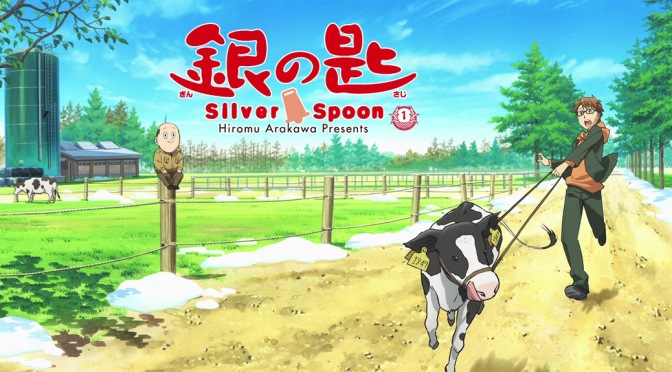 Silver Spoon comes from Hiromu Arakawa, the mind behind Fullmetal Alchemist. While this shares a theme or two with her more famous work, you are in for a much easier time here.

Hachiken flees to a rural school to escape the stress of the city, thinking rural life will be easy. Babysit a few animals, water a few plants – how hard can it be? This hard working student expects to breeze through classes against these country bumpkins. He’s in for a shock when he learns how they really make the sausage and the backbreaking labour that goes into agriculture. He can barely compete with the country kids who grew up around this. Trying not to vomit during the lecture on the biology of egg laying is the least of his trials ahead.

Silver Spoon’s primary focus is to teach about farm life, agriculture, and animal husbandry. The author grew up on a farm and her passion for country life is clear. And in this respect, Silver Spoon is a success. If you are green to the field, you will learn plenty about where your food comes from, including some of the more disgusting details (though it doesn’t go full slaughterhouse).

Hachiken has to learn to skin a deer before they eat it. The school also makes him raise a piglet to maturity for later consumption. Calls him Pork Bowl. I enjoy the educational side of the anime. It’s engaging, doesn’t preach, and is honest. This isn’t an anime for those who can’t handle animal slaughter, even in an animated form.

The less engaging side is the story and the characters. The characters’ country antics are decently fun, but there is nothing special here. The humour also relies too much on Hachiken’s fish out of water experience. Everything is exaggerated with how incompetant he is at this. After a few instances, you just want to say, “Okay, we get it. Move on.” Perhaps this is where the author’s lack of city life experience bleeds through? Who knows.

The character relationships lack drama. By that, I don’t mean we need a Shou Tucker storyline in Silver Spoon. We do need, however, conflicts between the kids (and their teachers) that challenge who they are and ultimately grow them into stronger people. Almost all challenge and conflict in this story comes from the school and farm work. Audiences tend to remember characters for those great character moments, where we see them struggle, see them fail, and see them shine. Without these moments, nothing makes this particular character stick to the story. Let’s use a simple example. Think of a generic action film, a “bang bang, shooty shoot” type. Could you replace the protagonist with another protagonist, changing little in the process? If so, then the character doesn’t matter, no matter how good the action is.

Hachiken and company aren’t quite that replaceable, of course. However, they aren’t memorable. They serve their function to carry you through the episodes and education segments. You’ll find them pleasant people for a few hours, part on good terms, and not think of them again.

Barakamon is an example of doing the simple slice of life story with memorable characters. Even though that anime has less physical challenges, the conflict is greater because of the personality clashes. Those characters are so full of life that they stick with you.

Silver Spoon plays it too safe. You should predict the story and characters arcs from the outset, something one cannot say about Fullmetal Alchemist. The association with the author’s pedigree will likely set expectations too high here. This is a good anime to watch if you need a break from the heavy stuff.

The art is average in a positive way. It has a clean consistency and enough animation to avoid becoming a slideshow.

The acting is quite good, though I can’t say the same for the music.

A city boy must hold his lunch as he learns of agriculture and animal husbandry in the country. A typical and predictable story carries the interesting and detailed knowledge of these professions and country life.

Recommendation: Try it. Silver Spoon is quite fun despite the simplistic story, though it may not be enough to keep your attention to the end. You will learn more than you may every want to know about farming and animals though.