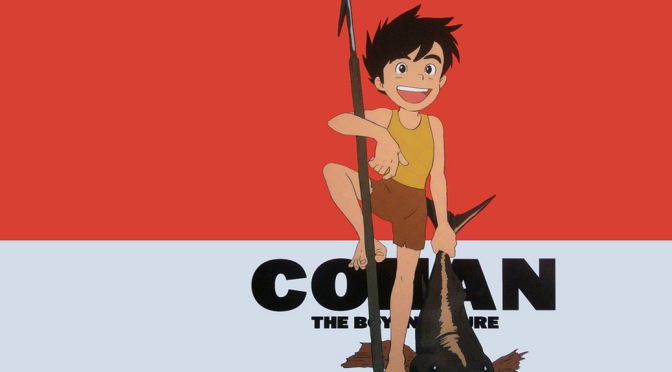 Similar: Castle in the Sky

Now and Then, Here and There

So as it turns out, Future Boy Conan isn’t related to Detective Conan. When the dear reader that requested this informed me this was Hayao Miyazaki’s directorial debut, my first thought was, “Huh, I didn’t know he worked on Detective Conan. Then again, it’s such a long series – nearing 1000 episodes and over two-dozen movies – that everyone probably worked on it at some point.” The mistake isn’t isolated to me apparently, as some wikis will mention, “Not to be confused with Detective Conan.” So…my bad?

Future Boy Conan is near as un-detective-like a story as you can imagine. It takes place in the post-apocalypse of WW3 after a mega-weapon wiped half the planet, sunk several continents, and shifted Earth’s axis. Attempts at fleeing into space failed. One such rocket crash-landed on an island, which the survivors called home as they waited for inevitable extinction. However, a baby boy was born that would soon discover they weren’t as alone as originally thought.

A chance encounter with the girl Lana fleeing from Industria, the last evil corporation, leads the boy Conan off his island and onto a grand adventure, sailing from island to island with a colourful cast of characters to meet along the way.

This is anime firmly made for kids as dictated by Miyazaki when he changed the tone of the source material. In the original novel, The Incredible Tide by Alexander Key, the world is one of pessimism with little hope for the characters. Miyazaki didn’t want to inflict this on children, so flipped it to optimism, dropped Conan’s age by a demographic and gave him ten times the energy and enthusiasm. With Miyazaki’s goal in mind, it was the correct choice. I can’t imagine many kids would have enjoyed the original grimness aimed at teenagers.

However, I do feel he went a little too far. Conan is so energetic that he borderlines on annoying – made worse by the acting performance – and goes far beyond the boundaries of suspension of disbelief. Conan is freakishly strong. He has the strength of 20 men, able to throw boulders, haul great white sharks, leap 50 metres to an aircraft taking off, and hold onto the wings at speed. All fiction requires some measure of lenience if you wish to enjoy anything ever created, but this too much without some plausible explanation. Lana’s psychic ability to communicate with seagulls and see through their eyes is more believable.

I don’t imagine kids would have a problem with this. Looking back on some of the shows I loved as a kid but wouldn’t watch anymore, it’s shocking how much I bought into the action they sold us.

I would be able to look past this, with effort, if the story and other characters appealed to me. But much like the two leads, everything here is tailored for kids. The environmental message is black and white, Industria is a Big Bad with little nuance, and the story prioritises adventure over characters and plotting. It’s for kids, so of course! It’s natural.

I’m not suggesting that any who enjoy this anime are children. Rather, I’m saying it’s unlikely to have adult appeal unless you watched it as a child, already bonded to the series, or you are in it for the intellectual curiosity of seeing Miyazaki’s directorial debut.

That latter angle does have appeal to me. You can see the roots of his future films growing here, not least of which is the environmentalism, a theme he has since overused through several stories that feel like iterations of each other. The captain of an enemy ship, and my favourite character, feels the most Ghibli-like of the cast. Your ability to love him despite being a villain is a studio trademark. And of course, you will find many “kid moments” that make the younger cast feel more like real kids. It’s not as perfected as later seen in the likes of My Neighbour Totoro and Spirited Away, but that charm is there.

The least Miyazaki element comes in the form of the caveman child Jimsy, who has a tobacco addiction and gets drunk. After Miyazaki’s objection to pessimism for children, he is a surprising addition. Not a bad character, though unexpected from a director so squeaky clean.

Future Boy Conan was alright for me in the end. I am glad to have marked it off my list, but I have no inclination to watch the sequel.

For its year of 1978, Future Boy Conan’s art was an achievement. It isn’t anything special compared to today or to anime movies, but to have plenty of animation, detailed environments, and consistency throughout is impressive for an old series. The only major flaw is the lack of lighting and shadows on characters (it multiplies cel painting times to accomplish), which makes them standout more from the background than they should.

The acting is a mixed bag. Some are great, like the captain and Lana, while others aren’t easy on the ears. Conan himself has the worst performance – more screeching than acting.

A boy’s encounter with a girl propels him into a conflict against the last corporation of evil in this post-apocalyptic world. An adventure story through and through, Future Boy Conan’s appeal towards children likely won’t attract older viewers beyond the director’s pedigree.

Recommendation: For Miyazaki fans only. I can only recommend this to those looking to see Miyazaki is his first directorial role (and to kids, but I don’t think they read these reviews). If you want a shorter version, see Castle in the Sky.