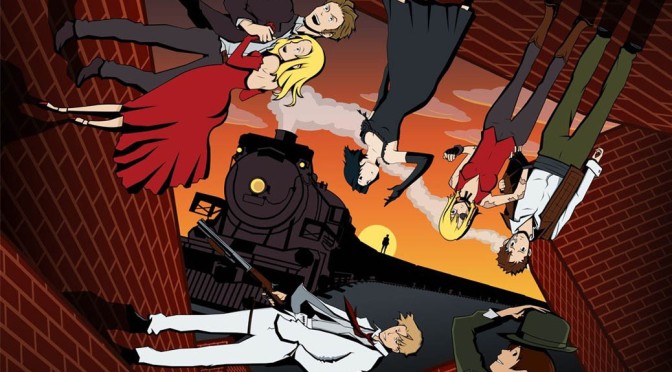 Baccano opens with a historian and his apprentice discussing an event centred on the Flying Pussyfoot, a US continental express train that left a bloody trail in its wake. They can’t decide on where to start or even who should be the main character in their chronicle, and for good reason, as Baccano’s nonlinear narrative jumps all over the place between perspectives and times. Add in a large cast and you can understand the difficulty in deciding how to approach the story.

Baccano takes place primarily in three locations: 1930s Chicago with tensions rising between mafia groups, New York where an alchemist looks to create the elixir of immortality, and in between the two is the Flying Pussyfoot, acting as a nexus for the many plot threads including the legend of the ‘Rail-Tracer,’ a monster said to target train passengers. Baccano’s twist on the mafia genre is the inclusion of immortals, humans who can regenerate from any damage, every drop of spilt blood vacuuming back into their body after death – to disgustingly great visual effect, I might add. This is a tale of alchemy, psychopaths, gangs, thievery and loyalty.

My favourite characters were Isaac and Miria, a thieving duo with the craziest ideas for heists. “We will steal from Earth itself by digging and taking the gold we find without asking.” Genius! They make for a hilarious couple and bring much of the humour to an otherwise dark tale. Their leaps of logic are stupid as hell and oh so funny, yet somehow unexpectedly brilliant.

It would take the whole review to list all characters and tell of their stakes in the narrative. Rest assured that each character is different, bringing their own complexities and personality to the conflict. You never know who will ally with whom, who is evil. Everyone is interconnected and it’s a thrill to see how all the threads tie together in the end.

I love seeing stories told in unusual ways, such as Memento, presented in reverse and a favourite of mine. Unfortunately, Baccano went too far with its nonlinear technique. Often, I wasn’t sure how a current scene had anything to do with the plot until it caught up to another thread. The first few episodes are the same section of time told from different perspectives; however, there is nothing at the start of the new scene to indicate the plot has jumped backwards a short way. Most films that use this repeated-from-another-perspective technique have each jump start with a common event, an explosion, for example, to tell the audience we have rewound.

Despite this attention deficit storytelling, Baccano is an anime well worth watching. Just pay attention to the scene jumps so that you don’t lose yourself, and I recommend watching Baccano twice to uncover all it has to offer. I enjoyed it even more the second time around.

One of the best English voice tracks in anime. Great to finally hear a variety of accents. Definitely recommend in English. The jazz music is great too, reminiscent of the era. Intro theme is perfect, giving a sense of the fun and craziness in the show. The accompanying visuals help to remind you of the characters as well. The most notable issue with sound isn’t even a problem; the ending theme is nice, but it doesn’t match the rest of the soundtrack with its piano ballad – reminds of a Japanese Delta Goodrem.

A brutal conflict between gangs that spans centuries. From the psychotic to the funny to the weak, the cast of characters is complex and engaging. The nonlinear narrative structure, while unique and interesting, does drop a few balls as it juggles the many plot threads.

Recommendation: A must watch if you enjoy nonlinear narratives. Baccano! is an engaging, if sometimes confusing, tale of warring mafia gangs with a supernatural twist. Watch in English.