We re-join Keiichi and Belldandy a year into their relationship, still advancing at that familiar glacial pace. Urd continues to encourage them while Skuld does her best to interfere. These jokes were enjoyable in the first season, but now I find them tiring. Kei and Bell’s relationship is at a standstill. Where Keiichi’s shyness was once amusing, it has become frustrating. Furthermore, the fact that Belldandy barely participates in the narrative results in an altogether disappointing season.

Now, Flights of Fancy isn’t all bad. The first few episodes are good, for they have some actual conflict (covers the second half of the original OVA) and Kei and Bell are the focus. Similarly, in the final few episodes the couple faces a decent dilemma. It’s most of the in-between that bothers me. Filler, that is what it feels like. At least we get to see Belldandy drunk on cola – cutest drunk ever.

You can either take or leave Ah! My Goddess: Flights of Fancy. I enjoyed the start, the end, and a smattering in between; however, if it doesn’t sound appealing, skip straight to the movie.

Same beautiful art as season one.

The acting is still good and new Celtic music brings nice changes to the soundtrack. However, the weaker script that repeats many of the same jokes from season one lets the team down.

It’s the disappointment factor and the weakening of Belldandy’s character that hit me the hardest, but the heart is still there, and I did enjoy at least ten episodes.

Recommendation: Only for fans of the first season; then again, maybe not – disappointment hurts the most. 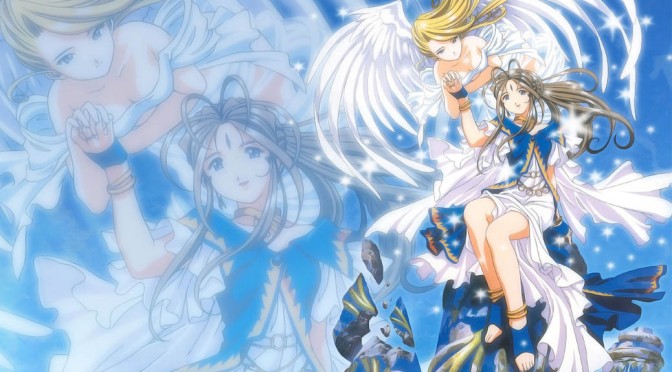 Keiichi and Belldandy are in their third year together, a peaceful life living together as human and goddess with her sisters, Urd and Skuld. However, when a fairy releases a god from the lunar prison, Belldandy’s former mentor, Celestin, descends to Earth with corrupt motives. Furthermore, Belldandy has no memory of why Celestin was imprisoned to begin with, remembering only how much he taught her as a child.

When a virus infects Belldandy, her and Keiichi’s love is put the test.

Celestin and the fairy make for good villains, as I found them sympathetic in their ideals and motives, which brings a good moral conflict. Betrayal and a broken heart can hurt more than any monster. Keiichi has grown a stronger backbone, showing development to his character without losing his heart and innocence.

There is also a side plot about a sidecar motorcycle race at the university (the motor club leaders are back and funnier than ever). Kei and Bell race together as partners – she has become a racing pro over the years – but with the virus deconstructing her mind, they may have to find someone else to race, and the strange new woman is a little too eager to replace her. I thought this thread important, for it shares a passion the characters’ with us, the audience. Too often in romance, the writer forgets to show what it is the characters do during their free time – what is that makes them love spending time with each other? They could have made this thread longer, however.

At its core, AMG the Movie stays true to what the OVA series built, and since the newer Ah! My Goddess TV drew inspiration from the movie, you can watch either series prior to this. Expect the same great comedy, romance, and sweetness from Belldandy, one of my favourite characters in anime. The movie makes the most of the higher budget by adding more action with new spells, a grander scale for the finale and increased tension. The addition I enjoyed most was the greater exploration of heaven and Yggdrassil, receiving a good third of the runtime – the series only gave glimpses. I love the idea of Yggdrassil as this super computer powered by magic.

Ah! My Goddess the Movie is the best this beloved franchise has to offer. Each time I watch this anime, it brings a little warmth to my cold, dead heart.

The same high quality art expected from the Ah! My Goddess franchise, even considering its age. With more action, we get to see greater animation and new spell effects. Love the creative design for Yggdrassil and heaven.

Great voice work, as seen in the series. In English, the actors are different from the series, though similar enough not to be a problem. I don’t know how many times I have listened to this orchestral soundtrack – the battle theme in particular.

The movie distils all that is great about Ah! My goddess into a feature length story, only with tenser drama, sweeter romance, and more action.

Recommendation: Ah! My Goddess: The Movie is my go to feel-good anime. It was the first anime I owned on DVD; I have seen it a dozen times and I still enjoy it as much as the first. I recommend watching the original OVA or new series first.

Keiichi is the unluckiest guy. If there is a hole to step in, he will step in it. If there is an accident waiting to happen, he will trigger it. Being a short guy with an unmemorable face, he’s never had a girlfriend either. Seeing such misfortune on one guy for all his life, the Yggdrassil machine up in heaven adjusts his fate. When he dials a number, his call redirects to the Goddess Helpline, and from his mirror emerges Belldandy (Norse goddess of the present).

She offers him one wish, any wish. Thinking this all some prank by his dorm seniors, he wishes for her to be his girlfriend. The wish is granted. However, since Kei’s university dorm has a no-girls policy, his manly seniors eject him onto the street, and after a lengthy search, Kei and Bell find residence in a temple. They are soon joined by her sisters, Skuld (goddess of future), who thinks his intentions impure, and Urd (goddess of past), who thinks them not impure enough!

Ah My Goddess is an anime full of heart and sweetness. It gives that warm, fuzzy feeling I like to experience every once in a while. The romance is light-hearted and innocent; the characters have goodness to them, even in the antagonists. Kei’s motor-club seniors always make me laugh – they carry full toolkits under their jackets in case anyone suffers a breakdown.

Despite the three women and one man living under the same roof setting, this isn’t a harem. Outside of the conflict with Urd and Skuld, Keiichi has to contend with hiding Belldandy’s identity as they attend university, where the campus queen, who rejected Keiichi in the past, is jealous of Belldandy’s beauty and popularity. The rich guy makes it his mission to pull her as well. It’s funny to see Belldandy clueless about human customs, getting into bad situations, but her innocence and kindness gets her out alive with Keiichi’s help. They also have to deal with devils, heaven glitches, and the occasional supernatural entity. Keiichi polymorphed into a scooter by a devil had me laughing to the point of pain.

I enjoyed the small details such as each goddess’s transport catalyst. Belldandy can travel between mirrors, Urd through televisions, and Skuld via warm water. They also recharge power with different sources – sleep, alcohol, and ice cream, respectively. Devils are weak to various things as well, which leads to many humorous scenarios; main antagonist Mara can’t handle lucky charms or resist dancing to rock, and Urd, being half devil, falls asleep to classical Enka.

Unfortunately, rather, frustratingly, I should say, the light-hearted nature of Ah My Goddess leads to a restrained relationship between Belldandy and Keiichi. The constant stalling, in particular due to Keiichi’s cowardice becomes tiresome before the end; the relationship barely sees progression after the initial foundation. This wouldn’t be such a problem if they were saving for season 2, but there it is even worse. At least the movie knows what to do.

Even so, I love Ah My Goddess. As long as you don’t go in expecting Rumbling Hearts, I am sure you will enjoy it too.

Ah! My Goddess has a gorgeous art style and character design suited to the elegance of Belldandy. The animation is good, in particular when racing or casting spells. I appreciate Belldandy’s varied and ever-evolving wardrobe – most anime sticks to one or two outfits throughout.

Though the acting is great in Japanese, I prefer the English, for Belldandy is sweeter, Urd sexier, Skuld cuter, and Keiichi funnier. Fantastic music with Nord and Celtic influences.

I enjoy the premise of a goddess coming down to Earth to live with a nice, ordinary guy. Keiichi and Belldandy make for the sweetest couple. Frustrating relationship stalling, however.

Recommendation: Despite the problems with relationship progression, I easily recommend Ah! My Goddess. I love the humour and sweetness of these characters – Belldandy always lifts my spirits.

Ah! My Goddess: The Movie

Fighting Wings is a two-episode special of the celebrated Ah! My Goddess series. It fits in somewhere after the second season, though there isn’t a direct link between the stories beyond the general premise of the show: university student Keiichi accidentally called the Goddess Hotline, summoning the goddess Belldandy, who has been his girlfriend since.

For those wanting this special to further the main plot, you will be disappointed as this focuses instead on side character, Lind a Valkyrie warrior goddess, who made a few appearances in earlier shows. When a phantom known as the Angel Eater goes on a rampage in Yggdrassil (heaven), Lind descends to Earth, the next target, where Keiichi and the goddesses reside. The plot moves at an improved pace from the second season, and sports a good amount of action with cool magic enhanced by the clean and beautiful art you can expect from the Ah! My Goddess series. The symbiotic angels of the goddesses are of particular beauty. If only the new angels didn’t have names like Cool Mint (spoken in poor English by the Japanese voice actors).

Cheesiness is Fighting Wings’s biggest flaw. With humour thrown into the middle of serious scenes, it makes you wonder if comedy wasn’t an afterthought once they realised that there was going to be none in this romantic comedy. To exacerbate matters, the humour isn’t a success, falling far short of the main series.

The turnabout for the heroines is also rather lame, far too convenient without much of a struggle or conflict. Suffering in a similar manner is the side plot of Skuld, the youngest goddess, unable to summon her angel, resolved with zero effort. With a lack of resolution against the villainy, I was unsatisfied and questioned why they bothered. Don’t misunderstand, I didn’t hate these episodes – Lind’s story has closure at least – they are merely disappointing. Yes, the voice acting is good with the regular voices from the series, and the music matches the Celtic and Nordic tunes of norm, but none of these live up to the equivalent in the first season, and more particularly, the movie.

It has left me with one positive though; I do want to see more of Lind’s story and hope she does make a return in future.

Recommendation: For fans of Ah! My Goddess only. You aren’t missing out on much if you choose to skip Fighting Wings.