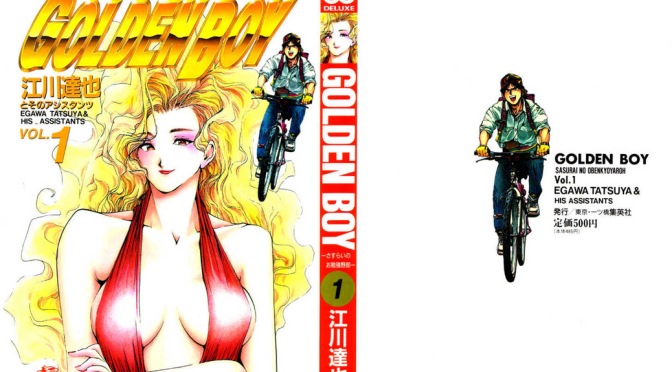 Golden Boy is best known for being a fun six-episode ecchi comedy about university dropout Kintaro, who travels around Japan working various jobs (coincidentally under women) to learn new skills and broaden his horizons. “Study! Study! Study!” is his motto. While browsing for something to read a while back, I came across the Golden Boy manga and added it to the list, curious to see how the source material fared. After all, I enjoyed the anime and most of the manga’s 104 chapters wouldn’t have made it to the screen.

Good heavens. What a disaster.

The premise at first is of Kintaro doing this variety of jobs, incompetent at every one of them yet his hard working nature and determination makes him a force for good after a whirlwind of chaos. These chapters, the basis for the anime, are done with in the first volume. Afterwards, Golden Boy goes into longer “arcs” with Kintaro spending more time in one location doing a single job. The education aspect quickly falls to the wayside. It pretends to keep up the premise but none of the quality in that first volume remains.

Golden Boy works best in single-chapter stories, where the author can extract all humorous material of any given scenario and move on before it gets old. The longer arcs are an absolute drag to get to through and painfully unfunny. A central problem is that they put the sex first and the work experience second, whereas the single chapters did it the other way around. The sex comedy isn’t funny when it so overt. Honestly, I’m not even sure if it’s meant to be a joke half of the time.

Some arcs even try to “educate” the audience on love, romance, and relationships. However, it’s the worst advice to give anyone. You may be thinking, “But Kintaro is an idiot and this is a comedy manga. Of course the advice isn’t meant to be taken seriously.” I thought that as well until I realised these are the moral conclusions of the arcs and nothing contradictory occurs.

I have never seen such a disparity in quality between adaptation and source material than seen with Golden Boy. To have one version be better than the other to some degree or vice versa is expected, but for it to be this bad is astonishing. No wonder they only made six episodes.

Recommendation: Avoid it. Watch the Golden Boy anime instead.

4 thoughts on “Golden Boy – the manga is so much worse”