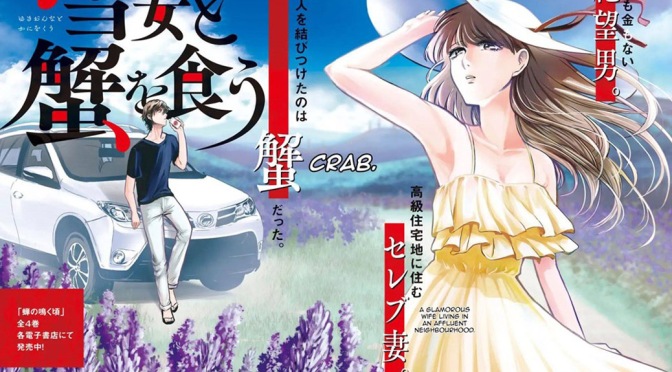 A man intent on killing himself wishes to fulfil one last item on his bucket list before kicking the bucket. He wants to travel north to Hokkaido and eat the best crab. Unfortunately, a loser like him doesn’t have the money for such a trip or such an expensive crab. And so, he decides to rob a rich housewife. Much to his surprise though, she offers not just the money he needs but also her body and company on the journey.

The road trip that follows is one of sightseeing, sex, and food with no concern for the future. Try as they might to celebrate, questions from the past and their private lives invade this last hurrah, entwining two strangers in a bond closer than what they had signed up for.

The premise has a good hook. He’s a piece of shit and we soon see that she is one as well, both of them broken by life and trying to end their grief in each other’s bodies. Classic literary novels very much inspired Eating Crab with a Snow Woman, primarily No Longer Human by Osamu Dazai, a Japanese classic and second bestseller of all-time in Japan (also featured in the anime Aoi Bungaku).

I don’t recommend this manga. I can’t fully explain why without going into spoilers, as the big twist undoes this story. So, if you are interested in reading Eating Crab with a Snow Woman yourself, do not read further in this review until you are done.

Okay, before we go on, I need to talk about the main inspiration for this series since it is relevant. No Longer Human is a quasi-autobiographical work about a man suffering from depression, distancing from society, and suicide. It’s a seriously depressing novel. Dazai drowned himself along with his mistress shortly after the release of this book.

The woman in this manga presents herself as a lonely wife betrayed by her successful husband, who has an affair – one similar in circumstance to when he first got with this woman – and leaves her with all the money she could want but none of the love. Her husband even used her holiday plans with his mistress instead. She goes along with the protagonist to escape it all and ends up falling in love with him. However, just before the suicide (they are to drown), when he gets cold feet, we learn that none of her story is relevant to her feelings. In truth, she is fanatically in love with her author husband and wants to kill herself like in his book (inspired by Dazai’s work) so that the attention garnered when the “reality is stranger and more dramatic than fiction,” it will propel him into literary history like Osamu Dazai.

He was her teacher and wrote a literary novel she admired under a pen name, which she figured out. He was much older than her, of course, and they started an affair. She did everything to support his career, including selling herself. He soon realised that she didn’t love him the person – she loved him as the future literary great. Interesting concept. Should have been laid throughout the story and not in a single chapter towards the end. This would allow us to see how she is playing this guy to achieve her dream.

This story highlights the importance of building up to a twist. When you don’t have the build-up, a final act twist will feel as if the writer changed their mind at the last minute. Yes, the twist can fit the world but does it fit the story? Take for instance Jurassic Park and image we are entering the final act, where the writer suddenly decides that the best twist would be to reveal that everything was just a virtual reality simulation. This twist doesn’t break anything but it does make for a rubbish story. Furthermore, it undermines the theme of humanity pushing too far at “playing God” with the resurrection of the dinosaurs, given now that the park wasn’t real. See what I mean? You could have a great VR story about a dinosaur park; however, the story and themes would need to be nothing like Jurassic Park from the start.

There are other moments of pain in Eating Crab with a Snow Woman as well. While he’s beating up the husband for driving the woman to suicide, she “rises from the dead” and catches up to them. This guy lay beside her “dead” body for hours and never noticed she was alive. Rubbish.

The worst section prior to the final act is this tangent lasting several volumes, where the man separates from the woman by accident and can’t find his way back to the hotel. This scenario is itself stupid enough, only then for it to waste our time as some random woman picks him up. She takes in this homeless guy and we meet several of her friends, get to know about her life, and so on, nothing of which is engaging or relevant to the grander story. Honestly, it feels like filler for the author to stall while she figures out the ending (see my Jurassic Park analogy for what happened next).

The twist isn’t infeasible. All it needed was build up in the first half of the story. While you’re at it, cut the entire side story with those other women. This could have been a great tragic manga.

Recommendation: Don’t bother. The final twist of Eating Crab with a Snow Woman is so contrary to the story prior that it kills all value. The happy ending is unearned too.