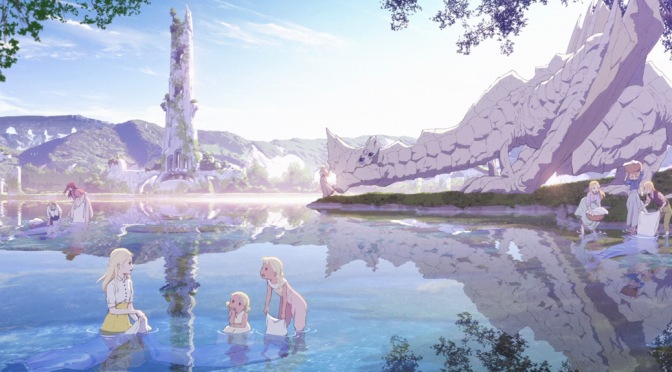 Mirai of the Future

Maquia: When the Promised Flower Blooms comes from Mari Okada, a veteran screenwriter of the industry, having adapted many manga to animation. She’s been involved in some anime I enjoy (Iron-Blooded Orphans, AnoHana, for example) and some I don’t think highly of (Vampire Knight chief amongst them). This is her first time directing. And what a promising debut it is.

Maquia, at its heart, is a story about motherhood and mortality. In this world reside the Iorph, an elf-like race that lives hundreds of years separate from the rest of the world. They pass the days weaving a magic cloth that records the totality of their memories as one endless history. Though Iorph live in peace, the world outside marches on with the unstoppable tide of progress and evolution. The royal family of the nearby Mezarte kingdom have long used the dragon-esque Renato as their symbol of power, but a disease has afflicted the creatures and it kills them one at a time. In search of a new symbol to prove their “divine” status, the king sends his soldiers to capture an Iorph and discover the secret to their long life – one will have to marry his son, if forced to.

The titular Maquia escapes the onslaught atop a sick Renato. As she flees into the outside world, she happens upon a camp of travellers, all slaughtered by bandits save for a lone baby. She pries the crying thing from her mother’s rigid fingers and sets her sole mission in life to protect this child at all costs. Her journey will take her into foreign lands of varied people, both good and bad, and there will be many challenges for someone so naïve of reality. However, she could have never anticipated her long life to be the greatest challenge of all.

I went into this film blind and I didn’t expect it to hit so hard. The main story of Maquia and her son is a beautiful one loaded with goodness and a pure heart. The question of what would happen if someone seemingly immortal had to raise a mortal in mortal society is a fascinating one. I love stories that explore the challenges of immortality. There is a hint of this in The Lord of the Rings, of course, and I recently saw the film The Age of Adeline about a woman who stops aging after an accident and must move house every decade to avoid anyone noticing. However, I’ve never seen one focus so wholeheartedly on the child of the immortal. They are usually a subplot. Maquia dedicates almost all attention to this emotional thread and it is a triumph. I won’t talk of it further. Experience it for yourself – the perfect Mother’s Day film as well.

Complementing the beautiful story are beautiful visuals. The film opens on the Iorph town in the mountains, a sparkling paradise of ivory towers, glittering pools, and greenery that lifts the spirits. It even does bloom correctly! The wider world has just as much detail and visual greatness to drink in. I love it all, from the design of the main city of Mezarte to the wrought wood interior of a village shop. Nothing feels lazy or cut short by the art department.

However, not all is great in the world of Maquia, for now I must talk of the subplots. I don’t think a single one succeeds. There are three subplots. The most important is that of the kidnapped Iorph woman forced to marry the human prince and bear his child. Then we have the Iorph man on a quest to rescue her. And lastly, there is the involvement of other nations in a war. All three threads are so underbaked that the viewer has to make so many assumptions and fill in so many gaps to make them interesting.

It feels as if there wasn’t enough screen time for everything, so cuts were made to preserve the main story. Of course, the main is most important, but if a subplot no longer fulfils its purpose, then it has to change or leave altogether.

The problems are most notable with the kidnapped Iorph. The king orders her kidnapping, marriage, and child bearing to add the Ioprh’s long life to his bloodline. That makes sense. What doesn’t make sense is just about everything else. First, the knight who leads the raid on the Iorph town. He orders the killing of anyone who resists – not a kind bone in his body – yet later scenes have him acting as if he cares for the woman. Did he fall in love with her at some point? If so, and you want us to care an iota, you need to show this transformation. How are we supposed to believe he goes from one of the most evil people in her life to someone that cares about her? Maybe that isn’t even the case and he’s the same as ever. Who knows? Maquia doesn’t show us enough to get answers.

Deeper in the same thread, I have more questions. Why doesn’t she escape when given the chance? She tries to explain that she can’t because of her daughter, but she’s never seen her and there’s no reason she can’t leave now and get her daughter out later. Will the king kill the daughter if the mother leaves? Maybe. There’s no indication of the sort because, again, there isn’t enough time in this thread. Why didn’t she escape before the birth when able? I keep waiting for it to go into detail, but nothing unfurls before the finale.

The Iorph lover’s subplot has too many spoilers to detail here, but it’s the same case of missing detail. We cut to these subplots in between extended sections of great main story content, with timeskips in each case, though the detail worsens the further we go. The problem isn’t confusion. None of these are hard to understand. They are just so listless, void of the emotion that permeates the main plot. A woman forced into marriage, separated from her own child; a man out to rescue his lover for decades – these stories should hit hard, just like the primary thread. They don’t. The contrast in narrative quality between the main and subplots is night and day.

All considered though, main story is most important and Maquia: When the Promised Flower Blooms executes that brilliantly, well enough to recommend itself despite any side issues. It is worth your time.

Recommendation: Watch it. Maquia: When the Promised Flower Blooms is a beautiful, heartfelt film I can recommend to anyone.

One thought on “Maquia: When the Promised Flower Blooms – Anime Review”