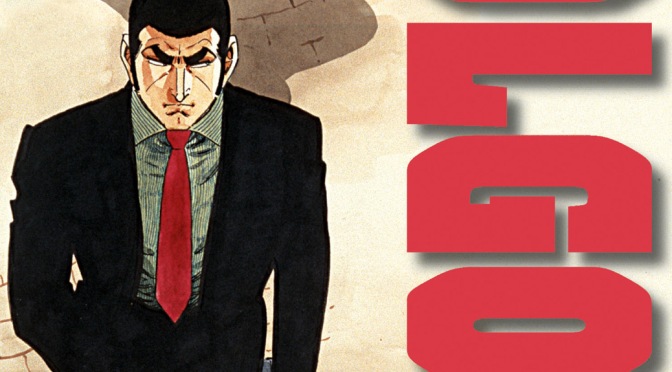 Golgo 13 is the second bestselling manga series of all time (behind One Piece) and the longest running manga still in publication at 200 volumes so far. I didn’t know this when I started. Never even heard of Golgo 13. I thought I was doing quite well at 13 volumes ahead of this review. Turns out Golgo 13 is a big deal! It took COVID-19 to pause this series for a few months after 52 years of constant releases.

This veteran manga is about the titular Golgo 13, a professional assassin for hire, willing to take on any job as long at the pay is right and the deal is straight. Try to cross him or double deal and he will kill you. If the shot is possible, even by the slimmest chance, he will make the kill.

Golgo is a James Bond type with little known about his origins – what we do know could just as well be false. He’s a man of few words who keeps to himself except when there’s a job to do or a beautiful lady in his path. It’s speculated Golgo may have dozens of children around the world due to his amazing penis (their words, not mine). He harkens to an older era of spy thriller, where plot continuity and character depth weren’t expected. Each volume is a couple of standalone stories, like hour-long episodes of a TV show, often drawing on real historical events but changing them into a “what really happened” conspiracy plot. Iraq’s weapons of mass destruction, the Tiananmen Square massacre, and Princess Diana’s death are but a few of the historical events that intersect with Golgo’s job.

I prefer this structure for this sort of protagonist, just like the James Bond novels. Had it been one long story, I would have grown bored around eight volumes in, as this character type doesn’t work for a continuous story, where you want to know and see him evolve over arcs. That doesn’t work here. Instead, each “episode” is an engaging spy thriller. I read one episode per sitting.

Included at the end of each volume are intel files profiling Golgo and his many exploits. It talks of his preferred clothing, including underwear, notable injuries, skills, and, my favourite, his body profile. See below for your amusement. A fun addition.

“…at any rate, an amazing penis.” Legendary line.

One weird writing device is the overuse of the ellipses. I’m not sure if this was commonplace in 60s manga – I’ve never seen it – but the author always has to make it clear when a character gives no vocal reaction. You’d think a simple lack of dialogue would suffice, but no, they must think “…” Not a real problem, though still a weird choice.

Golgo 13’s art in the early volumes is outdated by today’s standards, though it holds up well enough. The environments, particularly in the establishing shots, are full of clear detail.

While I do recommend Golgo 13, I should note the incomplete English translation. Only 13 volumes (a best of collection?) have had official translations (even less from fan translations) and I believe they aren’t in original order either, not that this matters with the independent story structure. However, 13 volumes is plenty enough to leave me satisfied. I have had my fill.

Recommendation: Read it. As the oldest manga still in publication and an all-time bestseller, Golgo 13 surely is worth a read.