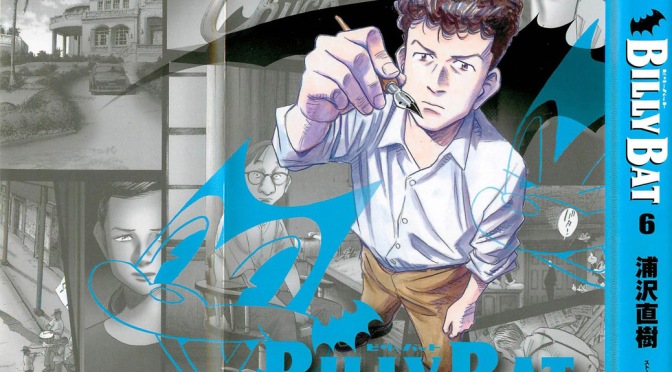 Before you go any further, just read Billy Bat. This is a manga best experienced with no prior knowledge of the ride – don’t even read the blurb. Do I recommend it? Absolutely. However, should you be someone who doesn’t take a recommendation on blind faith, then read on. I won’t be spoiling anything outside of a normal review.

Billy Bat blends reality with fiction, narrative with meta, and delivers a riveting story. The first chapter (seriously, don’t read further if you want to go in blind) opens on a bat detective called Billy answering the request of a gruff dog to tail his flirtatious poodle wife, a dame with too much beauty for her own good. Little does Billy know, he isn’t the only one on the case. A grander conspiracy unfolds until…the art loses colour? The line work turns to sketches. We zoom out of Billy’s world and into a messy artist’s studio in America, where a man hunches over his drafting table as he desperately tries to conclude the latest chapter of his comic book series, Billy Bat. This artist is Kevin Yamagata.

As if his deadline wasn’t enough, two police officers come knocking and commandeer his studio for a stake out, observing a supposed Russian spy in the next building. The Red Scare is in full effect. Furthermore, one officer claims to have seen Billy Bat’s logo scratched on a wall in Japan, years before the start of the comic. How is that possible? Kevin flies to Japan to investigate. He has no idea what he’s in for.

I didn’t know what I was in for with Billy Bat. Coming from Naoki Urasawa, the mind behind Monster and Pluto, I had high expectations yet no idea what to expect. I couldn’t stop turning the pages to see what wild turn this ride would take next.

This story draws on real world conspiracies from the assassination of JFK to the moon landing, including real people from history as key characters in the tale. The conspiracies go far deeper than you know! Importantly, Urasawa doesn’t just take the events and people from history in lazy manner, doing no work for himself. The way they incorporate into the greater Billy Bat mystery is compelling. Familiarity with the true stories makes it even better, as you know what is going to happen, yet you don’t, not really, because you have to account for Billy.

The mystery is so winding that if you read the first volume then jumped to the middle of the story, you would have no idea how it got there. I haven’t even mentioned the parallel stories across time. On paper, Billy Bat may sound overwhelming with so many characters across a dozen plot threads in different timelines, but Urasawa handles this many-pieced puzzle with such deftness that it’s easy to keep up. There are only a couple of moments of confusion.

If you’re familiar with the author’s other works, you already know to what I refer. Hell, you probably aren’t reading this because you took my advice to skip this review and go for the manga. For newcomers to his work, Monster is an easier place to start, though it is much darker (and quite different) or you could go for Pluto, a shorter manga but again, quite different.

There isn’t much more I can say about Billy Bat without giving it all away. The art is top notch, of course, as expected from Urasawa. It’s a pleasure to read his work every time. Hope you enjoy this or one of his other works as much as I do.

Recommendation: Must read. Unless you don’t like mind-bending stories whatsoever, I see no reason not to read Billy Bat.