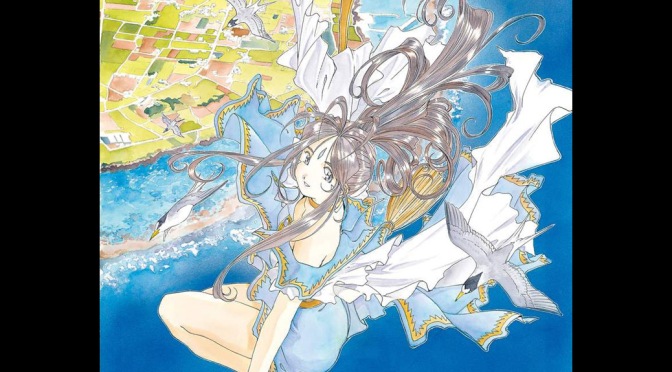 Oh! My Goddess (sometimes called Ah! My Goddess) was one of the first anime I loved after having seen the 5-episode OVA and movie. It would later receive another adaptation with the first season retelling the OVA and several other volumes to be more manga accurate. It was enjoyable, but still the same section of story, more or less. The second season came about and was just comedy slice of life, much to my annoyance. Season 2 felt like a waste of time. The lack of closure has bothered me ever since.

My dive into the world of manga had me thinking of incomplete anime I could conclude in the source material. Oh! My Goddess was my first candidate. It has taken a while – 308 chapters over 48 volumes – but I did it. Does it have everything I’d hoped for?

The first shock came to me with the art of chapter one. To me, Oh! My Goddess has always had characters designs in a beautiful style I cherish. However, I find the manga starts ugly. How did they get the anime designs from this? I considered the possibility of a redraw of the manga that I hadn’t heard of, but the covers for later volumes showed what I was used to. And I must say, it is impressive to see how quickly the art improves from chapter to chapter. The art is years better within a few volumes. Thank the goddess, for I wouldn’t have been able to tolerate that Belldandy with the melting face for long. Oh! My Goddess ends up with elegant characters, expressive features, and detailed backgrounds where needed. The chibis are adorable too.

The premise in brief, for anyone not familiar with the franchise: University student Keiichi accidentally calls the Goddess Helpline and the goddess Belldandy answers his call with one wish. Thinking it’s all a joke and as a “manlet” (his words) with no chance of getting a girlfriend, he wishes for someone as beautiful as Belldandy to stay by his side forever. Wish granted! Since his dorm doesn’t allow girls, he finds himself homeless with his…girlfriend? They settle in a temple and begin to go about daily life in this unexpected relationship. No one at uni can believe someone like him got a woman like her. Her two sisters, Skuld and Urd, soon join them on Earth and the pandemonium only increases.

The anime’s second season that annoyed me so much turns out to be canon. It’s not exactly the same, but content is in line with the manga. See, Oh! My Goddess the manga stops main story progression – the Keiichi-Belldandy relationship – around volume 5 and doesn’t restart until the volume 38-ish mark. That is over 30 volumes of no progress and I could it feel more acutely with each passing chapter. The issue isn’t that the “filler” is bad (I’ll get to that in a moment), but rather that we don’t seem to go anywhere. Doesn’t even have the decency to focus on the main thread for one in four volumes – would still be a bad ratio, by the way, though it would be something. It recalls when classic Naruto was in filler mode while waiting for Shippuden. A filler arc would finally end and you’d start the next episode thinking, “Are we finally done?” only to have more filler molest you.

This middle section of arcs across 30 plus volumes focuses on side characters and most are decently fun. Urd arcs will often play on her demon half with visits from other demons, included her powerful demon mother (different mother to the other two sisters). Hers are quite good. Skuld arcs, on the other hand, are more child-like and about growing up as she crushes on a human boy or relies on her gadgets to solve all problems. I didn’t find these good or bad either way. Keiichi arcs are very much university centric, especially involving the motor club, where he has to build or repair some vehicle and partake in a race. These are among the better sub-arcs as author Kosuke Fujishima’s gearhead nature spills across the pages (he has a couple of other racing-focused manga). The background art also shines in these segments.

As for Belldandy arcs, they generally involve a challenge from a heavenly visitor. Someone either wants to bring her back or just wants to toy with Keiichi. These are among the weakest arcs. For one, they are all similar. What is it with the adult male gods/demons appearing as a child to mess with her? I don’t recall a single adult male god throughout the series (turns out the one featured in the movie is non-canon). These arcs could have been the focal points for progression, but they don’t amount to more than weird magical trials. Belldandy shines in other people’s arcs (she’s my favourite character).

My favourite of the sub-arcs has the interdimensional whale. Keiichi’s motor club seniors are going away for a time and need him to look after a couple of boxes of expensive parts. A couple of boxes ends up being a garage full. Since temples don’t have garages, they store it all in lounge room, but now they can’t use the lounge! Skuld has the idea to build a device that can create a TARDIS effect – “It’s bigger on the inside.” The intention is to expand the interior of the lounge room without affecting its exterior volume. However, the device doesn’t operate as planned and expands the room to infinity. They have no idea where their things are in this space. A creature called Schrodinger’s Whale soon appears before them, and it can navigate the space with ease as a being of negative dimensions. It’s an interesting concept clearly inspired by Star Trek (they are watching The Next Generation on TV before meeting it). I like those arcs that explore a mysterious concept. But no matter how much I like these, the total absence of main plot is nothing but infuriating.

Why didn’t they make more use of Heaven as a location? There is so much one could do on another world of immortal beings that blends Norse mythology with technology. The movie had more of Heaven than the manga series did before the final arc. So much untapped potential lay wasted.

So, after all these volumes, I reached the final arc that sends Keiichi and the three goddesses into Heaven for a series of trials that will put Keiichi and Belldandy’s relationship to the ultimate test. It is a good arc, ending in a lovely conclusion, except for one moronic detail. There is a canonical explanation for the lack of relationship progression. I kid you not, magic prevented development. That has to be the worst defence put forth by any author in the history of literature. Other than that, it’s a fine end.

I got my closure. I simply wish the journey there had been better.

Recommendation: I can only recommend the Oh! My Goddess manga in full to fans of the anime that want closure. For the uninitiated to the franchise, the first season of the anime followed by the movie is the best experience, ending with volumes 39 to 48 of the manga should you want that final tie of the ribbon.