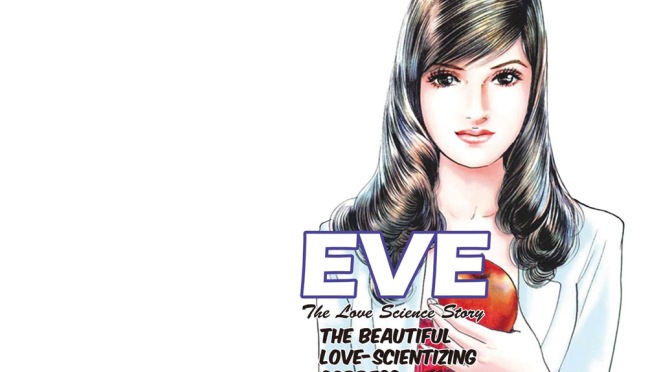 I picked up reading manga again about a month ago and have since been on a tear, completing or starting a few dozen series. Unlike when I started my catalogue of anime, where I compiled a list of 500 titles based on the slightest recommendation, I’ve taken the explorer’s approach to manga. I already had 20 or so series in mind to read, but outside of that, I’m going in as if browsing a bookstore alone. Does the cover grab me? What about the title? That blurb sounds interesting. Why don’t we concentrate of one genre’s section of the store?

This blind dive does find more duds than successes, but it’s fun to explore and I never know what I’m going to get.

One hidden gem I found that I’ve never seen anyone mention is Eve: The Beautiful Love-Scientising Goddess. It follows the titular Eve and her assistant at a love research centre. Clients with relationship troubles – sometimes unknown to them – come to Eve in desperation for advice. She has all sorts arrive on her doorstep from playboys to desperate women and everything in between.

Most surprisingly with Eve is how much good relationship advice it has. Anime and manga don’t have the best track record in this department (see Rent-a-Girlfriend). The first case is of a man who fell for a “business date”, which involves a materialistic girl asking her new sugar daddy boyfriend to buy expensive things. After the purchases, she disappears. The items turn out to be fake, of course, and the girl received a commission for each sale. Of course. No sensible person would fall for this. However, take a lonely guy with no idea how to talk to women, with his head in clouds that true love will only drop into lap if he waits long enough, if he’s nice enough, and you have a grade A sucker. One of Eve’s pieces of advice to him is to go for quantity over quality. Yes, you might meet the perfect person in an unexpected place, but to find “the one”, it’s much better to meet lots of people (you don’t have to sleep with them) and see with whom you form a connection. Hell, those who wait around are likely to miss the ideal partner because they live under this delusion that the one will be perfect at first sight. How can they be perfect if you know nothing about them? And how can you get to know them if you don’t talk?

The cases follow a detective mystery structure, wherein a client will approach with what he or she think is the problem, but as Eve investigates further, there’s more to the story. She will talk to friends, family, colleagues, and exes to complete the picture before arriving at a conclusion. They test ideas and theories, much like a crime case, and adjust based on findings. And along the way, some will challenge her views and her own love life, so there is a through line that carries across the cases. A case or two even get personal.

The mystery compels you to finish the case. The characters make you want to read the next one.

A favourite case and character combo of mine is that of Leon, the rich playboy. This guy struts into the centre with such confidence that he doesn’t even see he has a problem. He’s God’s gift to women after all. I love the way Eve crushes his ego by talking to his exes to see what they actually thought of him. He becomes a permanent character and the manga is all the better for it. His dynamic and humour with Eve is great.

Apart from so-so art, Eve’s main negative point is the insistence on positive endings for each case (except one, if I recall). Sometimes, it would be more satisfying and interesting if it didn’t work out, the lesson being to pick yourself up and move on. I suppose that might be too heavy for the tone intended by the author. Though Eve deals with serious relationship issues, it keeps matters fairly light-hearted and away from dark territory. You won’t see a guy blow his brains out because his girlfriend cheated on him in this manga, for instance.

I had a good time with Eve, finishing all seven volumes in about a week and I could keep going for more. It is complete, however, to a satisfying end and so, as Eve would suggest after something ends, it is time to move on and see what else is out there.

The characters are a little…chunky in the face. Everyone has the same face type, which is off-putting at times when all the bodies are different. In fact, I confused a panel from another of the author’s manga with Eve because the protagonists look the same. The environmental art is a little rough. If you pause to take it in, you notice how unpolished it looks. It’s decent overall.

Recommendation: Read it. Eve: The Beautiful Love-Scientising Goddess is a fun read, easy to pick up for a few chapters at a time, and full of good relationship advice built on a framework of odd characters.