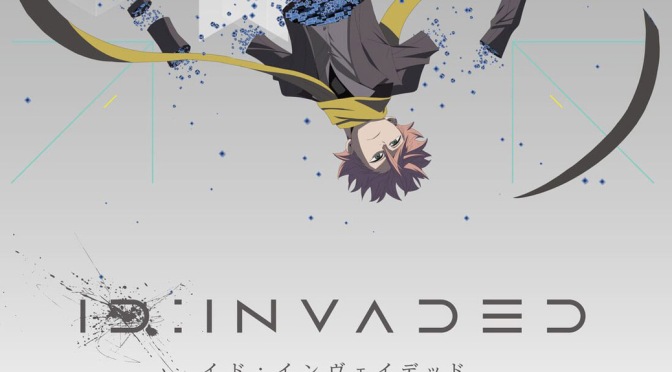 Every great crime mystery has three components to success. The first is an interesting crime that generates plenty of questions and mystery. This doesn’t mean it has to be something crazy like a dead clown hanging from a chandelier with foam sword in one hand and nuclear detonator in the other. It can be something as simple as a shot to head during lunchtime, dead body in the apartment, yet the neighbours heard nothing. The second component is engaging characters, most notably for the detective protagonist and the main suspects. You want to look forward to these characters parrying words. And lastly, to engage the audience fully, the crime must be solvable before the big reveal. You don’t want to make it obvious – keep them guessing, unsure of their theories – but the pieces must be present.

ID: Invaded is about a detective agency that can investigate cases by diving into the unconscious minds of criminals by using a machine called Mizuhanome. Our main detective, Sakaido, is a murder himself after avenging the death of his family, for only a killer can safely enter into the mind of another killer. While he investigates on the mental plane, rookie detective Hondomachi hits the streets to interview witnesses and suspects.

The look of the virtual world in the target’s unconscious is cool. The opening scene has Sakaido in pieces with digital cube particles instead of blood. After he pulls himself together, he needs to reconstruct the scene physically from the fragmented reality that is the human mind. It recalls games like Ghost Trick and Remember Me. I love this representation. There is no denying the visual engagement. It’s weirdly awesome. However, this very concept is also ID: Invaded’s greatest flaw.

What Sakaido is looking at, these pieces to a murder mystery, are abstract. Even the faces on the people in the unconscious realm aren’t accurate. They are an amalgamation of faces remembered from one’s life, just as it is in your dreams. This means that the clues don’t mean much until we see the answers. It’s like solving a 1000-piece puzzle of pure white that doesn’t reveal the picture until all pieces are in place. The audience doesn’t have the opportunity to solve the case ahead of time – as you would in an Agatha Christie novel – without relying almost exclusively on guesswork, and in a crime story, this drops audience engagement to a level no author wants.

Now, the visuals do make up some of the loss, as mentioned earlier, as do the unusual characters on both the law enforcement and criminal sides. One of the criminals, called “The Perforator”, likes to drill holes in people’s skulls. Always delightful. Sakaido is also an interesting protagonist with his status as both criminal (still in jail) and detective. Sorry, “brilliant detective” as the mind detectives call themselves. Side note: it took me a while to realise that brilliant detective refers to their job title and not a token of praise. Poor choice of name.

I’m not sold on Hondomachi. She feels like a character design first (adult that looks like a teenager) and personality second, though her role in the story is interesting. The Inception-like system of her in the real world on the job while Sakaido is in the brain finding clues works well. It adds a nice dose of tension when everything is parallel in real time. Incorporating the Mizuhanome in the crimes itself is another good choice that heightens the stakes. It isn’t just a tool. One could almost call it evidence in the grander story, similar to the PreCrime unit in Minority Report or the Sibyl System in Psycho Pass. I like it when wild science fiction concepts go all in on the unique selling point.

ID: Invaded is a good anime, all aspects considered, and its unique nature means you aren’t looking at “more of the usual”. So I do recommend it if you liked any of the titles that I referred to throughout the review. It’s a story I would like to see the author take another crack at to elevate it to greatness.

ID: Invaded has one of the most distinct art styles for faces, notably in the eyes. Oddly successful. The abstract design of the unconscious is great.

Several solid tracks accompany the series – I’ll be listening to the OP & ED beyond the final episode. The mystery music of ethereal piano notes and sinister violin adds much to the scene. The acting is strong too and you can go with either language to suit your preference.

A former detective turned criminal investigates cases by diving into the minds of criminals via a machine. This cool concept is a little too abstract for its own good, as it doesn’t give the audience the information needed to solve the case until the big reveal.

Recommendation: For sci-fi fans. I recommend ID: Invaded to fans of Psycho Pass and Ghost in the Shell for its unique take on the exploration of the criminal mind to solve mysteries.