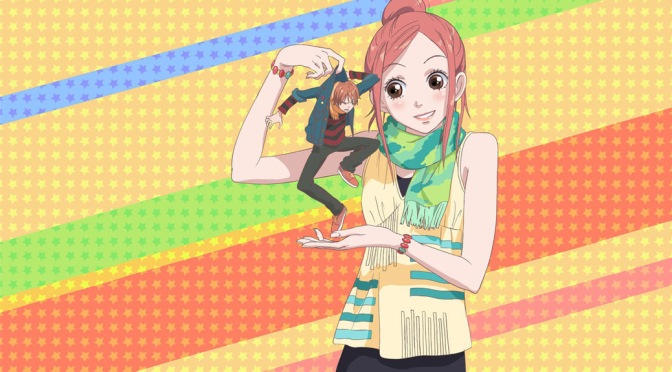 From Me to You

Lovely Complex takes the usual romance trope of tall guy with shorter girl and flips it. She’s the tall one (“Amazon”) and he’s the short one (“midget”). Risa and Ootani are two high school students looking for love, her insecure about being taller than every other girl and him insecure about being so short, even for a Japanese boy. His ex-girlfriend is now with a tall guy. These two friends – often referred to as a comedy duo by schoolmates – are helping each other find love. However, Risa soon develops feelings for Ootani beyond friendship, but how is she to convince a guy who only sees her as a freakishly tall friend?

This couple is different from most anime couples in that they start as friends. The conflict doesn’t derive from what they think it does – their heights – but from the fact that they are friends. It is easier to start an intimate relationship with a stranger than it is with a lifelong friend. She takes longer than she should to realise that she’s in love with him, while he thinks she’s just joking. Just a joke between friends, right? However, a relationship founded on friendship is more likely to succeed and have deeper roots.

Their relationship is endearing. They’re nervous about the most trivial matters, but that’s what it’s like in early love. Best of all is how believable they are as friends first. The comedy duo dynamic works at both delivering tons of comedy and selling us on their friendship. From there, the romance builds.

Early conflict comes as they look outside of themselves. Ootani is interested in another girl, Risa is interested in another guy – the typical situation (this is before Risa realises her true feelings). Once Risa fixates on Ootani, it becomes a back of forth of “will she, won’t she,” and, “Will he, won’t he.” Will she confess? Will he accept? Will she try again? Will he change his mind? And this is all good except for a couple of annoying and contrived scenes to set the relationship progress back to square one.

In an early episode, Ootani kisses Risa, ending the episode on that pivotal moment. But then next episode, he says, “Oh, I don’t remember doing that. I was sick.” A later episode has him pour his heart out with the camera close up on his face, before it pulls back and reveals that she was asleep all along. This type of moment happens several times across the 24 episodes and only make you pinch the bridge of your nose in frustration each time. There is even a moment like this ahead of the climax!

They are cheap and lazy solutions to delay progress in the relationship. You get maybe one use of these before the viewer finds it contrived and tedious. It would also help if the roadblock were more believable. No one would believe that Ootani doesn’t remember kissing her (not even if he were trying to pass it off as a lie). A believable example of this happens at the end of Monthly Girls Nozaki-Kun. It would have simply been better to have setbacks that are more dramatic. The moment Ootani tells Risa that he’s not sure he feels the same way as she does is a perfect example of stalling the romance correctly.

Even with these scenes accounted for, Lovely Complex is still fun. Yes, these moments are artificial setbacks, but everything between them still works. And much to my delight, we have a complete arc here. There is a definitive coupling, a proper and satisfying conclusion, and no loose ends.

The art is easily Lovely Complex’s weakest quality and hasn’t fared well with age. Some of the visual humour, especially the facial expressions, is still hilarious.

Great voice acting for the two leads. You can hear two real people bickering back and forth like a real couple. Supporting cast is good too.

A tall girl has trouble convincing her short best friend that they should be a couple. While it does have a few frustratingly clichéd moments to prolong the conflict, Lovely Complex is a successful romantic comedy that flips a classic trope on its head.

Recommendation: For rom-com fans. Lovely Complex may be a little old now, but it holds up with a fun couple and some hilarious hijinks.