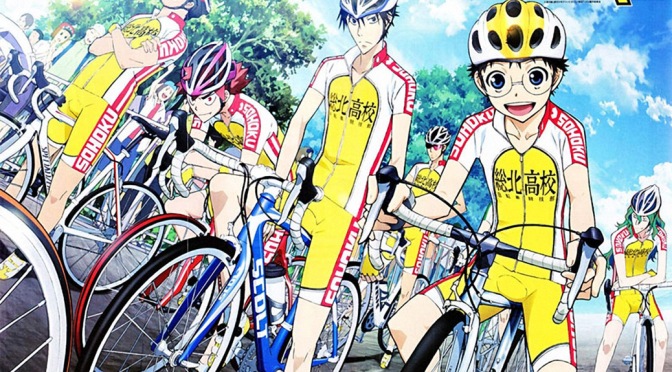 Onoda is the type of kid who cycles four hours each way to Akihabara instead of taking the train because it’s free. A train fare worth less than an hour’s work saved at the expense of eight hours cycling? I love this kid’s dumb innocence. Seeing Onoda tackle the incline to school with ease, cycle club member Imaizumi challenges him to a race and soon ropes him into joining the club.

I was going to watch just a few episodes of Yowamushi Pedal before dropping it, but I ended up finishing the season. The protagonist is so likeable and the technical explanations do a good job of engaging you in cycling as a sport. Onoda makes an outgoing friend in Akiba, Naruko, who teaches him how to gearshift like a pro and draft while chasing a punk in a car that threw his trash out the window. It’s a tad unrealistic, of course, but it’s good fun.

Yowamushi Pedal gives off similar vibes to Haikyuu (not as good though), so if you liked that, you will enjoy this. Where Yowamushi differs is in the protagonist, Onoda. What personality type do you think of when someone says “boys’ sports anime”? Most would imagine an energetic, hot-blooded guy with endless determination to be the best, always the centre of attention. Onoda is the opposite (he’s almost Mob from Mob Psycho 100 levels of opposite). He’s timid, introverted, doesn’t like having the spotlight, barely speaks up for any reason, and has confidence in the negatives. He’s not someone you’d cast as a shounen sports protagonist.

However, he works as lead in Yowamushi because one, the explanation for his sporting ability makes sense (they didn’t have him scale the mountain the first time on a bike after some ancient master “saw something special” in him), and two, his evolution from this starting point is believable. The supporting cast works on his aforementioned weaknesses.

Naruko teaching him how to cycle properly and not just on sheer determination is perfect. He justifies his place as a support character and it establishes who he is (he’s the sort to help a newbie in need). Great way of inserting shounen “ability exposition” in a natural manner, by the way. Onada’s cycling team is a good make up of characters. You have some of your usual archetypes here, though an unusual one is Makishima, a creepy looking dude with long green hair and a bizarre notion of what can pass for fashion. On first introduction, he’s a bit of douche with his bluntness, made worse by his attitude and appearance, but as time goes on, you learn why he is this way, and how he cares about the team even when rude to them. He provides a balance to an otherwise “good guys” team.

Unfortunately, the same can’t be said for the antagonists. The competing racers aren’t interesting or memorable. Well, one guy is memorable, yet for all of the wrong reasons. The antagonist focus goes to (I had to look up his name) Midousuji, a design mix of the Cheshire cat meets Orochimaru. He has a broad grin of grinding teeth, bulging eyes, a reptile’s tongue, and a personality that transcends human limits into the comical realm. With a personality so over the top and played up to a grotesque degree, you can’t take him seriously, even when he strangles teammates. He’s so ridiculous that I think he walked into the wrong anime. He does not fit. At all.

Worse still, he just doesn’t stop with the cackling, the grinding teeth, the leering, and the lolloping tongue. Terrible antagonist. I find myself more interested in the small rivalries within the team than the main conflicts against this guy.

As for the cycling itself, you know, the core of the show, it’s solid. You won’t feel lost if you have no idea how it works at a professional level. I dare say, you may even find the intricacies of working as a team and pushing the man and machine symbiosis to the limit surprisingly interesting. It isn’t about pedalling as hard as you can.

Yowamushi Pedal has a good amount of animation, but as a sport that’s constantly in motion, they had to rely on CG roads and environments when cycling, so you will need to get used to it. Animations repeat often as well, but seeing as cycling is a repeated motion, it isn’t a notable problem and the camerawork mixes things up. I like the character designs, reminding me of Haikyuu with the easy distinction among the cast.

Strong acting. Honestly, even if you aren’t into cycling, the characters keep you entertained. The background music is solid as well, though the OP and ED aren’t hype enough for a sports anime.

An otaku who cycles long distance to save money has his arm twisted into joining the school racing team. Yowamushi Pedal follows the standard sports formula, not that this is a bad thing, but it doesn’t take any risks.

Recommendation: For sports fans. Yowamushi Pedal is the perfect example of a sports anime that delivers every aspect to a good standard without excelling in any way either. Good for sports anime beginners.