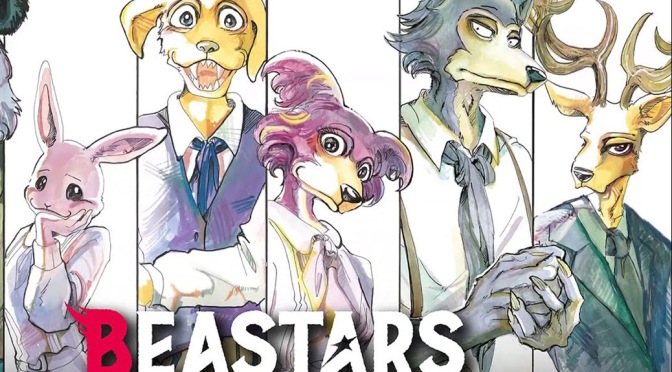 Similar: Land of the Lustrous

I can’t believe I am saying this – I mean, it would have happened eventually – but I still can’t believe there is a great looking CG anime. Not only that, it has a great story too.

Beastars is Zootopia meets high school anime drama. In this world, all animals live together in a passable sense of harmony. We focus on Cherryton Academy where a drama club prepares for a grand performance before the school. Our protagonist, Legosi the grey wolf, hides in the shadows behind the stage lights. His shyness is nothing like the red deer Louis, who commands enormous respect driven by ambitions of becoming a Beastar, the highest possible honour for any animal, achieved only by demonstrating excellence for the betterment of society.

The story kicks off when a carnivore kills Legosi’s friend, an alpaca. In a twist of world building for the premise, carnivores are the discriminated group in this world. They have the presumption of guilt against them – “Most kills are by carnivores, therefore all carnivores are killers.” Legosi does everything he can to go unnoticed at school. Even so, everyone finds his large stature and sombre tones intimidating. He must be up to something! On the opposite end, you have Louis, a deer that desperately wants to be a carnivore. He wants that strength, that power, that intimidation and though he is friends with Legosi (or is he?), he resents the wolf’s efforts to throw all his gifts away. I love these two characters. They by far and away are the stars of the show. The complexity of character versus their place in the world and the dynamic with those around them is compelling. You want to see what they’ll do next.

Their relationship begins when he catches her scent one night and almost kills her. The next day, he sees her at the garden club when tasked with collecting flowers for the stage play. She assumes he’s like the others and does her thing on him. Legosi manages to escape her evil clutches (you go, Legosi, stay away!) but can’t stop thinking of her. This unconventional relationship works well to complement Legosi’s theme of fighting against his nature, as any good subplot should do.

This is a good time to talk about the world building. Beastars has good social world building – the “speciesism” against carnivores, Louis craving for strength he can’t have, Legosi’s personality through environment, to name a few. However, it lacks physical world building. How does this world operate? How is it that all of these different animals can live in the same place? How does anything work?

To put it simply, think of how our world accommodates people with different disabilities. Imagine there was a story focusing on a paraplegic. And in that story, we are told that he lives a rather normal life considering his circumstances. The paraplegic travels a lot, yet the story never shows us how he manages this (also imagine you don’t know how this works in real life, so you can’t fill in the gaps). They would need to show the wheelchair, the mechanisms of an accessible home, and the ramps and lifts around the world. Go into detail.

Beastars, for the moment (it will eventually go into detail, surely), assumes too much of the audience’s suspension of disbelief. “What do you mean you don’t see how you can have a city that works for both the elephant and the mouse – isn’t it obvious?” No, it isn’t. I’m not asking for the Encyclopaedia Beastarica. But I do want something. Keep in mind that this isn’t the same as classic Disney films with animals instead of humans, like Robin Hood, where these details don’t matter. Beastars is going for a serious take, made all the more important when the conflict centres on the dynamics of this world.

One can’t help but draw comparisons to Zootopia with its brilliantly realised world. That film managed to create a world easily five times more complex than Beastars did and in less than half the minutes. First to mind is the detail of how a street vendor sells to a rodent class animal by dropping the drink down a chute to collect at the ground. Beastars has glimpses of great world building. In fact, the best episode is all about expanding this world through the illegal meat market and Legosi’s reaction to it. This episode elevates Beastars beyond an interesting premise. The goat with price tags hanging off his fingers for sale is one of the most unsettling moments in anime. Give me more.

Finally, I can’t end without going into the art, specifically the CG. Like all of you, I imagine, hearing the term CG in any relation to anime makes me uneasy to the stomach. Good CG doesn’t exist on a budget and the reason they use it for anime is budget. An association with CG characters alone put Beastars on my “not interested” list. It wasn’t until a friend raved about it that I moved it to the watch list, yet with a sense that it would be an endurance test. Imagine my surprise when I open Beastars and it isn’t just better than other CG anime, it is great. Studio Orange did a fantastic job at making the 3D look like anime 2D. The trick is in the lighting, colouring, and outlines to mask the 3D coupled with 2D for environments where suitable. Look at the screenshots in this review. They seem 95% made in 2D. It is a truly impressive job.

It isn’t perfect. The 3D stands out much more in motion, particularly in mouth movements. In traditional animation, one’s mouth jumps from position to position with perhaps extra frames in between for the larger movements. CG however, is smooth from one position to the next – like reality. The increased smoothness of CG animation makes it look worse when trying to be 2D. You need the mouth to jump frames for it to work. Smooth animation works when aiming for a high quality CG scene, such as a game cutscene or trailer. Such quality is expensive though. Beastars needs to, ironically, lower the animation in parts to improve the final effect.

I am excited for more of Beastars. I’ve started on the manga at a friend’s request, as he doesn’t have the patience to wait for spoiler discussions. Don’t miss out on this one either.

The CG is great in Beastars, as unbelievable as this sounds. This CG is a success with real effort in texture, lighting, and a mix of 2D. Only the unnatural smoothness of the animation really stands out as a problem. I love the stop motion opening.

The original Japanese track is superior here. The dub is fine, if that’s what you always go for, but the Japanese casting and energy is notably better. Great opening song to go with the stop motion. The rest of the music isn’t memorable, however. The script is solid and better written than the manga – more dramatic.

A wolf deals with school drama as he develops feelings for a rabbit, his prey. With great characters, high conflict interspecies drama, and an engaging premise, Beastars is a hit. That said, it needs more in the world-building department.

Recommendation: Watch it. Even those averse to CG anime should watch Beastars.