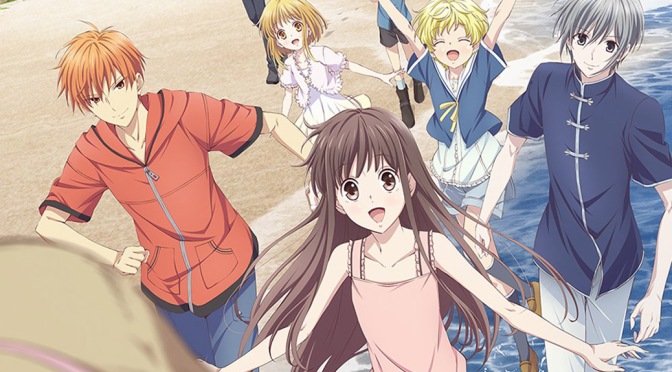 I have known of Fruits Basket for a long time. It was a big deal shortly into the new millennium and I’ve never had the urge to watch. A reader requested it, so I guess I have to give it try at least. To my surprise, it isn’t as bad as I had anticipated. I did stick to the new 2019 edition where the art isn’t hideous like the 2001 version, which made all the difference (goes back to the higher standards in art demanded by the core demographic, as I mentioned in Snow White with the Red Hair).

Tohru Honda is a girl down on her luck. She lost both parents, her grandfather can’t keep her any longer, the rest of the extended family hates her, and her tent barely holds it together in the woods. All of that changes when, one day, she stumbles upon the house of Shigure and Yuki, a popular boy from her school. Alongside Kyo and others, they make up the Souma family. However, should any of them hug the opposite sex, it would reveal their true form as an animal of the Chinese zodiac. Seeing her pitiable state, they agree to take her in on condition that she never reveal their secret.

Young girl surrounded by handsome boys, each one fitting an archetype of the reverse harem as they obsess over her. This is as classic shoujo as you can get!

Fruits Basket was an influential manga of the genre in the 90s & 00s, which can be a curse, especially if it is so easy to imitate and, more importantly, outdo. There is no complexity here, whether of story or of character. The reverse harem shoujo formula is as plug and play as the shounen battle anime. This isn’t like Evangelion, Full Metal Alchemist, or Death Note, where you can copy them, change a little, still expecting to have something decent of your own. It takes more than the formula. Every successful anime has galleries of imitators, but the best anime have few that come within arm’s reach of competing in quality.

As such, if you have any familiarity with shoujo anime/manga, nothing – and I mean nothing – will be of surprise in Fruits Basket. It doesn’t feel outdated after the polished remake, yet it doesn’t feel new.

However, let’s look at it for what it is or for the uninitiated.

The protagonist Tohru, I am not a fan. She is too nice. She’s nice it that annoying sort of way, where if she were a real person, you’d suspect it’s all a façade to cover the truth that she abuses animals in private. I exaggerate of course. She is impossibly happy and unbeatable in life to the point that conflict doesn’t matter. The story is structured as a collection of subplots for each character, as seen through the eyes of Tohru. We go through several of the zodiac boys with their tragic backstories and her school friends. Throughout this, nothing makes Tohru flinch. She is an upbeat, sunshine-filled, empty vessel to navigate the subplots. Fruits Basket desperately want you to feel sad for her, from the endless tragedy in her life down to the opening ballad carefully crafted to tug at your heartstrings. When you have a character as unrelatable as Tohru, none of this moves me a millimetre.

The supporting cast is more interesting and the reason the core demographic is here. Each boy fits a type, so one can pick a favourite. It’s unrealistic to have a teenaged girl surrounded by guys like this, but fans wouldn’t have it any other way. There’s yaoi baiting, naturally – wouldn’t be shoujo otherwise.

The boys’ conflicts centre on the zodiac “curse”. The curse is simply the transformation, but it is enough to wreck their relationships and their lives. The shouta kid (he’s older than he looks, they swear) transformed into a rabbit when his mother held him, which filled her with disgust and anger, driving her to attempted suicide. In the end, the Dragon of the zodiac erased her memory of him to give peace. This is a common story with the members of the zodiac. Some fall in love, their partner can’t handle the truth and have their mind’s modified, while the zodiac has to live with the memories and broken heart. The stories are simple and as I said earlier, done to death. You should see it all coming.

As for the antagonists – if you could even call them that – they are comical. They are the flattest characters of them all. The head of the Souma family just leers at everyone and makes threats. I don’t know how anyone can keep a straight face at the things she utters. The most hilarious villains have to be Tohru’s extended family. Her cousin, who is supposed to be respectable and wants to be an officer, goes on a rant about how she’s a slut for staying with boys. How comically flat can you get? These people are funny, not threatening.

If one were of the core demographic for Fruits Basket, a tween girl, there would be stars in her eyes as she dreams of her best boy and yadi yada lovey dovey stuff. For everyone else, there is plenty better shoujo anime out there. If you want a comedy that parodies the genre, I can’t recommend Monthly Girls’ Nozaki-kun enough, or you’ve got Little Witch Academia and Kodocha.

The production across the board is much improved over the original, though it isn’t anything to write home about. The art is pleasant enough to match the story’s tone. Could do with less full screen bloom. Go easy on my eyes, please.

The acting and the script is fine middle-of-the-road quality that gets the job done but won’t stick with you. All that stands out is the extra mountains of sugar. The first opening song is a little much in forcing you to feel sad for Tohru.

An orphaned yet upbeat girl finds lodging with a group of handsome boys that turn into the animals of the zodiac when hugged. She grows close to them as she unravels their mysterious pasts. Each character gets their time in Tohru’s arms for her to learn their backstories. None of them rises above average.

Recommendation: For shoujo fans only. You have to be a shoujo fan to enjoy Fruits Basket. It is as typical shoujo anime as you can get.