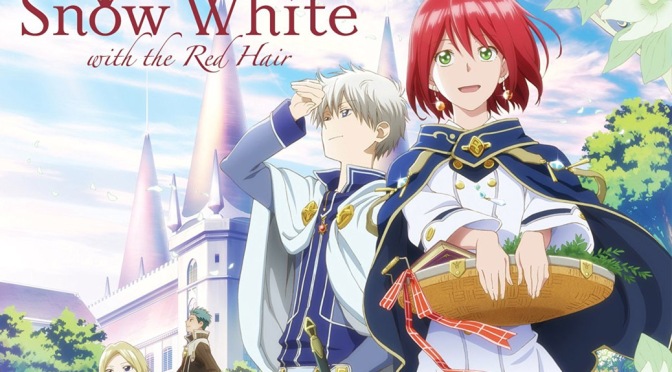 Similar: Yona of the Dawn

The Story of Saiunkoku

Of the shoujo story types, I tend to like the “ordinary girl draws the attention of an important guy (or the reverse)” type the most, especially in a fantasy setting. I like how it gives a clear coupling to the romance. I never hide my dislike for harems (inc. reverse harems) due to the lack of direction in relationship developments – doesn’t help that the characters are often atrocious. By giving me an indication of where the story intends to go, I don’t feel like I am wasting my time before things even begin. The fantasy setting is an added bonus, as it requires more effort in world building.

Snow White with the Red Hair follows a young herbalist in training called Shirayuki with shockingly red hair that draws much attention, including the unwanted infatuation of her nation’s prince. She only manages to escape life as a concubine when Prince Zen of the neighbouring country of Clarines comes to her rescue. Her new ally also opens the opportunity to become a palace herbalist. Passing the exam – and curing the prince from a poisoned apple – sets her on a path to success she could only dream of in her sheltered life.

Seeing this premise of a girl with [insert profession here] meeting [insert rich handsome guy here], I assumed her skill with herbs would be irrelevant. This is a common failing of shoujo anime and rom-com films. How often is the protagonist a journalist/architect/ad executive/author/etc. and it never plays a part in the story? You know it’s only there because it would be weird if she didn’t have a job. I assumed the same of Shirayuki. When a scoundrel kidnaps her, the expectation is that someone rescues her or she lucks her way out. To my surprise, however, she uses her knowledge to burn the right herbs together for a paralysing effect on her attacker. Alright! That’s what I want to see. She still needs some help in the end, but she did something and used her brain. I like an active protagonist with intelligence. Shirayuki endeared herself to me with that single action.

Further on, her studies and career as a herbalist continue to hold relevance throughout the story. We see her studying new mixtures, experimenting with ideas, researching plants, and taking exams. Probably my favourite element of the story. It adds depth to the world and makes her environment lived in.

The romance with Prince Zen is typical shoujo fare and works, for the most part. You do have to suspend your disbelief that a prince of the realm can have a public relationship with a commoner against little opposition, but that’s the way of the genre. They do make for a good couple and complement each other’s qualities.

Where Snow White with the Red Hair fails is in the UTTER LACK OF DWARVES! WHERE ARE THE DWARVES?! I kid, I kid. No, the problems are in the lack of escalation. Conflict starts well with Shirayuki’s sudden move to a new country, a new life, and while we do have some political, physical, and romantic conflicts afterwards, none of them hit a high-tension point. For instance, one romantic conflict arises when Zen has to “interview” a prospective wife for a royal marriage. Shirayuki isn’t bothered by this, and why would she be when nothing comes of it. When you have a cross-class romance, there should be a question of “Will they end up together despite the difference in status?”

The big finale of the series sees Shirayuki kidnapped by pirates. This is disappointing on three counts. First, it’s another kidnapping. Second, the pirate queen is a flat character unworthy of a finale. Third, this conflict doesn’t relate to the core themes of the story or offer any resonance (repeated kidnappings don’t count as resonance). It feels like a side story on the way to the next step of the main story. There is no intensity.

These failings ultimately leave me a little disappointed in how Snow White with the Red Hair turns out. I love the world, find the characters endearing, and had a great time in the first half, but when the “big” romantic, political, and physical conflicts flop like a dead fish on the cutting board, it’s difficult to maintain enthusiasm. I think continuing with the manga is in order – another season is unlikely after four years.

A great thing about the shoujo market is a higher demand for good-looking art compared to the shounen market. If Snow White with the Red Hair was an isekai for the shounen demographic, it wouldn’t have these beautiful colours and attention to palette.

The acting is good and the music is nice, suited to a fantasy shoujo. Not much to say here.

A herbalist in training finds the opportunity of lifetime (and a beau to match) when she catches the eye of a prince. This typical shoujo fantasy has all the right ingredients to satisfy the core, though it could do with turning the drama up a level or two.

Recommendation: For shoujo fans. Snow White with the Red Hair won’t be dramatic enough for general fantasy fans, but those looking for something fun with that light-hearted shoujo romance will enjoy this anime.

5 thoughts on “Snow White with the Red Hair – Anime Review”