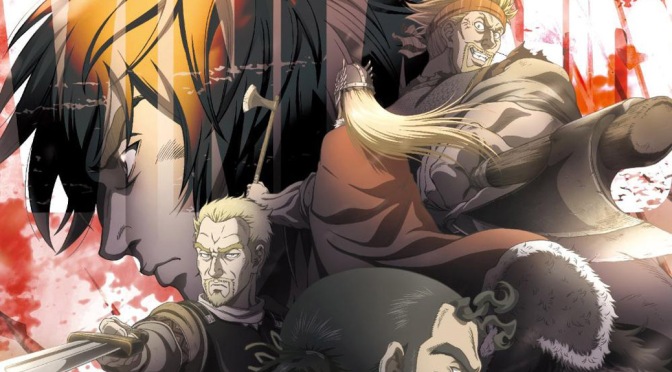 The Heroic Legend of Arslan

I need to go from the start, where an early sign warned of the direction for which this anime headed. Thors, leader of the village and father to Thorfinn, finds a runaway slave on his land. His family tries to rehabilitate the slave, but he soon dies. Worse yet, his owners come to collect and Thors, being the honourable Viking that he is, refuses to return him even as a dead body, offering a few cows instead. He buries the slave.

I understand what the author is going for here – difficult not to – however, the execution shows a lack of thought into the time and place of this story. Thors acts like a modern day person objecting to slavery. This likely stems from the author’s inability to separate his personal feelings from the characters within the story. Some authors think it makes them noble or better people if they write moral characters, regardless of whether it fits the story. This only makes them bad writers. A great writer doesn’t just write the good guys that align with their personal morals, while all villains are everything they see as reprehensible.

This slave incident is minor, in the grand scheme, yet it is an early indicator of problems to come. In 99% of fiction, every core problem has a presence within the first chapter or two (or first episode or two, in the case of anime). It’s why author agents and publishers can reject a novel within a few pages. If characters are shallow in the finale, they will be so in the opening as well. Mistakes echo in every chapter.

The author wants you to know how noble Thors is so that when he gets into an ambush later, executed by the mercenary Askeladd at the behest of the Danish king (Thors deserted his army years ago), you buy into the idea that he would let himself die for the sake of his honour and morals. Thors challenges Askeladd to a duel and wins. It doesn’t take a genius intelligence to foresee that a sellsword driven by gold wouldn’t hold up the terms of the duel. That isn’t the problem. We run into heightened levels of stupidity when Thors, who up until now has outsmarted and outfought the entire mercenary crew singlehanded, refuses to dishonour himself and “cheat”, even though his death leaves his village without a leader, without their strongest (possibly only) fighter, and his family without a father. For honour.

I hate stupid characters. An honourable character isn’t stupid. Someone who doesn’t save themselves, not even for the sake of others, just to preserve their honour is loathsome, however.

And so, Thorfinn makes it his life’s mission to kill Askeladd. Does he turn himself into a killer so he can stab him at the first opportunity? No. Thorfinn joins Askeladd’s crew, fights for him, does his dirty work, all so he can prove himself worthy of an honourable duel to the death.

Mistakes echo in every chapter.

This stupidity compounds further when we talk fighting prowess. After a jump of some years, Thorfinn is a trained warrior, often sent in first like a scout or assassin capable to dispatching a dozen enemy soldiers with ease. There is no doubt of his deadliness. He could kill Askeladd any day now, whether in his sleep or with his back turned. That wouldn’t be honourable though.

I hate stupid characters and Thorfinn is the stupidest in the lot.

Speaking of his deadliness, Vinland Saga has a crippling issue of nonsensical character strength. Looking at this show, you would imagine we were in for a realistic Viking saga. It couldn’t further from. This first rears its nonsensical head when Thors leaps five metres into the air in the battle against Askeladd’s crew.

At first, I thought it was a minor exaggeration of strength, as was often done in folk tales of legendary warriors. However, one warrior fighting for the English can hurl boulders with the strength of a trebuchet using his bare hands. He can also mow down a half dozen soldiers with a single throw of a hand axe. It’s ridiculous.

The issue isn’t the strength (anime is no stranger to super powers). Rather, there is a problem in how it affects tone and breaks the in-story logic of the world. If a warrior were that strong, he could conquer the world. Just give him a cart of boulders and no fort stands a chance. The story avoids this pickle by conveniently forgetting that some characters are super powered when required. Thorfinn does duel Askeladd early on – after we see him massacre a squad – and one would think the kid had never held a weapon with the way he fought. Vinland Saga can’t decide if it wants to be a realistic Viking drama or a battle anime.

Not only is inconsistency a problem, it also makes action less interesting. One battle has Askeladd and co hired by a French nobleman to siege the castle of a rival nobleman. The enemy has a fortified position with view of open ground in front of their castle and a river protecting their rear, guarded up and down stream. The Vikings manage to bypass this defence by hoisting their longships on their shoulders and charging full tilt from the forest into the water. They run as if these boats are as heavy as a paperweight. No one gets tired either. If all trained warriors were this strong, that castle wouldn’t have lasted a day even without Viking help. Let’s not forget to make these same Vikings weak in the next fight so we can kill some off. It would have been better to go more supernatural – incorporate powers bestowed by the Norse gods or something – and work out clever uses than to have this nonsense. Or you go grounded and use some brainpower.

When I talk of realism, I don’t mean everything has to be exactly as it was in real Viking times. I’m talking of getting the tone and feel right. The recently reviewed Dororo is more realistic than this despite having monsters and magic. I praised it for how it truly feels like a nation gripped by famine during samurai times. The way the characters act – the way the monsters and magic affect them and the world all makes sense. Everything fits together.

In Vinland Saga, nothing works. You have these stupid overpowered characters that turn weak when needed. You have a protagonist with no depth beyond his “I’m angry and will kill you” attitude 24/7. Everyone acts like a modern day anime character. The big twist of the story makes Askeladd protagonist (he should have been from the start) and introduces enough allegiance flip-flopping to make you want to hook your brain through your nose.

Is Vinland Saga the worst anime? It is the worst Viking anime, sure. I hated Vinland Saga more and more with each passing episode. I do not recommend this to anyone. If you want Viking content, go watch the History channels Vikings instead.

I could show you many nice still of Vinland Saga. I would however be hiding the insane amount of CG and poor implementation. The number of scenes with characters running (read: sliding) across a CG ground are too many to count. Even the OP has one. This anime almost looks great, except there is something wrong in every shot.

Thorfinn’s performance is laughable. The script is rubbish for a historical Viking show. The one redeeming quality is the great soundtrack.

A Viking boy swears revenge against the mercenary that killed his father. With so many stupid character and inconsistent strengths, the feeble plot is the least of the problems here.