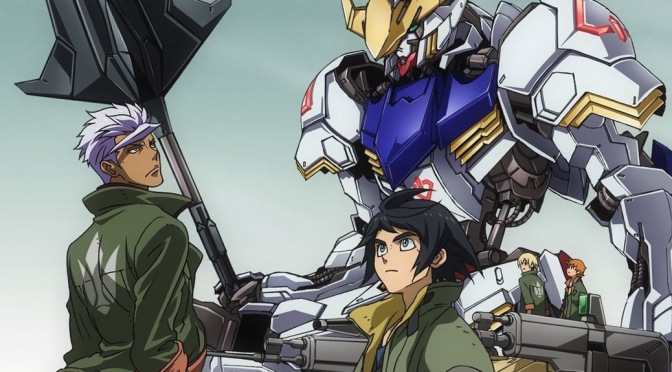 I can only go so long without watching a new Gundam series. It was a while as I waited for this one to release in a complete collection (season 2 took forever). So, was it worth the wait?

Iron-Blooded Orphans centres on a squad of child soldiers, who manage to survive an attack when their military company leaves them to die as fodder. They live on Mars, a desolate planet that relies on the benevolence of Earth. Kudelia Aina Bernstein, daughter of one of Mars’s aristocratic families, leads the plight for independence, but her naiveté comes under fire when she sees the effects of war, particularly on children, first hand. Mikazuki and his comrades of Tekkadan, led by Orga, aren’t messing around when it comes to fighting for their lives.

First, I love the premise. It’s great how Iron-Blooded Orphans goes to the lowest level, to the people at the very bottom of the ladder. Even more so, I love how it doesn’t shy away from the tough circumstances these kids would face and the harsh violence they must commit. Episode 3 illustrates this when Mikazuki executes the leader of their military organisation – and man responsible for leaving them behind – with a bullet to the head the instant he talks back. I did not expect such good sense.

The story hooks you from the start with high stakes and high conflict. I’m sold right away. So what goes wrong?

It isn’t long before you notice something off about the characters, about the way in which they interact with each other. There is a distinct lack of interpersonal conflict. One would imagine that Kudelia’s naiveté could cause much drama amongst these poor downtrodden kids. Why does this spoilt rich girl think she can save us? But nope, there are a few minor comments here and there and we move on. Surely there would be conflict between Mikazuki and Orga. No, Mikazuki never questions his leader. He follows like a dog, a passive protagonist. A love triangle starts between Mikazuki, Kudelia, and this other girl (childhood friend). Come on, there has to be conflict here, right!? At best is a slight shyness from the childhood friend. The most conflict comes from minor characters, whose names you will never remember.

Even with a plethora of external conflicts on these characters, a story also needs internals ones (often aggravated by those external forces). It’s what makes characters human, relatable, and memorable. Regardless of what I think of the rest of Iron-Blooded Orphans, this single factor alone makes me prefer other Gundam series like SEED and Origin.

This problem is no more evident and sorely needed than in the case of the “legitimate businessman” and his harem of women that ally with Tekkadan. Supposedly, he’s married to all of these women whom he claims to love equally. However, there is clearly a favourite, which one would imagine is leading towards several cases of jealousy and thus conflict. Nothing comes of this weird relationship dynamic. His purpose is to create a bridge between Tekkadan and a large yakuza-like corporation they end up working for. Give me drama!

That leads to another problem with this series: too many characters. Way, way too many characters. Tekkadan has twice as many named characters as it should. Then we have businessman and his harem, followed by several enemy organisations, each with their own cast of characters. Gundam series generally have a large cast, but this is on another level. It’s not so much the quantity (Legend of the Galactic Heroes has far more) as it is the quantity at one time. When you have so many characters fighting for screen time, everyone suffers. The phrase “wide as the ocean, deep as a puddle” applies to much of the cast (still no one as bad as Cagali). Cut it in half. Yes, half.

I believe this is the reason we have so little character conflict. Not enough time when a hundred characters need their share in the spotlight. This also explains why everyone and their grandpa has to spell out their motivations for the audience. For instance, an enemy squad captain returns after defeat to challenge Mikazuki to a duel, knowing he stands no chance against the Gundam. Once defeated and given the chance to retreat, he requests to be killed instead. Why? Well, it’s obvious, but he has to give a dramatic monologue for minutes to make sure we understand. Iron-Blooded Orphans deals in heavy themes not for small children, so why talk down to the audience like children in regards to characters? People will get it. Every character has this moment.

Also do something about the creepy marriage between one of the antagonists and a child. It isn’t talked about enough by other characters. I’m not sure what they were going for here. If they want to establish that this isn’t unusual, they need to make a point of it. Just creepy.

To top it all off, I’m not a fan of the designs. I know this is personal taste, but the hairstyles are just too silly for a gritty war drama. Does anyone else think the protagonist looks like Sonic the Hedgehog? On the other hand, we have the mechs. There are awesome designs here. The main Gundam, Barbatos, a relic of an ancient war is one of my all-time favourite designs. I liked it before having even seen the series. 10 outta 10! Gundam of the year!

So far in this review, I have been quite negative – it comes from a place of love – so why did I enjoy this in the end? It is equal parts being a Gundam fan in general, the action, and the story.

The decision to have much of the action be up close and personal, mechs smashing into each other, tearing armour plate by plate instead of all the usual high tech beam weapons was an ideal match to the story’s tone. Some of the deaths, people crushed inside their cockpits, are brutal. I cannot emphasise enough how little Iron-Blooded Orphans holds back on the subject of child soldiers and war. It also gains extra points for featuring one of the only instances where a hero shoots an enemy in the head during their speech on “honour”.

Then we have the story, which stays engaging (apart from a lull in season 2) in the face of an average cast of characters. The meld of war, politics, shifting alliances, and scrappy fights had me until the end. And what an end it is. I should never have doubted the team to deliver the right ending, but this surprised me. The perfect end to this type of story.

Do I recommend Iron-Blooded Orphans? Yes, but not to Gundam newbies. This one is overloaded with specialist terms and names you’ve never heard of. It can get difficult to track who’s who when referred to by name alone. Or were they talking about an organisation? Go with Mobile Suit Gundam: The Origin if you want to start with the main line series or Gundam SEED / Gundam 00 if you prefer standalone stories.

Though I’m not a fan of the character designs, there is no denying Iron-Blooded Orphans looks great. Best of all, repeat animations aren’t an issue and the action flows smoothly. There is a visceral quality to the way Barbatos carves up enemies.

I like the soundtrack, but I wish it had a little more grunge to match to the down and dirty lives of these kids. The acting is better than the script, which could do with a simple 10% trim that over explains characters.

A squad of child soldiers find themselves holding destiny in their hands before they fight for a better future. A great story with mediocre characters comes to an excellent conclusion.

Recommendation: Watch it (if it isn’t your first Gundam series). Iron-Blooded Orphans is a solid series despite its flaws. However, I don’t recommend this for first-timers to the Mobile Suit Gundam franchise.