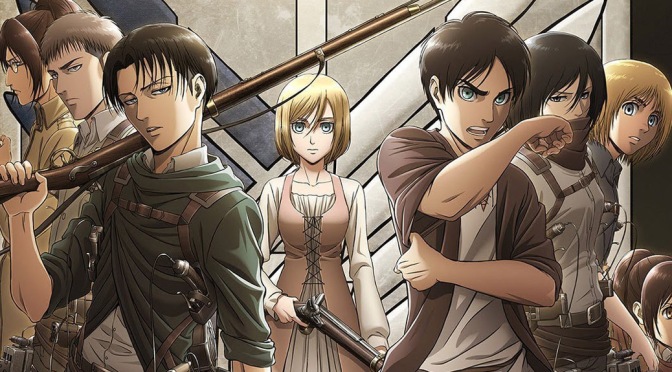 Here we go, back for another season of Attack on Titan. After the poor showing of Attack on Titan: Season 2, I was done with this series, but a reader requested I return for the third season, as it had improved – or so the claim went. I go into this willing to give it a chance.

Attack on Titan: Season 3 starts well with beautiful animation and a focus on human versus human conflict. The titans became an uninteresting part of the series since it turned out every character and their mum is secretly a titan. Eren as a titan is still the greatest mistake this series made. You don’t think the author would do the same again, would he? Would he? It has also become evident which characters have plot armour, removing much of the tension that Attack on Titan executed well in the first season. These problems persist in season 3.

However, this season does improve in several ways. As I mentioned, the human conflict is good between the scouts – largely composed of the lower class – and the ruling class at the heart of civilisation. There should have been more such conflicts from the beginning of the anime. The most captivating element in any monster story is how characters react to each other, not the monster. Attack on Titan in general lacks complexity. Look no further than the one note cast of characters, especially Mikasa. I thought she would find relevance by now.

Ironically, the best action comes not against the titans but between humans, all of it in the first half of the season. The animation is great, the settings are creative and lend themselves well to the web swinging, and it’s different from earlier seasons. As for the titan action, it’s okay overall. The fight with the crawler titan has good atmosphere. A massive battle against a few special titans eats up most of the latter half of the season, which does drag from lack of story and two glaring flaws. First is the Bigfoot Titan and his baseball puns while pelting boulders. Just why? Imagine if Gollum started going on about fidget spinners in The Lord of the Rings. The second is the decision to have the Colossal Titan made entirely in CG – it never looks good (the crawler has the advantage of being in the dark).

In fact, we see a significant drop in visual quality during the second half. Static pans with only mouth movements become more common, highflying action is rare (characters hanging from walls or on roofs is popular), and we have less key frames throughout. The first half looks great, much better than season 2, only for the second half to slash the budget. One has to wonder either if a different team did the work or if they realised that fans would watch regardless. Attack on Titan is popular enough to draw a crowd on a shoestring production.

The “Part 1” and “Part 2” structure of this season brings another problem to mind: the disconnect in story between seasons. Think back to seasons 1 and 2 and how little most of their events matter to season 3. Even with this season, the two halves aren’t all that connected. There is no sense of planning for the overarching story, as though the author thought of it one season at a time. The internal conflict within the human city of Part 1? Irrelevant to Part 2. What happened in season 2 again? I’d say 10% matters from season to season. This simultaneously makes each season feel like filler and relevant content.

Every good story employs resonance to build and build the narrative, incorporating past elements with the new to reinforce themes and events. Attack on Titan lacks resonance. When an earlier setup does receive an answer, I imagine the editor had to remind the author the night before.

Lastly, we come to the details. In my season 2 review, I talked of how the author hadn’t grasped the size of the human territory within the walls and the travel time required. It gets worse. We have characters travelling vast distances in a fraction of the time it should take. People come to the rescue at the last second (see plot armour earlier) despite being on the other side of the battlefield a minute ago. You can get away with this to some extent, but repeat offences wear thin. On a scale of one to Game of Thrones season 7, Attack on Titan is an eight for poor travel logistics.

Then we have simple stupidity. The ruling class wants to disband the scouts, the one group able to slay titans. How moronic are they? While evading the police, the scouts have the idea of hiding Eren in a crowd of 100 scouts by pulling their hoods up while flying around. Hoods wouldn’t stay up – bet you the writer has never worn one. Not a big deal, but it’s one of many instance where no thought went into the idea. No one instance is atrocious, yet they add up over time. Another that comes to mind is the torture scene. The mad scientist woman is the interrogator, but because she is comedic relief, the scene is laughable rather than frightening.

Contrary to my plethora of criticisms, I am more positive than negative towards Attack on Titan: Season 3, mostly because of the first half and its visual plus audio quality (great new OPs). It’s easy for the action to sweep you up.

Still, season 3 has not increased the likelihood that I will watch the conclusion. There are no mysteries left for me to care about. Season 3 revealed the origins of the titans to lacklustre results (would have been better with no explanation and no attention drawn to the idea of a backstory whatsoever). The studio has announced the fourth and final season is to release in 2020.

Recommendation: For Attack on Titan fans only. While an improvement over season 2, Attack on Titan: Season 3 isn’t worth it for those that already quit.