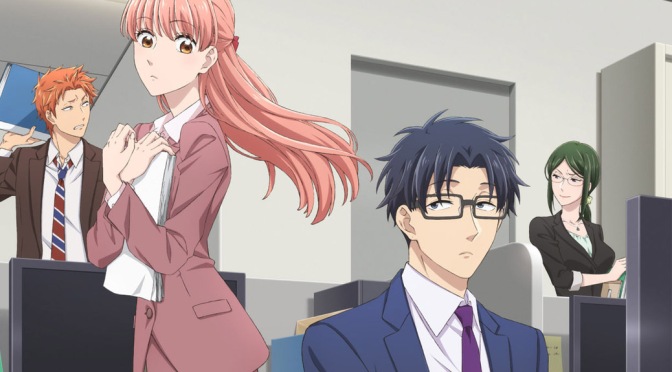 Recovery of an MMO Junky

It is Narumi’s first day at her new job. She has but one mission: no one can find out that she is an otaku, and not just any otaku, but the worst kind – a filthy fujoshi. Absolutely, under no circumstances, should a guy hear of her dark secret, for even if he is accepting of her perverted ways, then that must mean he’s an otaku too. And who would want to date an otaku!? This is a chance at a new life. No one will ever realise they are working right next to a yaoi loving degenerate. No one will ever know of the smut she hides on her hard drive. NO ONE WILL EVER KNOW THAT SHE SHIPS GUYS TOGETHER AFTER THEY SAY ONE WORD TO EACH OTHER! Oh crap, her boss found out!

Wotakoi: Love is Hard for Otaku is an adult rom-com in an office setting. It is packed with nerd humour, pop culture references (the deep cuts), sweet romance, and fun all around. I love it.

Narumi is such a lovable protagonist. The scene when Hana, her boss, uncovers her secret – turns out she is a mega nerd as well, cosplaying regularly as a bishounen (feminine handsome man) Narumi is a fan of – makes you fall in love with her. Turns out, Hana is also a fan of Narumi’s yaoi fan fiction written under a pen name.

Narumi is rather goofy and the show plays most jokes at her expense (they have to flash a “please don’t run for departing trains” sign every time she’s late, which is often), but she isn’t stupid. It would have been so easy to make her a moron to have otaku go, “Gosh, isn’t she adorable. I would love to have a stupid girlfriend,” something you often see in moe anime.

Then you have her dynamic with the guys at work, who are also into nerd stuff. You have Tarou – Hana’s future boyfriend – and Hirotaka, who has a preference for games and a disdain for yaoi (in a humorous way). He is Narumi’s love interest. These characters – not just the main couple – make for a great group. You can easily see them as friends in real life, relatable to anyone who likes hanging out playing couch co-op games such as Mario Kart (called “Mari Ka” in Japanese, for short, as I learned), adventuring together in MMOs or just chatting over a meal.

Harumi and Hirotaka are a sweet couple. The arguments they have over trying to get the other person into the things they like is endearing. However, I do wish there was more to this romance. It’s certainly a believable one (often, the problem with anime romance is the lack of foundation in the romance to begin with), yet doesn’t go into enough depth for how they work as a couple in private. It has the fun side of the romance without enough of the drama side. Doesn’t have to be heavy conflict – just give me something so I can say, “You know what, they’re going to make it.”

Now, the fun side is a success. When they go on a date to the theme park, they set a “no nerding” rule with a 500-yen penalty to the piggy bank for breaking it. She can’t resist making the perfect JoJo reference while he can’t miss the chance to catch a rare Blissey in Pokémon Go (fun fact: Blissey in Japanese is called “Happiness” – the English word happiness).

The nerd humour is on point. Hirotaka is a pro at Monster Hunter, even playing it at work. They play together on a hunt for a rare ruby she wants from a monster, but when she gets none and he gets two, not needing any himself, she says, “The Desire Sensor must’ve activated!” I love the inclusion of this joke. This author, she knows the gamer’s mentality. It feels authentic and not tacked on because market research says that anime for adult nerds must have adult nerd references. How often have you seen a US TV show try to make a gaming reference, for whatever is the big thing at the time, and come across as painful to watch? The Big Bang Theory still makes me cringe in memory of that MMO episode.

I even learnt a new term from this anime: the reverse cover scam. “I see the cover [of a manga] and buy it for the sex scenes, but the story turns out to be good!” That is perfect. I have to use that phrase in real life at some point.

Wotakoi: Love is Hard for Otaku gets my heartiest recommendation. It is a refreshing change from the sea of high school rom-coms and I hope to see more of this kind in future.

It’s not a flex show, but the art is good. The colours and character designs pop!

The music matches the fun tone – super catchy OP – and the acting is strong overall. Narumi may sound too young for an “office lady”, but it matches her young-at-heart fangirl personality.

An omega nerdy office lady has her cover blown at work, only to find out her colleagues are nerds themselves. This light-hearted rom-com is a fun 11 episodes that I wish leant more into the romance.

Recommendation: For adult nerds. Wotakoi is an easy anime to watch, though with its slant towards adult life and adult humour, you need to be part of the older crowd to find it fully relatable. Still, don’t let that stop you.

9 thoughts on “Wotakoi: Love is Hard for Otaku– Anime Review”