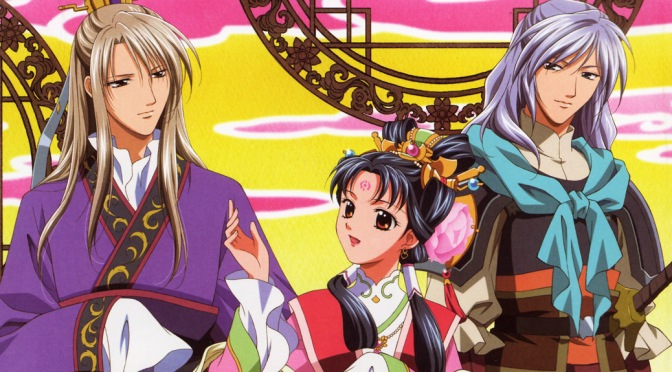 Similar: Yona of the Dawn

Moribito – Guardian of the Spirit

With her family estate declining and her future uncertain, the young librarian and teacher Shuurei accepts the court’s offer to become the lazy emperor’s concubine and instructor in exchange for 500 gold pieces. She has no reason to turn down the offer, as the new emperor prefers the company of men (or so he likes everyone to believe). Plus, this could be the opportunity to fulfil her dream of becoming a member of the court, where the fate of the people is decided. Her innocence and focus teeter on the brink however, when her job puts her in the path of several handsome men, never mind the emperor’s stupidity.

The first impressions of The Story of Saiunkoku gave me hope of seeing another Twelve Kingdoms (still have my fingers crossed for a conclusion) with its bishounen artwork set to a vast kingdom and mystical backstory. I expected far too much. It is partially my fault, likely generated out of desperation to see more of The Twelve Kingdoms sort. So, I adjusted my expectations and saw Saiunkoku for what it is – a shoujo historical fantasy romance that pays no attention to historical realism in exchange for dreamboat men.

First off, I believe this anime conveniently ignores what a concubine actually is (we call them something very different today). It wouldn’t do to have the protagonist called a whore every scene in a show for young girls, now would it?

Changing some historical nuance isn’t a deal breaker for a show such as this, full of fantasy and no “true story” adaptation. The real issue is the complete lack of feeling that this takes place in a period gone by. This is a very “anime” anime for teenage girls with its modern humour and contemporary mannerisms. I wouldn’t call this a historical piece. I liken Saiunkoku to characters dressing up for a period piece rather and actual period piece. Whether the author wasn’t skilled enough to write a period piece or the team thought it would be too difficult for the target audience to understand, Saiunkoku isn’t a period romance.

Barring that, it does have strengths. For one, the aesthetic is lovely, suits the tone of the series, and no doubt makes the bishounen even more appealing to the audience. While this is a reverse harem, matters never descend into garbage harem territory. It also has many elements, from the intricacies of government to wider cultures and a large cast of character without dragging down proceedings. The story moves at a good pace and never feels tired. The top-level plot progress slows at times, though this is in exchange for more exploration of a subplot. I cannot impress upon you enough how surprised I am by this. Too often, such a volume of elements results in a bloated mess where everything competes for attention, nothing sticks with the audience, and you just want to drop the series.

We have plenty of politics within and without as Shuurei navigates the imperial court and all its conniving players. She faces a greater challenge than others do, being a woman in the territory of men while falling for some of them. The drama never gets heavy, yet it has enough to deliver the audience to the conclusion. It maintains the mask of shoujo romance, yet doesn’t do so at the total expense of depth.

The Story of Saiunkoku is quite good for young girls – there is a lot here for the right audience – but anyone desiring an experience that takes you back in time with a touch of fantasy will find this piece too modern.

Most of the effort went into the character designs and aesthetics, which look nice, instead of animation, which needs work.

Music is the best part of The Story of Saiunkoku. I like the OP and classical Asian instrumental soundtrack. As for acting, the Japanese fine. I would avoid the dub, as a couple of characters are jarring. One kid has so much nasal on top of being a kid everyone would punch on first meeting.

A girl agrees to become concubine to the new emperor in exchange for a hefty reward, but the simple proposition complicates itself when feelings get involved. While not a period piece whatsoever, The Story of Saiunkoku is a good shoujo romance.

Recommendation: For shoujo fans. The Story of Saiunkoku is shoujo within and without – unfortunately at the expense of historical realism. It knows its core demographic.

One thought on “The Story of Saiunkoku – Anime Review”