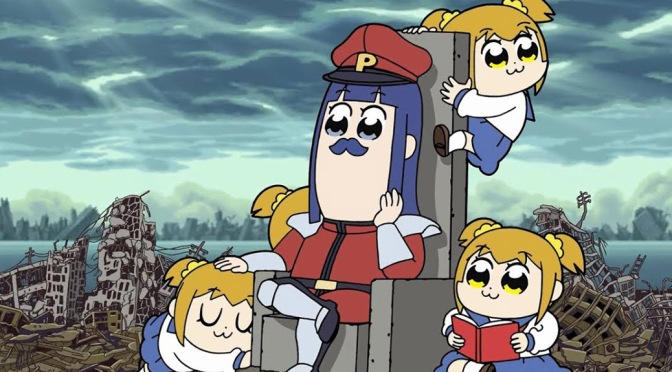 Do you like memes? No, do you love memes? Boy, do I have the anime for you!

Pop Team Epic is trolling made manifest in anime form. When I started the first episode and it played an ordinary idol anime opening, I thought I had put on the wrong series. No, it was just messing with me. When the episode ended with half the runtime remaining, only to restart the episode with the girls voiced by the opposite gender, I…had no words. This is a hard one to describe.

Put simply, Pop Team Epic is a collection of skits lasting anywhere between 10 seconds to a minute long. It pulls from anything and everything. One second, Berserk’s evil egg mutates into the face of the blond girl, the next second we’re waking up in the cart at the start of Skyrim, and then we find ourselves in real life. It is a thousand memes put through a vulgar blender and sprayed onto walls, floor, and ceiling to see what sticks. I take it the studio allowed its artists and voice actors to do whatever they wanted.

My favourite skits are when, rather than bothering to animate a scene, two people flip through storyboard pages or the time we look into the voice-recording studio, where the actors lose their minds over the insanity of the script – full mental breakdowns! The random cuts to a French animator from the studio talking in a calm voice, explain something about the animation, before it cuts to the two girls in France flipping everyone off also got a chuckle.

There’s not much to say about Pop Team Epic. Is it good? Eh… It’s hit and miss from skit to skit – since they don’t last long, the bad ones don’t hang around. I think the biggest problem with Pop Team Epic is watching it in episodic format. This material works best taken in one skit at a time, shared to you online by a friend or stranger like a meme. If someone were to send you a video of the same meme done it different ways over a 20-minute video, you’d stop laughing a minute in. Watching Pop Team Epic as an anime series is just that. And like most memes, this will be dated in a year’s time.

My recommendation, should Pop Team Epic seem of interest to you, is to watch random clips online. It doesn’t really work when put together as an “episode”, too random in its structure and rarely giving time to appreciate the joke. Here, watch one:

A random collection of visual techniques and styles – sometime with no art whatsoever – works as often as it fails. Or is the other way around? I swear one scene was made in Microsoft Paint.

I’ll give it to the actors – they commit. Watch it in Japanese for extra lunacy.

Recommendation: For meme connoisseurs only. If you must watch Pop Team Epic, do it in random doses like a mad doctor throwing prescriptions at passersby.