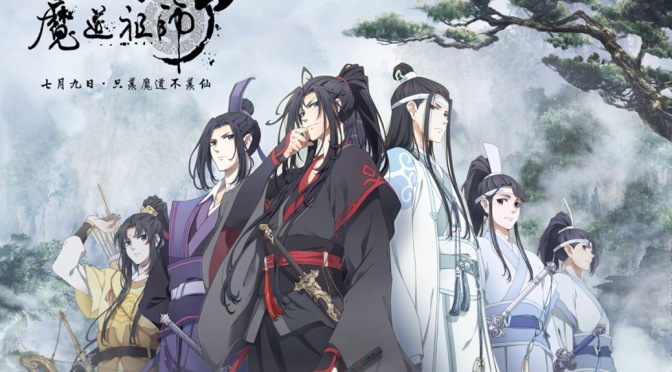 Now this is more like it! Grandmaster of Demonic Cultivation gives a far better first impression to donghua (Chinese anime) than The King’s Avatar did. It still has that unrefined edge from this new market, but combining Avatar: The Last Airbender and Twelve Kingdoms with a touch of Game of Thrones still makes this a great series well worth the time of fantasy fans.

The story is set in a province of fantasy China where five clans of cultivators of magic live an uneasy peace. Of these cultivators, most peculiar is Wei Wuxian. He is the reincarnation of the legendary cultivator of demons and necromancy, one feared by all. Contrary to his infamous reputation however, Wuxian is a likeable goof known for his cheek and mischief at the monastery colloquially known as the “Wall of Rules” (for its list of 4000 rules, of course), when he should be studying with the other cultivators. Opposite him is Lan Wangji, who takes life too seriously as the perfect student that never smiles. He’s responsible for turning Wuxian into the monastery instructors more than once. Life becomes more than fun and games for Wuxian and his friends when one clan closes its iron grip around the others.

The comparison series I used above are perfect descriptors for Demonic Cultivation. We have the might of one clan against everyone else similar to Avatar. Wuxian has Aang’s playfulness amidst all the violence. The etiquette and Chinese mythology influences seen in Twelve Kingdoms have ingrained themselves within the fibres of society. The brutality of war and politics like in Game of Thrones plays its role too. And I am pleased to say this series succeeds in all these elements.

The characters, the action, the environments – god, the environments! – reassure you this is quality fantasy. I love how Wuxian controls the dead by playing unnerving music on a flute (recalls that villain from Naruto who used to control her ogres). It tells much about his character. Even the product placement works.

If I may go on a tangent, the sponsorship ads are great. How would you fit modern products in an ancient fantasy series, you ask? Well, Demonic Cultivation achieves it by taking a scene from the episode (saves on animation budget) and makes it about the product instead during the ad break. For example, the episode has a scene with a tiff between Wuxian and Wangji over something story related, while the ad takes the same tiff and makes it about the fact that Wangji is such a stick in the mud because he hasn’t eaten a Cornetto yet (“You’re not yourself when you’re hungry” type ad). They’re amusing. More like skits instead of ads.

Anyway, back to the show.

Grandmaster of Demonic Cultivation is full high fantasy. The most common reason I hear for people being put off high fantasy is all the specialist terms and names you have to learn (Hobbit, Rivendell, Mordor, Nazgul, Dunedain, Numenoreans, Eldar, Vanyar, etc. for The Lord of the Rings). It’s especially important to have some sense of who’s who and what’s what when reading high fantasy, as the story isn’t fed to you like when watching a film. In the case of Demonic Cultivation, the barrier to most people reading this review comes from it being foreign fantasy, where the conventions aren’t the same as what we are used to. Once you grasp one Western high fantasy series, it’s much easier to move onto the next. But going to another language, another culture, another history, it’s almost like starting fresh.

For me, the greatest challenge was those damn names. The subtitlers – Sigmar bless them – did their best to note cultural context and meanings for name and titles, but I still had characters and relationships confused. You hear the same surname, so you think the characters are related, right? No, they aren’t. Other times have a character named one thing, only for it to be something else in another scene. Turns out, pre-20th century China had a convention called “courtesy names”, where people would receive another name upon reaching adulthood. Couple this with the fact that these names – Wei Wuxian, Wei Ying, Lan Xichen, Nie Huaisang, Yu Ziyuan, to name a few – are nothing like Western or the usual anime names and it becomes difficult to remember any names at all. (I had to look up Lan Wangji’s full name for the blurb above and he’s second billing!)

Now I’m sure this isn’t an issue whatsoever to Chinese locals, just as Western or Japanese high fantasy is second nature to me, yet for the uninitiated, it will take time. Stick to it because the payoff is well worth it. Even if you can just remember how characters connect and who’s superior to whom, it will work out in the end. (Little easier said than done though, with characters from the same clan looking like each other in the same uniform and same hairstyles. They love that long hair.)

While this adherence to traditional naming schemes is a positive even if it increases the barrier for entry, since it enriches the world and its lore (in fact, I wish they had applied the same complexity to the magic by laying out rules), the frequent timeskips are a definite negative.

Timeskips bookend each story arc, often leaping over what seem like important events. The most notable is when the villain clan makes their move. One episode ends, everything seemingly fine, before the next opens to the clan in near total control of the others. How the hell did that happen? Did anyone say no or did everyone surrender unconditionally? How did we get here? It isn’t implausible that this conclusion would occur, but it would be nice to see the events that led there.

These timeskips remind me of watching a TV series before the advent of DVR and video on demand/downloading. You would watch an episode, then miss a few weeks because scheduling conflicts, and when you finally catch another episode, you wonder how it got here from where it was the last time you watched. “Weren’t those two madly in love? Why are they trying to kill each other? Wait, isn’t that guy dead?”

If you go in blind, the point of the story can be confusing because it takes a few episodes to get into the real plot. I thought at first the story was about other cultivators hunting Wuxian for his use of necromancy. Turns out, they just hate him because he’s a troublemaker at school. Early episodes make up the “school years” arc.

Demonic Cultivation also doesn’t wow the audience (outside of its amazing backgrounds) these few episodes. Once the story gets going however, it grabs you and doesn’t let go until it ends on a fantastic final act. That finale has left me craving more. (Season 2 in July!)

If you haven’t tried any donghua yet, let Grandmaster of Demonic Cultivation be your first. It’s a little rough and a little difficult for those foreign to Chinese fantasy like me, but don’t let that stop you enjoying this new perspective on anime.

Picturesque backgrounds, varied environments, fluid animation, and impactful spell effects should earn an art rating of the highest tier. Unfortunately, 5% of this art is early 2000s CG monsters and buildings, and it looks bad. The CG in some important scenes looks so bad that you can’t help but wonder why they didn’t take an extra two weeks to do them normally. Some CG shots don’t even need to be there. Just cut them. A still painting to establish setting would have sufficed – the environment artists are certainly talented enough to make it beautiful. Also, supporting character faces and hairstyles could use more variety.

Unlike The King’s Avatar, the audio is spatial and uncompressed (characters on the right sound from the right), which is a huge improvement. The acting has a little ways to go yet. Such lovely music though! I love classical Chinese music with traditional instruments and I could listen that opening song forever.

A demonic necromancer reincarnated in the body of a trickster gets up to no good against the backdrop of a brewing war between clans of magic. Great characters in a story of complex interpersonal and political conflicts makes for a great series.

Recommendation: Watch it. If there is the right donghua to begin with, Grandmaster of Demonic Cultivation is it.

Awards: (hover over each award to see descriptions; click award for more recipients