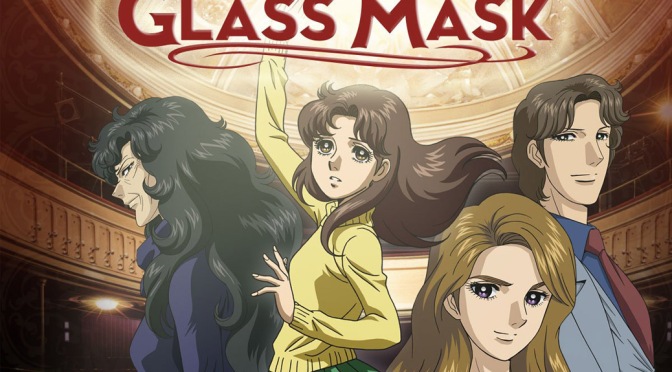 Searching for the Full Moon

How is it that one can make an anime about acting only to end up with a Mary Sue that can’t act?

Glass Mask is a frustrating anime. It’s something different and about acting, an art form I love, so I wanted it to succeed in the same way that Nodame Cantabile did with music. I kept giving it chances to improve, but it did nothing other than disappoint me further at each stage.

We follow Maya Kitajima, a 13-year old girl with big dreams of stardom on stage and screen as she toils away as a ramen delivery worker. She loves to perform for anyone that will watch. While playing with kids in the park, a crone-like lady comes up and proclaims that Maya is the star she’s been looking for all these years! Maya rightfully screams and runs.

This is the first red flag. Never believe anyone who tells you, “I knew it from the first that they would be the best.” When a teacher finds a future star, they don’t see the greatest to have ever existed. They don’t witness perfect pitch or hear the perfect note on the piano – many can do that in a vacuum. They see something more, a quality that could take them further, whether it is determination, focus, a different take on the art, or unexpected creativity. (And remember, more stars fail than succeed.) In Glass Mask, Tsukikage instantly sees the greatest actress that will live in a 13-year-old girl with no training and no experience. Sigh…

We can forgive that as the typical exaggeration of anime. It’s common for the protagonist to have some amazing quality right away, so it’s not a death sentence.

Acting is an obsession to Maya. While out on deliveries, she often finds herself distracted by the local theatre or cinema with the latest dramas from her favourite stars. We see an early example of how far her obsession goes when she makes a bet with the bratty daughter of the ramen shop. If Maya can complete all deliveries on New Year’s Eve, the busiest night of the year, on time and by herself, the other girl will give her tickets to the latest hit play starring her favourite actress.

This takes place in Yokohama (well recreated here, by the way, with the warehouses by the wharf, the downtown amusement park, and beautiful skyline). The restaurant is in the city’s Chinatown and I recognise several of her delivery destinations. I have toured Yokohama (love it!) and let me assure you that no one would be able to cover the ground she does in so little time, even if they had bike. Oh yeah, did I mention she does this on foot? In the middle of a winter night? While carrying two cabinets with several of ramen? Which, as a minor aside, means she has to return to the restaurant after every few customers. Did I forget to mention that? Before one would even consider the feasibility of her task, there is no way the owner would hinge her restaurant’s reputation on a child’s bet.

Of course, she succeeds.

Okay, perhaps we can forgive this as well. It’s the equivalent to the shounen protagonist beating the “unbeatable” trial set by a teacher to prove that they are worthy of becoming a pupil. What follows, however, is unforgivable.

Through a series of events too long to detail without being here all night, Maya becomes apprentice to the crazy crone from earlier, who turns out to be former diva and legendary actress Chigusa Tsukikage. A director wants to remake her greatest film (imagine Casablanca) with the current popular actress (Maya’s favourite). Tsukikage doesn’t believe she can live up to the role and decrees that there won’t be a remake until she trains Maya. This performance is Glass Mask’s end goal.

So, Maya moves into Tsukikage’s mansion with several other girls to practice acting day and night. And it just gets stupid from here.

First, Maya has the ability to memorise an entire play – everyone’s lines – in a single viewing and recreate it without practice. She also instantly knows how to convey any act on her first try. Glass Mask demonstrates this in one of the most laughably bad scenes in anime.

On their first night at the mansion, they have to mime eating their favourite dish after Tsukikage tricks them. Everyone is blown away – tornado picking up Dorothy’s house levels of blown away – at her imitation of slurping ramen. The way everyone reacts to everything she does is so over the top that it’s pathetic. This is a shounen for girls and her superpower is acting.

Another moronic scene has students pretending to get a bird down from atop a cupboard and back into its cage. Everyone does this normally, but for Maya that isn’t good enough. She acts as though she’s too short to reach the cupboard and this blows everyone’s minds! “Oh my god, we are so stupid! How did we not realise that a cupboard top is high up? Never mind that the exercise was about handling the bird – we should kill ourselves with shame!” They don’t actually say that, but their reactions do.

See, Maya’s defining personality trait is her need to be different, to be special from everyone else. One of her early gigs is the village idiot in a theatre comedy. Her role is comedic relief with the explicit purpose of making the audience laugh. That’s what they pay her for. The ignorant director, in his decades of experience, forgot that comedy is beneath the great Maya. She changes the script mid-act and takes over the play to give her character a tragic backstory, turning the play into a drama. Of course, the audience is in tears as they give a standing ovation.

You know what would happen to her in reality? Fired on the spot and no one wants to work with her again. Only the most gullible and acting ignorant person would fall for Glass Mask’s version of the art.

The stupid doesn’t stop there. Wait until she starts the method acting. Every one of her roles once her career kicks off is Oscar bait.

Her main rival is Ayumi, daughter of the current popular actress mentioned earlier. They compete for a variety of roles of equal pretension. One audition is to play a young Helen Keller, a woman famous for learning to read and speak despite being blind and deaf. Two of the audition judges are Ayumi’s mother and her mother’s manager. No bias, they swear.

After winning each role, Glass Mask takes a few episodes for Maya to go method while implying that if you don’t go method, you are a bad actor. In one role, she plays a bedridden girl; so of course, she goes out in the rain to get sick for the performance. Has Maya ever considered, you know, acting? Your Lie in April is far superior at dramatising the struggle to become a better artist.

In a move of divine irony, none of Maya’s performances – and her voice actress’s by extension – are any good. Not one performance manages to convince me that I am seeing a different character on screen. It’s always the narcissistic Maya. The funniest role has to be that of Wolf Girl, where she has to become a girl raised by wolves. Embarrassing.

I get the impression that the author of Glass Mask knows nothing about acting. Does the writer not know that acting is a collaborative art, where reacting to others in the scene is just as important as acting by yourself? Yet, this show acts as though the job of a performer is to slay your scene partner with sick line reads. This ain’t a rap battle. (Yes, they do have “act offs”. I am not kidding.)

Furthermore, all adults around Maya that have been in the business for years act like amateurs just to make her look better. “What is this…‘a-ku-ting’ you want me to do?” they say, drool slipping from the corner of the mouth.

Above all this, what I hate most about Maya is her false modesty. She wins an Oscar-like award as a teenager, receives a standing ovation after every performance and praise from all, but at the end, she says she isn’t that good. (I mean yes, her voice actress isn’t good, but that’s not what she meant.) What an insufferable character.

The ideas, if you list them out – girl obsessed with acting to the point of insanity, has-been starlet driven to train a protégé, showing the girl has natural skills at an impromptu audition, dedicating one’s life to the art – are all fine on paper. With the over the top execution of Glass Mask though, it takes them beyond the point of believability into laughable territory.

The art is more realistic (ish) than the norm for a shoujo anime. Animations need fluidity.

Most performances are fine. However, having an actress with no range play a girl said to have the superhuman ability to become any character is a massive failure. The music is dull – OP, ED, BGM – all of it.

A young girl with a chameleon acting talent goes under the wing of a once great actress obsessed with raising a successor. On paper, everything sounds great. In execution, the journey is painful to endure alongside an insufferable protagonist and lessons that no actor should follow.

Recommendation: Avoid it. I don’t want people to watch Glass Mask, especially kids, and to think this is a representation of great acting. I almost gave this a Low rating, but I truly hate the lead and everything she represents.