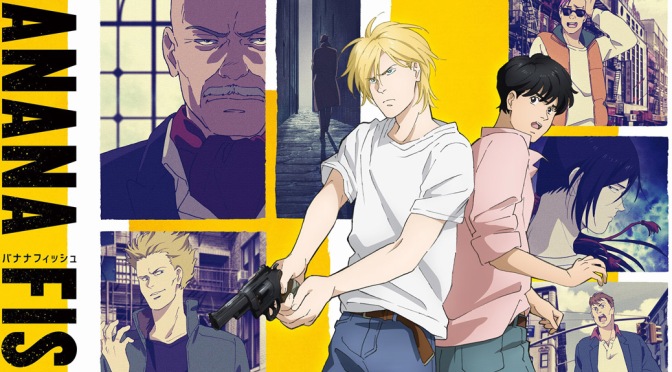 Banana Fish is an adaptation of a manga by the same name that ended 24 years ago. Once a manga reaches a certain age, it’s often deemed outdated and financially unviable. Should one receive an anime adaptation, even then it could become “old news” and have no second season in favour of a gamble at the next big hit. So it’s a pleasant surprise to see something as old as Banana Fish on the slate. And when a studio does go out of its way for an old licence, they will put the full production effort behind it, as is the case here.

The story centres on young Ash Lynx, a handsome boy adopted by New York City Mafia Don Dino Golzine, who declares that Ash should inherit his empire. The boy is ruthless, resourceful, and charismatic – all the qualities he desires in an heir (and it helps that Ash is just his type). Unfortunately for the Don, the boy is also rebellious and despises him like the devil. Ash becomes hell-bent on destroying his father and abuser, especially once suspicion arises of his involvement in the death of Ash’s brother and a mind control drug called Banana Fish. This dangerous game becomes more personal when he meets Japanese photographer Eiji, with whom he makes fast friends. Eiji has just entered a world of abuse, drugs, and death.

Ash is an interesting character and the strongest element of the story. He is a mix of violence and pain as he hates just about everything in his life, yet has these moments of intense vulnerability like a lost child that has no idea of the world. As a child, people sexually abused him, particularly in the mafia including Dino, which taught him that his most valuable asset to these monsters is his body. He’s so damaged by this, one isn’t sure if he’s actually gay or if he’s willing to use his asset to gain the upper hand. It’s messed up, but it makes for an interesting protagonist.

Banana Fish opens on a song to hype you up for the action and ends on a ballad of sadness to remind you of Ash’s pain. That is the heart of Banana Fish.

Eiji is the opposite: sweet, innocent, doesn’t know how to handle gun, and hasn’t even kissed someone. He’s the only good in Ash’s life. Nothing was free in Ash’s world, until he made a friend.

The rest of the cast is a motley crew of gangsters, street urchins, and forgotten soldiers. They work fine in their roles. Where Banana Fish fails its characters is with the villains. Not one of them is interesting or has any depth. Dino is just a creep obsessed with getting Ash to come back as his heir. His plan to accomplish this? What plan? The Chinese guy with long hair, said to be a master manipulator, only succeeds through plot convenience and his ultimate desire for death is just nonsensical. He’s more whiny cartoon child than evil genius. The rest are run-of-the-mill thugs and henchmen, as normal.

The focus on action over character does lessen the impact of weak villains, since this isn’t a battle of ideologies or wits. However, the action-dominated story does dampen the initial setup with Ash’s background and his friendship with Eiji. It doesn’t stop long enough for us to absorb these characters.

To compound problems further (it’s chain of problems, at this point, one leading into the next), the action isn’t smart like Code Geass or stylised like John Wick or Mad Max: Fury Road, so I don’t feel the action alone can carry the series to greatness. People take life-threatening injuries only to stand up a minute later as if they won’t die of blood loss any moment now. Also, Ash is supposed to have an IQ of 180, yet his plans are far from genius. One hit on Dino involves standing atop a truck to take the shot while speeding past. Really, that’s your plan? Nothing in Banana Fish lends credence to his genius label. If they simply hadn’t mentioned it in that one episode, it would have been irrelevant. He’s of average intelligence with high charisma, which is perfectly fine.

My other problem with Ash is the overuse of certain tropes. For instance, I lost count the number of times he wiled his way out of captivity by seducing his captor/guard. It’s awfully convenient that every single one of them is gay and falls for the oldest trick in the book. It made sense the first time when his captor was a past abuser that still craved him. After that is pushing it. Even the humour, which is often jarringly out of place, uses this trope in a light-hearted manner.

Banana Fish has a much stronger first half than second. The first has all the tension, tough choices, harsh losses, and less to do with weak villains. It’s still a decent anime in the second half, though you have to love it for the action more than anything else. And if you make it to the end, the final scene is the best in the series.

One of the better-looking series of the year, Banana Fish has a colourful style with plenty of detail, nice animation, and consistent quality. Distant characters lack detail though.

From OP to ED, main character to supporting, all the audio is great.

An heir to a criminal empire rebels against the predator that raised him and finds friendship in an unexpected place. Banana Fish has a strong first half, fluctuates up and down for the rest of the way, but ends on a great moment.

Recommendation: For action fans. Banana Fish looks great and has plenty of action to keep the crowd busy. Not for children.