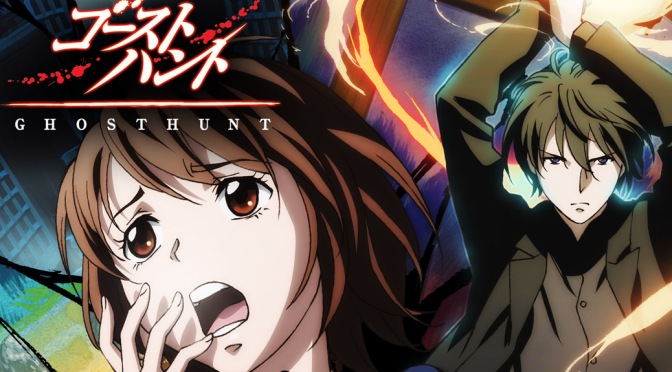 Ghost Hunt looks like arse, the performances are half-arsed, and these ghost hunters couldn’t tell the difference between a gust of wind and their arses. And that’s what makes this anime fun.

For reasons that could never see justification, Mai is forced to work as the assistant to 17-year-old Kazuya, sceptical ghost hunter of the Shibuya Psychic Research Company. Their slave-master relationship begins at her school with the case of the abandoned school building, but soon goes on tour to other haunted locations in Japan. They are joined – rather coincidentally – at each site by a rock star Buddhist monk, vain Shinto priestess, TV spirit medium, and (my favourite) an Australian Catholic priest.

The poor visuals and near absence of animation turned me off the series until the full cast of characters assembled at school. Unable to handle the bad PR of having a haunted building on campus, the principal hired someone from every religion he could think of to assist Kazuya. They are great together. I love that they each think everyone else is a fraud. It brings a good level of humour to the story, especially coupled with the inspiration taken from those fake American ghost-hunting series. A chair falls over and everyone freaks out!

However, nothing is funnier than the Catholic priest in the English dub. His accent is so bad that it transcends hilarity, so much so that I recommend watching Ghost Hunt in English. I couldn’t stop laughing every time he spoke.

The other strength of Ghost Hunt is in how they handle the mysteries. Each case takes three to four episodes, building layers to the backstory and throwing twists at the investigators. It isn’t as predictable as I anticipated. I like how Kazuya is a sceptic who doesn’t jump straight to the supernatural answer, instead checking if there is an earthly explanation for the weird occurrences first. Just when you’re sure it’s a phantom, he unveils a logical explanation or vice-versa. Furthermore, these aren’t generic urban myths you see in every horror series. The mysteries are good enough to keep you on the hook, wanting to know what happened, and the group dynamic among these hack frauds maintains decent tension and humour.

In an effort to dispel any notions that Ghost Hunt is a great series after all that praise, let us go through the problems. First, Mai isn’t a useful character. She is your typical audience stand-in – an ordinary person thrust into a paranormal world surrounded by experts (“experts”) that do all the work. Second, there is no need to waste time reintroducing the other exorcists each new case. And third, Ghost Hunt isn’t scary. At all. It could have made more effort with the horror side of being a comedy horror series.

I went in with zero expectations, which dropped further upon seeing the art and hearing the performances, but I came to embrace the goof once the cast gathered and the mysteries developed.

There isn’t much animation (no high detail to compensate either) and the shattering glass is so obviously CG. What else do you need to know?

You have to watch this in English for the Australian accent. He does have oddities in his Japanese dialect as well, but you won’t notice them if you don’t understand Japanese. The spooky OP is effective, though I wonder if the lack of lyrics was a budget constraint (made the best of what they had, regardless).

A high school girl becomes assistant to a ghost hunter to pay off a debt. With some possibly unintentional comedy and unpredictable mysteries, Ghost Hunt has enough to be good fun for cheesy horror fans.

Recommendation: Try it. Ghost Hunt’s slim budget and cut corners only add to the fun. This is a horror series for those who prefer mystery over gore (see Another for the gore).