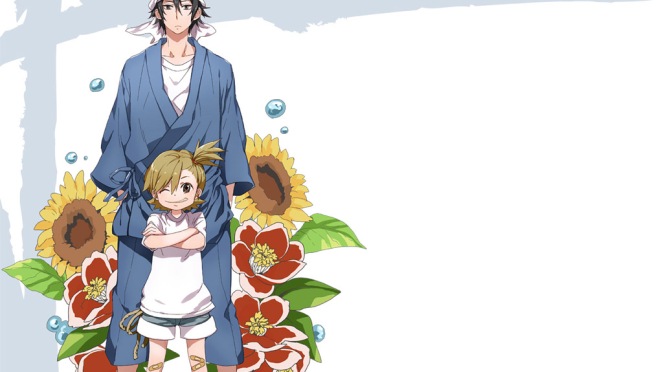 I am not a big fan of the slice of life genre, as the dear reader who recommended this anime had pointed out. My reason for disliking slice of life in general is that it’s full of do-nothing and go-nowhere plots. And the counterpoint I always hear to this is, “But it’s not meant to go anywhere! It’s slice of life.” Why am I wasting my time with it if it’s not going to make an effort at presenting anything?

Barakamon defies genre conventions by having great characters, actual story arcs, and a point to each episode. Furthermore, it breaks the mould of the “adult with a problem meets a child that will fix the problem”, a common sub-genre of anime slice of life, by not having everything miraculously resolved by the introduction of a child. At time, I believe that manga writers of this sub-genre have never been around children long enough to realise how much extra work they are, and not some solve-all McGuffin.

Anyways, that’s beside the point. Barakamon follows young calligrapher Handa, who has his career trajectory derailed after punching an art critic in the face (great way to open a series, by the way) and his father exiles him to a fishing island for self-reflection. As a city boy, rural life doesn’t agree with him, made worse by the local kids that use his house as a hangout. Worst of all is Naru – Damn you, Naru! – the rascaliest of the rascals. Her insufferable (to him) levels of energy will never allow him to get any work done – not that he could work when his well of inspiration has run dry. Perhaps the boisterous town and its nosy residents are what he needs…

Barakamon is immediately funny with Handa decking the critic followed by the introduction of Naru and the villagers. If I were to pitch this anime in a single line – artist retreats to countryside for inspiration and maturity – you’d expect it to be full of scenes with Handa staring out at sea, sombre in his musing about what it means to create art and the meaning of life. You know, the boring crap people pretend to think makes for “deep” movies. Instead, Barakamon takes the energetic approach to show us these themes through a variety of scenarios and characters.

This variety of characters is important, for it avoids the contrivance of having Handa’s every problem solved by meeting Naru, as I mentioned earlier. Everyone contributes a piece, just as in real life. And it helps that these characters are so much fun to be around, playing well as contrasts to Handa’s narcissistic Tokyo-kid tendencies. Best of all is Naru herself.

I often find little kids in anime annoying rather than the intended cute. Perhaps it’s just me, but the more annoying something is, the less cute it becomes, especially if it’s human. I’m not conflating being a kid with being annoying either. Anime kids are often nothing like real kids. What makes Naru different is that she doesn’t get her way with everything and she doesn’t come across as a moe character dropped on her head as a baby. When she does something wrong, she realises her mistake and works to remedy it – in her own goofy way, of course. Barakamon strikes a good balance with all the children. She isn’t a whiner either. She’s one of the strongest child characters in anime, no doubt. You wouldn’t know it looking at her face, but she’s excellent.

She’s an endless source of comedy as well. Oh, the way she talks is too precious. The dub is great, but you must watch Barakamon in the original Japanese for the authentic accents and dialects. This is effort. I love it when artists put the effort into capturing the voice of a region. The dialect gags, Naru’s attempts at learning innuendo from the older girls, and the country humour make Barakamon hilarious. Reminds me of the humour in Monthly Girls’ Nozaki-kun. Simply writing the lines here wouldn’t do them justice. You have to hear them for yourself.

Now, this anime isn’t perfect and I’m torn between where to place it. High or Very High? Its greatest weakness is in the conclusion. Not that’s it’s a bad ending, of course. In fact, I like the plot, the idea of the ending, but the execution feels flat. For one, it doesn’t feel Barakamon-ish, if you get my meaning. The execution feels common, lacking the voice of previous episodes. It’s almost as if they were adapting an incomplete manga and had to hastily throw a finish together to wrap it all up. It’s not bad, yet not up to quality of the overall series.

Regardless, I recommend Barakamon to everyone, even those averse to slice of life like me – especially those people. Naru has joined my favourite anime kids list and I’m sure you will love her too.

Uses well-timed “suddenly low quality reactions” as effective punctuation to the jokes and has good animation besides that.

Great dub. Still, you do yourself a disservice if you don’t watch it in Japanese. Naru’s accent is adorable.

A narcissistic calligrapher finds himself exiled to a lively rural town for some self-reflection. The characters, writing, and comedy make Barakamon a joy.

Recommendation: Watch it. Barakamon is too much fun for you to miss. I may place this in the Very High tier after it simmers for a little longer.