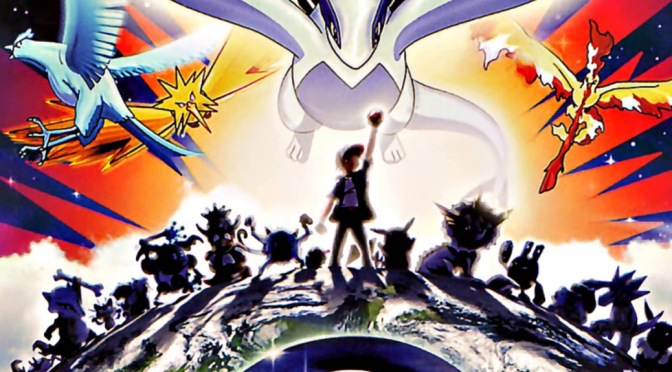 I had watched Pokémon: The Movie 2000 so many times as a child, even more than the Pokémon: The First Movie, that I lost count. It is perhaps third behind Disney’s The Aristocats and 101 Dalmatians for my most watched kids’ movies. It was a perfect storm of factors to make me love it. It was a Pokémon movie released at the height of my Pokémon mania, it featured Pokémon from Gold & Silver games, which are still my favourites, while also incorporating the legendary birds of the three elements at the centre, and gave it epic an scope to threaten the world. It’s as if Nintendo had asked little me what kind of Pokémon movie I wanted. It goes without saying, but I bloody loved this movie.

I hadn’t seen it in over a decade until I rewatched it for this review. So many memories came back to me, recalling a simpler time when I didn’t even know this was called anime, when I had no responsibilities and could waste time as though it wasn’t a limited resource. Fond memories.

Unfortunately, I doesn’t hold up as well as The First Movie. But before I get into why, let me cover the scenario in brief.

Lawrence, a man with more money than sense, likes to collect the rarest Pokémon in his gigantic flying fortress. On his crosshairs are the three legendary birds of ice, lightning, and fire – Articuno, Zapdos, and Moltres – which, when disturbed according to the prophecy, will summon the ultimate prize: Lugia. Disturbance of these legendary birds results in climate change that Al Gore can only dream of and is the reason for Lugia’s awakening. Ash Ketchum and company find themselves washed into this conflict when a storm carries their boat off course. Only Lugia and “the chosen one” (spoiler: it’s Ash) can restore balance to the elements and save the world.

I’ll go over a few positives first. I like that no one takes the prophecy seriously at first, that it’s just a story for the tourists to add character to this holiday island they end up on. By the end, it isn’t even clear if the “chosen one” aspect of the prophecy was true or if Ash just happened to be in the right place at the right time to help. As mentioned before, I love the legendary birds and their world-ending conflict feels appropriate to hype they receive in Pokémon lore. Later legendaries would power creep them to the point where one Pokémon is the God and still not feel as cool. The tension is also high from the moment the first storm hits.

Where The Movie 2000 falls flat is in the villain. Think about how many times I have seen this movie and know that I still can’t remember any of Lawrence’s character (even forgot his name). He is utterly forgettable. You compare him to Mewtwo from the previous movie and it’s night and day. Mewtwo has a clear motivation, with reasoning, a complete arc, and memorable lines. Lawrence has nothing to recommend himself as the star villain of your movie. The only positive I can give is that he’s not from Team Rocket, which is something different.

When you have a villain who isn’t a personal threat to the protagonist, it weakens the villain-hero conflict, which you need to make up for in other areas. For instance, you can have more conflict between allies to heighten the emotional drama. Looking at the previous movie once more, Mewtwo threatened Ash’s Pokémon and made them fight to the death. Now that’s heavy conflict. This apocalyptic scenario, while a tense rollercoaster, requires no emotional investment from the heroes.

As a kid, you’re first priority in a movie is the cool factor and the fun factor. Who cares about baby stuff like emotions and drama? Pokémon: The Movie 2000 is certainly cool and fun, but as an adult, it no longer contains the factors I desire most.

Before I go, I want to touch on something I didn’t properly notice when I was but a wee lad. Did they try to push a romance between Ash and Misty? The story introduces a new girl who tells them the prophecy and teases Misty about her feelings for Ash. I never got that sense from the series. Perhaps this was a test ground. Either way, it isn’t particularly relevant nor affect enjoyment. It’s just odd.

The art is a little better than The First Movie, except in the case of the CG fortress, though that isn’t a serious issue. I like the texture of the environments.

I have no comment on the Japanese. No matter what I do, I can’t get used to it. Meowth, as always, is the best. There is another cover song of the main theme like before.

A storm will destroy the world unless Ash can restore balance between ice, lightning and fire with the aid of an ancient Pokémon. This is a fun Pokémon side adventure, albeit one that needs a better villain.

Recommendation: For Pokémon fans only. Not only is this tailored to Pokémon fans, most references won’t make sense without prior knowledge.