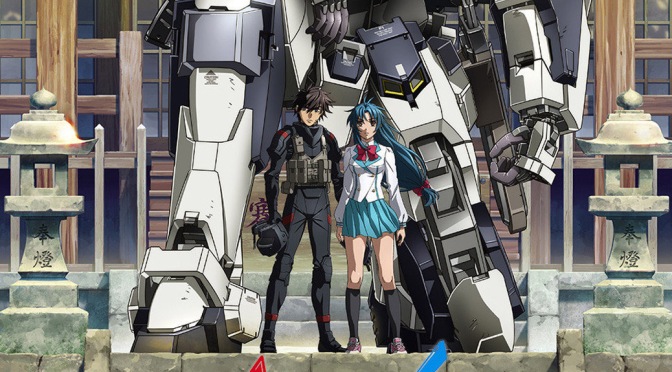 The original Full Metal Panic concluded without need for a sequel, followed by the pure comedy spin-off Fumoffu, until Full Metal Panic: The Second Raid reopened the story a few years later with the introduction of new villain Leonard, brother to Tessa, young captain of the anti-terrorist Mithril organisation. TSR took a darker tone as it pushed Sargent Sagara of Mithril to the edge in a satisfying conflict. However, Leonard evaded capture and it seemed the franchise would stop there, leaving us in limbo for 13 years.

Full Metal Panic is a franchise I never expected to see more of (please, Twelve Kingdoms, please come back). After a few years of silence, the finality of the situation sets in and there’s no point wasting hope anymore.

So, it’s back! And what a letdown it is.

Full Metal Panic: Invisible Victory isn’t bad – in fact, it’s rather decent, when seen from a distance. Sadly, we return to that old enemy of art, disappointment, the worst enemy, perhaps only second to that other evil called boring. As a continuation of the series, Invisible Victory brings so little to the table.

It picks up shortly after TSR, with Mithril in conflict against Amalgam, Leonard’s organisation, as it launches an attack on Mithril HQ. The start is strong with a series of high stakes conflicts and added tension by being much closer to home than usual. Sagara’s work has caught up with his personal life.

Leonard points out that Sagara has killed over 100 people so far, yet pretends to live life as though he isn’t a killer. Sagara’s reaction to this fact reflected against him is perfect. I love this wrinkle to his arc. It is ripe with conflict opportunities and consequences that could cost him everything. For instance, while dragging Chidori out of harm’s way from Amalgam, he uses a grenade to destroy a pursuing robot, but injures a passing student in the process. Sagara coldly abandons the kid against Chidori’s protests.

The problem with the story is what happens next.

A few episodes in after a devastating attack, we find Sagara on his own in a foreign land partaking in mech pit fights. For two episodes, we have no idea what he’s doing and it takes too long to get to the point, unengaging all the while. Furthermore, it introduces us to an entirely new cast of characters, none of which are memorable and at the expense of the core cast, who don’t do much this series. FMP did this before in season one with the four-part arc in Helmajistan, Sagara’s home country, to stop the sale of a nuke. The difference there was three fold. One: it didn’t waste our time wondering why he was there, away from the regular team. Two: the new characters were interesting for their short stay. Three: it was four episodes and not the focus of the season. To see that scenario imitated in Invisible Victory and done without excitement is disappointing. Some may argue that I shouldn’t compare it so much to the old, that this should be judged on its own. That’s not how direct sequels work, especially if one were to watch all seasons in succession now without the 13-year gap.

The most irritating fact of IV is how little it matters by the end. Leonard, who was the only incomplete thread from TSR, is still at large after having done little to nothing yet again. We are on the hook yet again to wait for another season, of which we have no confirmation.

One final aspect I must touch on is the use of CG for mechs and vehicles. It is undeniably rushed. FMP has used CG on occasion successfully – one of the few series to manage it. So to see Invisible Victory look worse than The Second Raid from thirteen years ago is baffling. It’s particularly noticeable when switching from a 2D close-up, detailed with battle wear, dents, and minor plays on light and shadow, to a CG long shot where the mechs no longer have detail. The models are too smooth, too clean. I understand why they resorted to CG. IV has a lot of mecha action, which would take time and effort to animate, and these fights have excellent choreography. The action is fast, fluid, and to the point. Sagara executes his opponents with the efficiency befitting his reputation. One skirmish in the suburbs between Sagara and several enemy mechs is particularly good.

I understand why. Yet, other series have managed to deliver a better product in similar situations – Studio Trigger regularly puts out great animation and Production I.G. often nails the CG used for vehicles in its titles. Full Metal Panic isn’t some small, untested franchise that can’t risk a larger budget. Why did this go to Xebec, a quick-and-cheap studio? It feels as though whoever was in charge didn’t care enough about the series, as if he had this forced upon him and just wanted it done, out of the way.

Full Metal Panic: Invisible Victory is a wasted opportunity above all else. The good elements of Sagara’s emotional arc, the fight choreography, and moments of surprising grit pale under the weight of disappointment.

Looks fine, outside of the CG during action scenes.

The voice acting and music is still strong. Go with the original Japanese like in past seasons.

Sagara’s story continues as the enemy attacks and takes Chidori. With little progress made in the plot and a dull second act, Invisible Victory doesn’t carry the momentum of its predecessor.

Recommendation: For Full Metal Panic fans only. You will feel lost if you haven’t seen the other series, though I highly recommend starting this franchise. Invisible Victory wasn’t worth the wait, however.