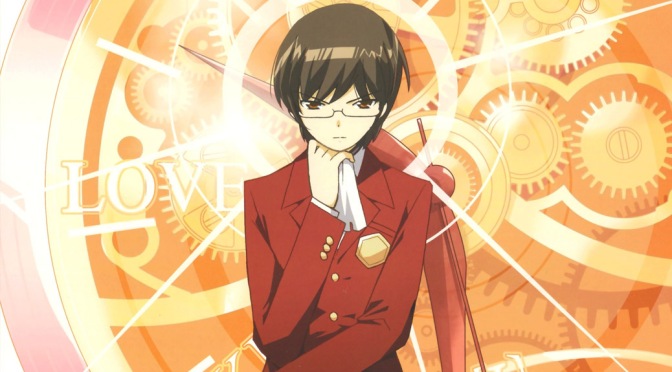 Related: The World God Only Knows II (included in review)

The World God Only Knows III: Goddesses (included in review)

Saekano: How to Raise a Boring Girlfriend

No Game No Life

Keima is the self-proclaimed führer of gal games (objective: romance pretty girls). When someone challenges him to prove his dating greatness, of course he accepts without hesitation. But oh no! The challenger didn’t mean 2D waifus. Keima has to venture into the real world and seduce the three-dimensional variety. Disgusting.

Furthermore, the challenge came from Death, who will kill him should he fail to seduce the girls and capture the evil spirits attached to their lovelorn hearts. A deadly collar links him to his partner in seduction, the demon from hell Elise.

The idea of having a 2D waifu god using the skills he learnt from games to entice 3D girls is hilarious. The World God Only Knows works as a comedy and is one of the few to do so with the harem label attached. This anime doesn’t half-arse it. Keima sticks to his game strategies in real life to a T even when they are spastic. The ingredient to success is the writer’s knowledge of gal games and ability to parody them.

As a side note, I find it hilarious that anime depict gal game otakus as pros since these games are so easy. I played a few for context with a previous anime and realised that once you’ve played one, you’ve played them all. They are all the same and too easy, which makes the gags in this anime even funnier, especially when Keima activates his Hindu god mode with the ability to play a dozen games at once.

Try as it might, The World God Only Knows cannot escape all problems of harem. Each episode or two is about some new girl with a problem, which has attracted a spirit, for him to help by using his gal game shenanigans. Because it introduces a new girl so often, you don’t grow attached to any of them. They are disposable. Allowing characters to grow would probably make them funnier as well. Furthermore, the girls lose all memory of the romance once the spirit detaches – convenient.

The third season has each girl come back possessed by different goddesses and he must romance them, yet again, to awaken each goddess’s power, which also recovers their memories of the first romance. It doesn’t add any depth to their character or the relationships. You may as well jump straight to season three and avoid the repetition or only watch the first season. Going for the full run did nothing but lower my opinion of The World God Only Knows.

The repeated plot splits the quality. The first arc has the introductions and the jokes, but the Goddess arc has the story, so whichever you pick only has half the relevant content, yet watching both puts you through the grinder of repetition. And not to mention, you have a second season in the middle of these two that adds to neither.

Your long-term enjoyment of The World God Only Knows depends on how much you love the core loop of an otaku using gal game tactics to win over girls. An episode or two will be enough to find out.

Good acting in both Japanese and English. Nothing peculiar to mention.

The god of gal games must step into the real world to seduce three-dimensional girls and capture the evil spirits attached to them. Despite one season repeating the other and the tedious harem elements, The World God Only Knows have more than enough comedy to entertain for a dozen episodes.

Recommendation: For comedy fans. Don’t let the harem tag stop you from trying The World God Only Knows, as it almost did for me. The comedy is good enough to enjoy beyond the harem, though 36 episodes is a stretch to keep your interest.

4 thoughts on “The World God Only Knows – Anime Review”