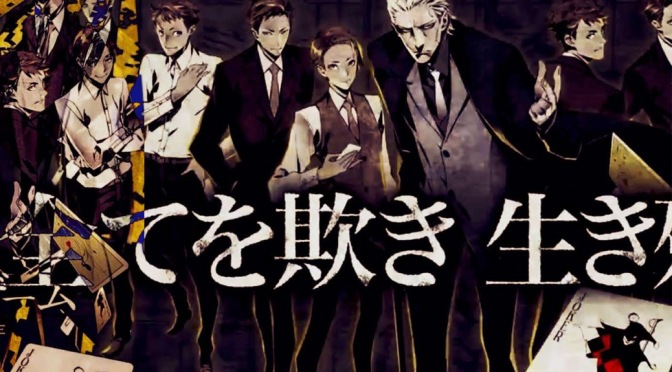 The world is on the brink of collapse. World War II is imminent. Sensing the danger and realising the importance of an intelligence network, Lieutenant Colonel Yuuki sets up Japan’s “D Agency” for spies. His eight agents are to spy on enemy and ally nations alike, using their training in manipulation and infiltration to gather intel for Japan.

Accompanying the request, my reader informed me of Joker Game’s divisive reception – liked in Japan, disliked in the West – which had me intrigued. The first episode seemed to make it easy to see which side I would fall on. What a mess of an episode!

It introduces us to D Agency through the eyes of Sakuma, a military police officer that liaises with them for the army. One evening, the spies invite him to join a poker game and he loses. However, they reveal that he didn’t lose. They had cheated by way of having observers to the game signalling the contents of his hand. It goes into this long explanation about cheating techniques, courting allies to your side of the game, and how this “Joker Game” is some elaborate metaphor for international politics. A load of nonsense.

For one, the metaphor doesn’t fit if you think about it for but a moment. One spy reveals that he converted an observer to his side by giving him a cigarette when in need, which is supposed to equate to flipping a political ally in Washington. Except, people don’t flip that easily. This oversimplification of politics, intelligence, and spies undermines the complexity of their work. I cannot stress enough how dumb it is.

Even with the incompetent metaphor, this could have been a great episode had we, the audience, had opportunity to get in on the game. You see, none of these spy tricks and cheats they talk of can we see during the game itself. There’s no opportunity for us to figure it out. They play an ordinary looking game followed by an explanation telling us everything. Why not show us? It couldn’t be less interesting. And you want the cyanide-laced cherry on top? The “Joker Game” is irrelevant to the rest of the plot. Yep, the whole affair doesn’t matter.

The larger series is an anthology, to my surprise, chronicling the spies’ assignments in various countries. Joker Game improves after the opening two-part story, but not by much.

Episode 3 has us travel to France to join a spy among the French Resistance. His plan, as it turns out, is idiotic and relied on sheer luck to succeed. Not the elite spy games promised, is it? Next we move to Shanghai, where a police officer investigates a possible terrorist bombing of his captain’s home. This is a decent episode, but it doesn’t have enough time to get into the details – details that invest the audience in the narrative. Joker Game tries to cram the entirety of Chinatown into 20 minutes.

That’s a core issue with this. The anthological nature doesn’t give a story time to breathe in a single 20-minute episode. Just when it feels like we’re getting started, the episode is over!

Joker Game only works when it focuses on a small event. The best instance of this occurs in episode 11 when a German officer investigates the corpse of a Japanese man, suspecting that Yuuki is somehow involved. The spymaster had escaped his clutches decades ago when Japan and Germany were at war in World War I. The entire episode is about the German trying to find one piece of evidence to confirm his fears.

I liked this episode so much that I feel the story should have been about the conflict between Yuuki and the German. It could have still had subplots spotlighting other spies (episode 12 is a great look at love in a spy’s life) while keeping the focus on the spymaster, Joker Game’s best character. He has such presence, thanks in no small part to his actors in either Japanese or English, that he could carry a series.

By the end, I found several things to like about Joker Game – really, that first episode is such a bad first impression that I could understand if most viewers dropped the anime on the spot. Many of the scenario ideas have potential, but the overall execution makes Joker Game feel as though it doesn’t know what to do with itself. There is too much in this anime. The second half is an improvement, though not enough to redeem the series. So as it turns out, I fall in the middle between Japan’s praise and the West’s rejection of Joker Game.

Spy stories are a rarity in this medium, so you will be seeing something different, at minimum, which for me is often reason enough to try something.

Good art as always from Production I.G., but this has little animation – expect many slow pans of characters thinking. A few episodes have superior shot composition, cinematography, and lighting than others such that you could be visually bored one episode and engaged the next.

Oof, what a mixed bag we have here. In Japanese, you have the least American sounding Americans in existence, whereas the dub has actors who can’t do accents. Episode 3’s French accents are awful – most sound more German than French! (Unless they’re meant to be German spies… Oh. My. God. What a twist!) The actual German accents are better, though one strays into Russian territory. Yuuki the spymaster has the standout performances in both versions.

Japan’s spy agency sends its agents around the world in preparation for World War II. After a terrible opening episode, matters slowly improve for Joker Game to conclude with a decent finish.

Recommendation: For spy fans only. I can’t see Joker Game going over well with most viewers, especially if starting from the beginning. I do recommend episode 11 to all for a nice tension piece.