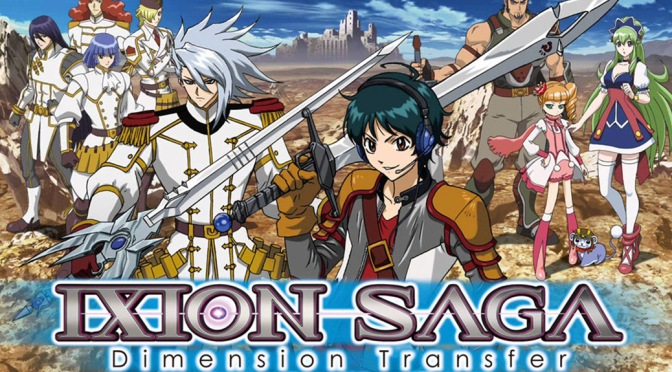 Is it Wrong to Pick Up Girls in a Dungeon?

Ixion Saga DT is another in the endless line of “different world” anime where some kid goes from the real world into a fantasy game. Except…it’s a parody, which instantly reignites my interest in the show. And you know what? It ain’t terrible.

There is some story involving the protagonist Kon “DT” Hokaze serving a princess alongside her other warriors in the world of Mira. The conflict centres on the magical energy called Alma. None of this is truly relevant. The story is merely in service to the comedy. I get the impression that the writer was watching the twelfth fantasy game anime of the season and started riffing on it. Figuring he could make more money from his riff track if it accompanied a story, he turned it into an anime – or so I assume.

That said, the story does have more elements and players in the proverbial game than most other anime of the genre, so if you do require something to drive the narrative, Ixion Saga DT has enough there.

The comedy hits its stride early with a great series of nut jokes at the expense of the enemy commander Erecpyle “ED” Dukakis. When in a fight, DT isn’t afraid of going for the cheap shot (many fantasy protagonists could learn from this guy), so naturally when in a fight against a trained swordsman, he goes for the nuts – spiky dragon boot right in the junk. Erecpyle wakes to the news that one of his nuts had to be removed. Next episode, he loses the second, and the ball puns that follow from his squad when trying to cheer him up after the loss are great. “We have more than enough balls to take on anything.” “They’d have to be nuts to think…” “We’ll crush every one of them nutsos.” Furthermore, his newfound ability to take a hit as no man can earns him the title of Fullmetal Ballchemist. And just wait until you see how the ball rolls to a stop at the end of his arc. I lost it!

The humour is juvenile, crude, not for kids, and quite funny. It works, granted you go in with tempered expectations.

Everything is a joke in Ixion Saga DT. The protagonist’s nickname of “DT” is a jab at the genre’s clichéd protagonists, which is shorthand for the Japanese word doutei, meaning “male virgin”. If you hadn’t noticed, Erecpyle’s initials stand for “erectile dysfunction”. Even attacks are a parody with names in the vein of “something attack” and “whatever beam” yelled at the top of their lungs for no reason.

The humour also turns to the meta when, before the final battle, DT prevents his comrades from making speeches and giving heroic lines because that is a sure sign they will die. There is even an attempt at peace through blasting Imagine by John Lennon across the battlefield. Ridiculous? Yes, but hilarious.

Ixion Saga DT isn’t a great anime, but it differentiates itself in an overcrowded genre by parodying the competition with surprisingly successful comedy. Had this been of a higher quality, yet without the humour, it would bore me into numbness – another Sword Art Online clone from the seas of Kamino. Going for a different angle was the correct move.

Low budget. Characters lack detail and poor quality control led to inconsistent body proportions. The designs themselves look near the levels of the “OC, don’t steal my DeviantArt” type.

Several actors are regulars to the otome genre – an interesting coincidence after Diabolik Lovers. The script is snappy from one gag to the next ball gag.

A kid from the real world works as a knight to a princess in the fantasy world of Mira. The story of Ixion Saga DT merely serves as a device to deliver the humour.

Recommendation: For anime parody fans. If you’re sick of seeing the same fantasy game anime each year, Ixion Saga DT will give you reason to laugh at them again.