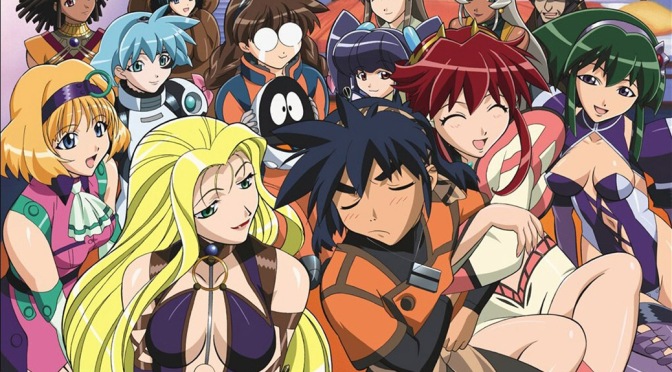 Vandread was the other anime from my ‘Watched but Not Reviewed’ list that I was tempted to revisit. Though unlike Scryed, which I surmised would still be good, Vandread was certain to be trash. But is it glorious trash?

In the future as presented by Vandread, men and women live on separate planets, able to reproduce through cloning to fuel the endless war between the two. Women are monsters who eat men, say the men! Men are savage barbarians, say the women! Generations of no in-person contact have led to the growth of demonising myths about the opposing sides. At the launch of the men’s new Vanguard battleship, low-class labourer Hibiki sneaks aboard to steal a mech, but finds himself captured by pirate women in a surprise attack. Oh no, they’re going to eat him! However, the battle created a wormhole, sucking the Vanguard and pirate ship into distant space, where the men and women must work together to survive.

These women aren’t part of female society anymore. The vanity war between women on their home planet made them strike out on their own to become something better. As for the men, Hibiki had no status on his world, the doctor wants to help others regardless of faction, and the Vanguard pilot finally has a purpose. An easy bond forms between the groups. The core theme of becoming something greater than your birth persists throughout every character arc.

Vandread is light-hearted – I mean, an episode is all about setting up the Christmas party – so set expectations to low.

The screen time alternates between space battles and comedy. The battles are terrible – don’t just mean the visuals – and aren’t worth paying attention to. The comedy largely plays on basic gender stereotypes in a fun manner. Main girl Dita is obsessed by aliens and calls Hibiki ‘Alien-san’ as she stalks him around the ship – she wants to confirm if rumours about men having a hose between their legs is true. Conveniently for her, his mech functions better with both of them inside yet has a single seat, forcing her to sit on his lap.

This isn’t a harem, surprisingly. I am amazed they resisted the temptation with a 5-to-1 ratio of men to women in the cast all aboard a single ship. That one choice makes Vandread much more enjoyable as a bad anime.

Vandread is as silly as it sounds. I used to like this show when I had seen a handful of anime. Now? The silliness is still fun in a bad way, but I find myself unable to care once the second season starts. A single season is enough. It looks like arse too, which tests the tolerance of your eyes.

All the CG for the ships and mechs looks awful. Character designs suck – the protagonist is a walking cliché of the era. He has many shounen anime clones.

The script is rubbish and the voice work is average, yet is fun because no one takes the material seriously.

In a universe where men and women live on different planets, female space pirates capture three men and find themselves teaming up to combat forces from all sides. Vandread is stupid in every facet in the right way to make it fun.

Recommendation: For fans of bad anime. If you don’t want to think and need to veg out, Vandread is the perfect remedy with its silliness.