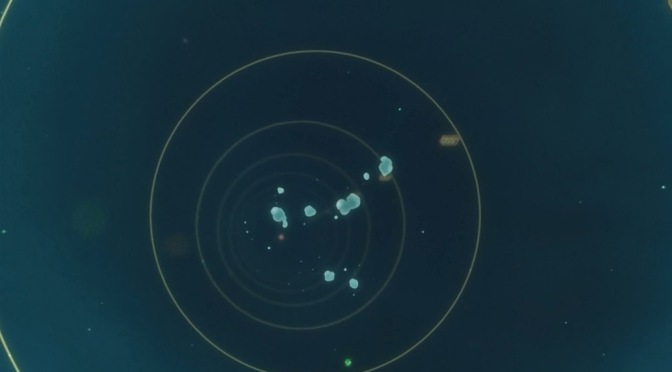 Masamune Shirow of Ghost in the Shell fame steps up into a lead production role to bring us Real Drive, a science fiction series that brings exploration of the human creature to a younger audience.

I never would have known that this came from Shirow had I not glimpsed his name in the credits on Wikipedia when doing background research. Real Drive feels like someone tried to imitate Shirow without understanding what makes Ghost in the Shell, or more specifically, Stand Alone Complex so good.

We find ourselves in 2061 AD when a virtual network called “the Metal” has linked human consciousness on a global scale. However, security leaks and data breaches have begun to affect people’s minds beyond the virtual and into the real world. The young Minamo finds herself at the forefront of the investigation after she pulls Masamichi back from a failed dive into the Metal. She is to work alongside her brother Souta, the android Holon, and other investigators to find solutions.

Shirow’s first mistake was Minamo. I haven’t seen Ghost Hound, Shirow’s young adult horror anime, so I don’t know if he succeeded there, but he doesn’t seem to know how to write using or for teenagers.

I hate all the young characters in Real Drive. Their inclusion makes no sense in this, let alone having one as protagonist. She barely has anything to do with the Metal, which is the core of the story. When Minamo hangs out with her friends, usually at a dessert café, it feels included because “you need to have that in a young adult anime or it won’t be relatable,” said Shirow, not knowing what he’s talking about. Her brother would have made for a better protagonist. He is a young counterpart to the old Masamichi, is a lead diver for the Metal, has the romantic subplot, and has a justified presence.

Also, what is with the “sexiness” at random moments? You have the usual panty shots – bad panty shots aren’t a surprise anymore, so whatever – alongside weirdly timed instances of characters trying to act sexy. For example, when an old woman is in agony, possibly dying, during episode one, her granddaughter/assistant (?) makes sure to pose cutely with her arse in the air. “Old woman is dying, so let’s focus on the teen arse and have her turn like she’s in lingerie commercial,” said someone during production. “Get on it stat!”

Next, we come to Shirow’s other big mistake, the virtual world itself. The Metal is incredibly boring. Remember Luke Skywalker floating in the batca tank in The Empire Strikes Back? Ever held your breath inside a swimming pool? Well then, you’ve experienced all the Metal has to offer. It isn’t engaging to watch people floating in water occasionally attacked by bubbles (!) as a substitute for action. Why didn’t he use marine life as proxies for viruses and data breaches? A monstrous, digitally warped shark is more frightening than bubbles. At most, we get some graphics in the environment and corruption on a character’s wetsuit. Do you know why Hollywood makes hacking sequences with effects, progress bars, and furious typing? Because real hacking is reading a bunch of text, which isn’t engaging.

I can’t wrap my mind around the notion that no one at production saw the Metal and pointed out that it‘s a load of nothing. The best scene in Real Drive is the very first, set in the past when a dive turns catastrophic. There is real action. After that, dives are mind numbing.

The vagueness of the overall plot compounds this dullness. For many episodes, Real Drive is about solving virtual problems with no concrete goal. You can’t have a non-episodic crime series and say it’s just about solving crimes. You need to be more specific. Which crime? Is the goal to ultimately catch the Seattle Reaper? Shirow already knows this – Stand Alone Complex is about catching the Laughing Man – so I’m surprised at the fault here. This gives the impression that he had an idea – “I want a series about solving virtual crimes” – but didn’t flesh it out, get at the core of his idea. I doubt Real Drive would have received the green light had it not had the name “Masamune Shirow” attached.

What is with the doughy women? Every female character has extra dough packed on, even those that are said to be thin. I suspect that the artist has a fetish for “thicc” women, as the android Holon, designed to have the ideal female physique, is definitely for those who want to get down with the thiccness. The world has a lovely design akin to a futuristic paradise island, but the virtual side is plain water.

The music boasts a great orchestral soundtrack. However, the sound mixing is horrendous at times. In episode two, a scene of Minamo whining to her brother about breakfast has building tension music from the likes of Fantasia. Fire the mixer. The acting is fine.

A team of investigators dive into a global consciousness known as the Metal to resolve problems of this virtual world. The Metal is dull, the teenagers are superfluous, the sexiness makes no sense, and the plot offers little reason to keep watching Real Drive.

Recommendation: Don’t bother. Real Drive is a poor man’s Ghost in the Shell: Standalone Complex…made by the same man.