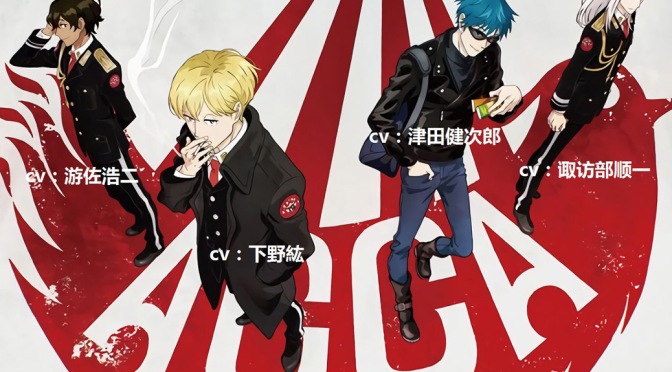 What an unusual anime. When a dear reader requested ACCA: 13-Territory Inspection Department for review, I wasn’t really looking forward to it, if I can be brutally honest for a moment. A bureaucrat goes around the states of a peaceful nation to audit the peace? What…? Where’s the conflict if everything is peaceful? I had to force myself to start it for the sake of the review.

The first episode didn’t impress me beyond the visuals. We learn that the kingdom of Dowa has known peace for a century thanks to a government initiative called ACCA that cares for the needs of citizens. Rumours have started stirring, however, of a coup d’état against the king. Jean Otus of ACCA now has the job of auditing the Dowa’s 13 territories to see how peace suits them and to uncover the truth of these rumours.

The slow start and lightweight feel, for lack of a better word, to the mystery of the rumours didn’t compel me to keep watching. If not for the “peace” in the blurb, one would expect ACCA to be in the vein of Bridge of Spies and similar Cold War films, where tension holds the very fabric of reality at peace. But because Dowa is at peace and the storytelling slant is tranquil, I found myself questioning why this story needed telling. I don’t joke when I tell you that only my love for the visuals kept me going. (If I’m not feeling an anime for review, I will often take forever to get through it.)

By the second episode, I’m starting to love the opening song (I wouldn’t skip it from here on) and the protagonist Jean is growing on me. Let’s not forget Mauve, one of anime’s most gorgeous women and her role in the plot. She has a mysterious air about her and this sultry confidence that made me unsure if she truly was Jean’s ally. Then we learn of someone spying on Jean, who himself is acting like a spy in his tour of the states. The layers of spying go all the way to the top. I’m not hooked, but I’m no longer dreading it.

The problem with ACCA is the overrepresentation of daily life. I understand that this is a country at peace and peace breeds routine, monotony in society. But! They should have worked in more spying as an undercurrent to the ordinary events, extracting bits of information during chitchat, and everyone suspicious of something, all with a fun angle like The Man from U.N.C.L.E. and Kingsman. From the outside, it would seem like daily life, but underneath that is spy work. The existing second acts of most episode are boring. Most third acts of episodes interested me enough to keep going.

The second issue I have with ACCA relates to the territories. Each territory has a specialty – one is agriculture, another makes all the movies, and so on – yet most of them don’t feel much different and aren’t interesting, unlike Kino’s Journey where every location brought something new. It wasn’t until Jean visits the territory that lives akin to 17th century France, with electronics such as mobile phones banned, that my interest piqued. Alright, some variety!

The core of the plot also comes to light soon. As the coup builds, Jean needs to learn which side each district will fall on, should a power play occur – with the crown or the conspirators.

ACCA had slowly built my interest until the third act, where it delivers its best episodes as all the secrets come tumbling out. If anything, its story is too end-loaded and could have measured it out more to boost engagement earlier. Still, the strong finish left me with a good impression.

ACCA’s aversion to anime tropes also helps its case. In fact, the one notable trope it does use – goofy co-workers from Jean’s home office – is an eyesore. Their comedic relief isn’t funny and doesn’t fit the tone of the show. Their inclusion was to counterbalance the drama, though the fun spy work I mention above would have been more fitting. It could have done without them.

ACCA: 13-Territory Inspection Department isn’t going to blow you away nor is it a great anime, and yet, because it’s something different, you don’t have the feeling of “same old, same old” when watching it. I urge you to give it a chance.

ACCA looks different yet familiar to anime. I love the colours and character designs. This anime adores animating things fluttering in the wind. It also uses small visual techniques you rarely see in anime, such as characters fading into view as the camera reverse dollies through them.

The OP is great and went on my playlist before I finished the series. The woman’s vocals struck me. As for the acting, it’s good in either language, so go with your default preference.

An inspector from ACCA, the government department responsible for the country’s peace, travels to the 13 states after rumours of a coup d’état surface. ACCA overcomes its dull segments with an unusual concept executed through interesting characters.

Recommendation: Try it, I urge you. ACCA: 13-Territory Inspection Department won’t be for everyone. In fact, this little-known anime will interest very few among us, but it’s worth trying in case you are one of those few. I wouldn’t want you to miss out.