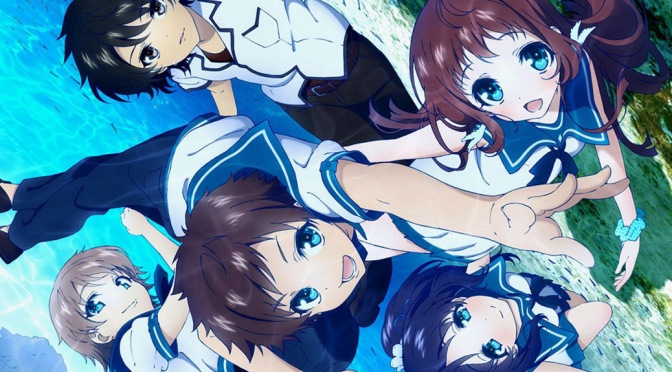 Oh wow, an anime set in an underwater town. Look at those colours, those fish! I love the sea and marine life, so this is going to be good. I’m excited!

That’s how long my excitement lasted for A Lull in the Sea. It starts with beautiful colours in this magical underwater town teeming with life and detail, but not five minutes later, you see that the sea people move underwater no differently than someone on land. Everything has the same weight as on land, people stroll down the streets like on land, they speak the same as with surface air, and they even watch TV like on land. On land, on land, ON LAND! What is the point of setting it underwater if everything functions the same as on land? All they show is one scene of a guy doing a floaty jump with the aid of water and characters swimming on occasion – no faster than ordinary humans! Argh, if they swim the same as we do, then why doesn’t the water affect all else that they do? How lazy can one be in creating a world? Effort went into figuring out how they can survive on land without salt water – take regular salt baths – so why not put a day’s work into the rest of the lore? And I haven’t even gotten to the story yet.

Right, after presenting us with this lazy world, we learn that the teens from the sea must start attending school on the surface, as their high school closed down due to dwindling birth rates. Hikari and his friends have trouble fitting in with the surface kids, for a deep-seated hatred simmers between the two societies. However, when the fisherman’s son Tsumugu accidentally catches the sea girl Manaka, there may be a chance at bridging the gap before the sea people hibernate.

The story isn’t much better than the world building. Hikari is a shouty protagonist – always annoying – and his first character moment is yelling at Manaka for wearing the surface school uniform, instead of their old one like the rest of the group has. She makes friends with Tsumugu and all Hikari does is spew bigotry at the guy. He’s the most bigoted of the lot. This is obviously to set him up for change later on, but you have to give us something to like about the character from the start. No, he’s just a prick – doesn’t come around to be likeable or interesting either.

The rest are the usual forgettable players in slice-of-life-turned-melodrama anime. People butt heads here and there, some fall in love, others fall out of it, people grow jealous, all dragged out for too long. Everyone loves someone who doesn’t love them, creating this massive love circle. It’s tedious.

With the way these kids act about romance and relationships, you would imagine they have been through the most brutal hardships in love. But no, they’re immature kids and this is garbage melodrama.

There are some good moments, however. I like the conflict stemming from banishment should a sea person marry a surface human. The local fisherman have nice stories to tell as well. In fact, the less important a character seems to be, the more interesting their story.

What really knocked this anime down an entire tier was the pacing in the second half. These 26 episodes could have fit into 13 had one character’s amnesia arc not gone on forever for no good reason. Just end already! I cannot impress upon you how much this play reeks of desperation to extend the story and heighten the stakes. Since these stakes don’t matter relative to the rest, it only weakens the overall effect.

A Lull in the Sea is a standard high school drama that goes for the heart with a supernatural twist. I wager it would have affected me a decade ago, but my heart has since turned to ice. In all seriousness, you’ve seen this all before, which coupled with the padded second half and lazy world building makes this a no from me. Don’t waste your time.

The underwater environment looks gorgeous with light refraction, Greek architecture, and the abundance of fish, though they should have put more effort into the submerged physics. Sadly, we spend little time underwater. Land scenes are still rather good. Character faces are munted with eyes melting and some profile shots don’t look human.

The first ED song is gorgeous (going on my playlist) while the rest of the music is good and the acting is fine. However, the script needs a trim and more punch.

A group of friends from the underwater city must get along with other students at their new land school, but the impending hibernation threatens all they have worked for. A Lull in the Sea overindulges in melodrama, dragging out a good concept into a chore to complete, and the world building is lazy.

Recommendation: Skip it. A Lull in the Sea is a waste of time unless you love overwrought melodrama. A better-realised water world would have been enough for me. They failed.

7 thoughts on “A Lull in the Sea – Anime Review”