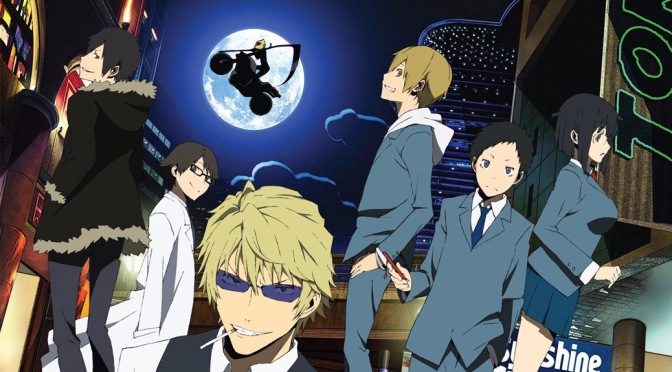 Durarara is Baccano, but bad. I consider few anime that I’ve finished as a waste of time. Even the worst anime has value to me, for it gives something to discuss and lessons to learn in character and storytelling. This is one of the few exceptions. A chore to finish, an effort to enjoy, and with little to discuss or learn, Durarara was a waste of time.

The story focuses on the legend of the Black Rider, a headless motorbike rider that prowls the streets of Tokyo’s Ikebukuro district amid increasing gang activity. Mikado is caught up in the commotion when he witnesses the Black Rider on his first day in Tokyo. He will rely on friend and failed flirt Masaomi to guide him through the supernatural events and all manner of strange characters.

Durarara doesn’t open with great promise that derails later on. This is a case of never showing any promise to begin with, leaving us waiting for when it will get to the point, show us it purpose. It seems to do everything it can to avoid showing us its story, as if under the misapprehension that by doing this, it will make the final revelation a masterstroke.

Durarara wants to be character driven with its large cast, each exhibiting grey qualities, which is one of the elements that made Baccano a success. However, it wastes far too much time repeating conversations where characters explain their motivations. Because so little time is spent on events to drive story, characters don’t have much opportunity to show us who they are. As a result, they have to tell us and then repeat it again later. This is only for major characters. Minor characters, on the other hand, don’t even exposit or discuss events. They chat about random nonsense that tests one’s patience. There is so much excess dialogue.

All of this makes Durarara comes across as more slice of life than action.

Most story is end loaded in the final few episodes. When the big revelations about character identities and gang power plays come out, the series goes, “While all those useless characters where chatting about whatever, these other characters were secretly manoeuvring behind the scenes. Surprised you, didn’t I?” Yes, I’m surprised – surprised that you managed to squeeze out any story at all.

I had wanted to watch Durarara for the longest time after Baccano, one of my first reviews, hoping to find a similar experience. What a letdown. Had the characters been close to the level of Baccano’s cast, I likely would have enjoyed it despite the poor story, but these aren’t interesting. One guy’s gimmick is getting angry at the slightest provocation. It’s funny the first time, sure, but it’s the same joke every episode. Grow some dimension! The black Russian advertising his sushi restaurant on a street corner is also amusing, yet that joke too grows old.

Everyone is forgettable save for perhaps the Black Rider searching of her head. Bringing the Dullahan myth to modern Tokyo on a bike instead of a horse is a cool idea. Her story is decent as well, though she only has material for a few episodes – not enough to carry the team.

This anime was a personal choice I wanted to watch amidst the reader requests. I was certain this would be a hit. I don’t blame the production crew – Durarara looks and sounds great. The source light novel is a mess to begin with, as are the Baccano light novels, incidentally, which make me more impressed with the latter’s anime adaptation.

The first season wraps up its plot, so I have no attraction to watch the sequels. I usually finish every direct sequel for my reviews, but I won’t bother with Durarara.

Durarara uses the same style as Baccano, crazy opening included (without the great song, though), has great animation, and with normal yet distinct character designs. However, background characters are often greyed out – budget or style?

The acting is great, in either language, but the script is so damn bloated. Characters repeat themselves often and minor character dialogues are a waste of time. The ED is catchy.

The new kid in Tokyo finds himself mixed up in gang wars amidst events involving the mysterious Black Rider, a supernatural biker in search of her head. A single strand of good story resides among the tangle of threads that is the mess called Durarara.

Recommendation: Don’t bother. Durarara takes such effort to enjoy that I would recommend almost any other anime instead.