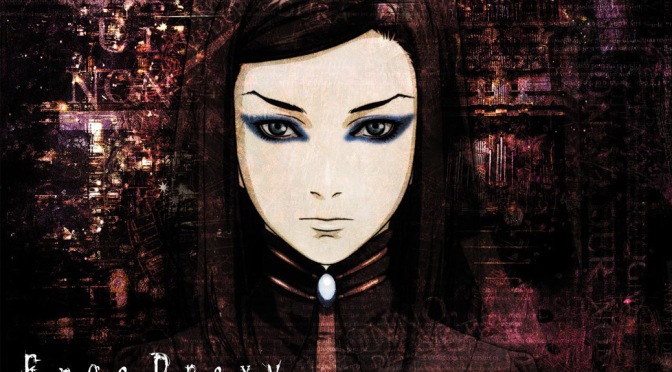 Ghost in the Shell

One of humanity’s last civilisations resides within the domed city of Romdo, where robots called AutoReivs supplement the low population on the path to humanity’s recovery. When a virus begins to infect these robots, Re-l Mayer gets on the case with her AutoReiv Iggy, but the case grows beyond her imagination and out of her control when a sentient and independent robot confronts her at home.

Despite what the setup may tell you, Ergo Proxy isn’t a crime series along the lines of Psycho-Pass and Ghost in the Shell. This focuses on the psychological, taking Re-l, Iggy, and AutoReiv engineer Vincent on a mind-altering adventure into the heart of Romdo and beyond its walls.

A favourite old movie of mine is Logan’s Run, which also uses the premise of escaping humanity’s last bastion, a domed city where the rulers justify the control they exert over the people. Such a similarity had me excited for Ergo Proxy, as did the dark style. I love the AutoReiv designs – they recall Jhin from League of Legends. Their masks give the feeling that they’re hiding something, made even more suspicious by their “natural” personalities. Iggy follows the rules to the letter, though will bend if you present a loophole.

The story starts strong with plenty of intrigue. No one believes Re-l’s story of the demonic ‘Proxy’ AutoReiv and someone has modified Iggy’s memory. The journey beyond the dome continues the intrigue. However, it isn’t long before the story takes a backseat to psychology. Rather than weave it into story, Ergo Proxy pauses to dump psychology through a jumble of mind-numbing scenes.

Have you ever watched two similar stories, found one engaging and the other boring or difficult to finish, and couldn’t put your finger on what made the difference? They were both well made and had good actors, so why weren’t they of equal quality? It’s in the storytelling techniques. You often see this distinction between great crime serials and the mediocre. The better series will show you the criminal mind and the detective’s process, whereas the other will sit you down and tell you what you should take away from the drama. Ergo Proxy has this problem with its psychology.

It’s hard to convey without showing the series, so I will use an example. One character suffers from an identity crisis with possible split-personality disorder. Instead of showing us this condition, this character has another character over the shoulder saying, “This is not your true self. The other you is your reality. Search your feelings; you know it be true,” (or something similar). For two episodes! It is nonsensical babbling, unneeded because later episodes gives us the relevant information again. This isn’t the only instance.

Ergo Proxy strikes at mind-bending scenarios about mistaken identities, existential crises, and philosophy, but it often gets lost in itself at the expense of cohesion. This results from being ‘too close’ to the art as the creator. When you write a story, you become the worst person to check if it makes sense, for the complete, sensible story in your mind automatically fixes any problems on the page before you have a chance to notice them.

Oddly enough, side episodes with no direct story relevance are my favourite. One episode has Vincent participate in a quiz show with the questions revealing lore and history about the world. A later episode is set in a bizzaro Disneyland, where the animal mascots are real, as made by a tyrannical Walt Disney. These episodes are refreshing in their clarity and fast pace. Yes, they are allegories about the society in which they live and they still have undercurrents of psychology, just without the drudgery.

I heard someone say that to “get” Ergo Proxy you must understand all of its symbolism and metaphors, which isn’t true. The core plot is a simple one of identity crisis – the symbolism is mere fluff that impedes more than it assists.

The psychological focus over crime wasn’t a mistake – I love psychology – but the narrative techniques to convey this psychology were a mistake. Some would have you believe that Ergo Proxy is a truly mind boggling experience requiring a very high IQ and a solid grasp in theoretical physics to appreciate its subtle genius. Is it pretentious? No, I wouldn’t say so. You don’t get the sense that Studio Manglobe wanted to come across as artsy. They tried something different and it simply didn’t work as well as they had hoped. They were too caught up in the process to step back and see what worked.

The dark and grim visual style is perfect for Ergo Proxy and it has great cinematography.

I love the choir music. The acting is good in either language – needs a tighter script.

In a domed city of people and robots, a routine investigation leads a woman to question her world and venture beyond the city walls. Ergo Proxy’s good ideas lie behind walls of unsound storytelling techniques that make it an effort to finish.

Recommendation: Try it. Ergo Proxy has limited appeal, but this psychological tale’s strange world and style will enrapture a select few.