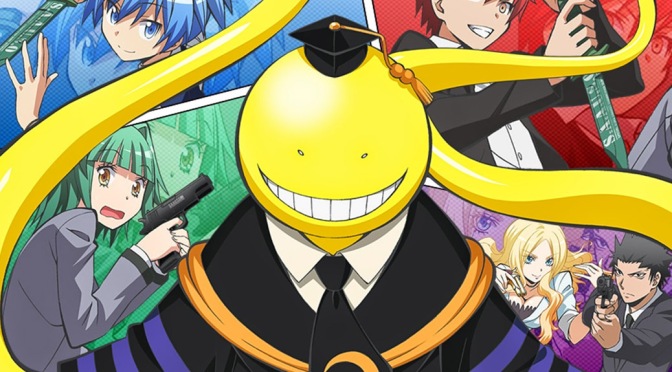 Class of delinquents 3-E has one task before graduation: kill their teacher, Koro-sensei! This isn’t an easy task when the teacher is a yellow octopus alien with super speed, god-like strength, and seemingly no weakness. Should they fail, Koro-sensei will rend Earth apart as he did to the Moon.

Assassination Classroom should be a slam-dunk success. The premise is so ludicrous that failure seems impossible, and yet they managed the screw it up. The humour doesn’t work, repetition drills the mind, and a confused identity results in an anime I wouldn’t recommend to anyone.

Let’s start with the humour. Half of the comedy is ‘lol random’ and other half is predictable, going for the obvious joke. Assassination Classroom runs out of material within two episodes. Each episode features copies of the following jokes: students surprised at Koro-sensei’s speed despite seeing it every day (their reactions fill what feels like half the dialogue), kids being idiots, and the slutty teacher doing something bimbo related. None of the characters are interesting enough, largely owing to no personalities or memorable characteristics, so you can’t lean on them for enjoyment as you could in the likes of Monthly Girls’ Nozaki-kun. Never underestimate the power of good characters to hang out with. The students of 3-E are supposed to be the worst students, yet we never see proof of this, which is a missed opportunity, as that should be their unique selling point and source of comedy. They’re simply generic.

Assassination Classroom tries to teach a moral each episode through Koro-sensei to his students, commentating on the intense and overbearing nature of studies in Japan. He helps them in their assassination attempts – a recurring joke that isn’t as funny as it sounds – and mentors them in life, despite his threat on the world. The aim is to evoke emotion when he is the only teacher that gives these delinquents a chance. Don’t kid yourself, Assassination Classroom, you haven’t earned the audience’s trust to start moralising about life. How are we supposed to take any of these lessons seriously when your poorly handled humour undermines the message? Do you really believe anyone will become a better person from hearing this tripe? Try applying effort next time.

There is no tension, if that’s what you’re looking for after reading the impending doom premise. There are no consequence, not even in a comedic way. A suicide bomber in episode one survives his detonation because Koro-sensei shields him at the last millisecond. It would have been much funnier as a dark comedy like Hot Fuzz, but that would require talent.

Each element of Assassination Classroom is in competition with the other. It can’t decide if it’s a comedy, a death game, a commentary on Japanese education, or about assassinations. These aren’t mutually exclusive elements – a decent author can handle easily – yet here they feel like a fart during a dramatic death scene.

Assassination Classroom doesn’t sell its concept whatsoever and is such a failure in execution that you shouldn’t give it a minute of your life. I have an idea: watch Hot Fuzz instead.

Here we have the modern generic designs for characters, just as Zegapain had a decade ago. The animation is cheap, static, often using the patented Dragonball Z teleporting action.

The acting is passable with nothing to say. The opening sequence could kill Koro-sensei with cancer.

A classroom of students must assassinate their alien teacher before he destroys the world. Assassination Classroom has a potentially hilarious premise executed by repetition and bad humour.

Recommendation: Skip it. Assassination Classroom is a waste of time unless you love seeing the same bad jokes every episode.