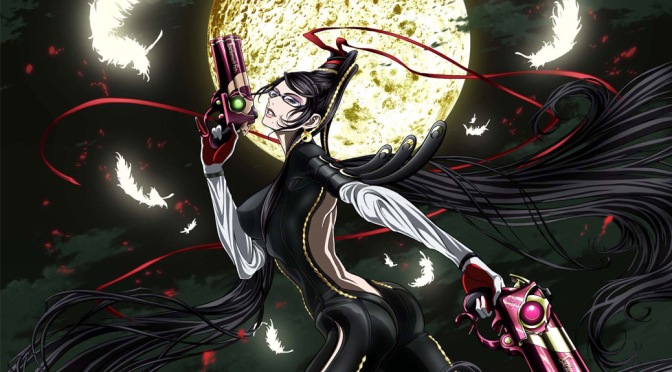 Bayonetta 1 & 2 are the flashiest, most stylish, and greatest spectacle action games of all time, starring the sexiest lady in gaming. These games are fast and crazy, so Bayonetta: Bloody Fate has much to live up to.

Umbra Witch Bayonetta searches for her memories assisted by bartending weaponsmith Robin, dogged by journalist Luka, challenged by rival witch Jeanne, and attacked on all fronts by forces of Light. The journey twists when she meets a little girl also chased by hordes of Angels.

Much like Neon Genesis Evangelion, this franchise takes the biblical End Times view of heaven and angels, giving us some of the most weird and twisted angel designs ever created. Just look at Fortitudo below (yes, he is the right way up). The Angel boss fights are epic in the games and though you do feel some sense of that in the anime, it simply isn’t the same. That’s the problem with Bloody Fate: despite being flashy, stylish, and crazy, it is nothing compared to the games.

Even so, this isn’t a bad game-to-anime adaptation – a hell of a lot better than Devil May Cry of the same genre. Bloody Fate goes through the story of the first Bayonetta game, almost exactly – they even incorporate the motorbike level reworked for story flow. This feels as though it came from a team that actually played the game first, but had time limitations to contend with and made the best of it. What we do receive is plenty of fun.

However, the anime lacks the sense of lore and myth, for lack of better terms, that the games used to convey story. These shortcuts are the curse of any game-to-anime adaptation. As such, you need to have played the game to understand the Angels and Witches fully. The other glaring issue, one I don’t recall being in the game, is the exposition. Heavens above! Ninety percent of exposition is one character telling another character what they both already know. What makes this particularly strange is that other characters who don’t know the information could be used instead.

If your interest is the action, then there are no problems. Bayonetta still tears it up in her usual sexy manner.

I’m not sure for whom this is intended. Fans will prefer the game in every way, while new viewers will miss much of the context from not having played the game. I enjoyed it as a piece of nostalgia taking me back to the game, which I haven’t played in years but now want to revisit. Perhaps that is the true purpose of Bayonetta: Bloody Fate…

Looks great with stylish action and sexy characters. A faithful recreation of the source material.

This Japanese track is fine, but nothing beats Bayonetta’s voice in English. Boy does the script need work though – an amateurclass in exposition. I wish more of the game’s songs made it to the anime.

The sexiest witch in Heaven and Earth hunts down divinity’s minions in the search for her past. The characters still have the fun from the games, yet the truncated story and lack of ‘gameplay story’ is noticeable.

Recommendation: For fans of Bayonetta or flashy action. Without background context from the first game, the anime adaption is a bit vague unless all you care about is the action.