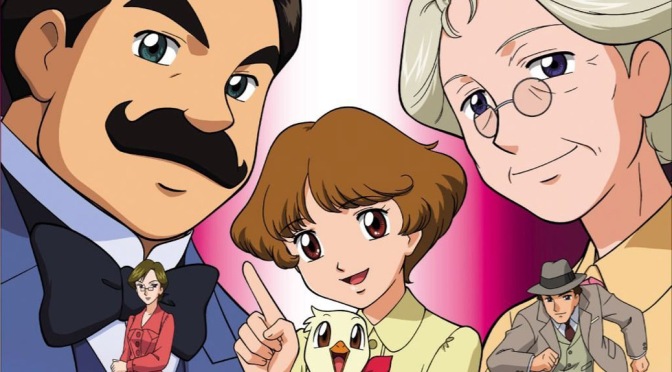 It’s always interesting to see how foreign cultures adapt English works, just as we adapt foreign works. With Agatha Christie being one of my favourite authors and her Poirot as the best detective series, I am especially curious about this anime adaptation.

As the title suggests, Agatha Christie’s Great Detectives Poirot and Marple takes the legendary mystery author’s two biggest detectives and combines them into a series for children. Twenty cases feature from the extensive library of Hercule Poirot and Jane Marple novels, each spanning one to four episodes.

The greatest change from the source material is the addition of a young girl called Mabel West, daughter of mystery writer Raymond West, who works her way into the position of Poirot’s assistant through means that aren’t quite clear. It makes no sense that Poirot would need her, which he tells her, by the way. Poirot barely tolerates having to work with professionals. It is clear that the girl’s inclusion is to give the target audience a stand in character. I would have no problem with this had she been written in with more skill, not this shoehorned result we have here. She doesn’t contribute to cases. All she does is point out evidence done by other characters in the books or ask obvious questions to make sure the kids notice this information. No one needs her.

The first incident is The Jewel Robbery at the Grand Metropolitan with the theft of a rich woman’s pearls from her hotel room, introducing us to the general style of the cases. A crime happens, Poirot and the police investigate, they lay out the evidence, deception and herrings abound, and it ends with Poirot (or Marple, in her cases) unmasking everyone. These simplified cases have less subtlety compared to the sources to give kids a chance to spot extra clues or figure it out ahead of time. After a few single-episode cases, we get the four-part ABC Murders for the audience to sink their teeth into.

My biggest disappointment with Great Detectives is how Poirot doesn’t feel like Poirot. He is meant to be an eccentric man, who both irritates and charms. Apart from his prodigious moustache (still tame by comparison) and occasional mention of “the little grey cells”, he isn’t like the great detective. Furthermore, Poirot was revolutionary at release for solving cases through psychology over clue hunting. Here they focus on clues. I suspect a psychological angle may be too much for little kids.

And that’s the ultimate point: this is an anime for kids. I’m sure they would enjoy this a lot than me and it does make for a good introduction to Agatha Christie. As for adults, watch Poirot starring David Suchet, which adapted every case into an exceptional series over 24 years (start with the ABC Murders in season 4 for a great sample).

Obviously on a budget with not much in the way of animation. Great Detectives uses the painterly environment art style reserved for seemingly every anime set in England.

I’m not sure the vocalist for the OP and ED can sing – maybe it’s the style. The acting is okay, though no one feels like their original character.

A young girl joins the great detectives Hercule Poirot and Jane Marple as they solve classic cases in 1930s England. The simplification process for children gives no reason for adults to watch this over other adaptations.

Recommendation: For kids only. Adults, I cannot recommend enough watching Poirot instead. David Suchet is the perfect Poirot.