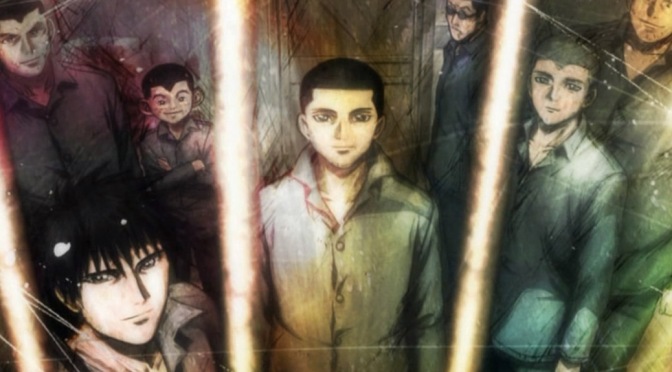 Grave of the Fireflies

Post-war Japan was a harsh place. For the poor, the abused, life was rough as the country tried to rebuild. In 1955, six teens find themselves on the wrong side of the law and sent to a correctional school, where they meet Sakuragi, their new cellmate. The events that follow will push them to the limits, punish them for daring to live, and test their resolve for survival until their sentences in hell are over.

Rainbow is brutal, not for the faint of heart. The production team warns you as much each episode with a disclaimer that the brutality, the depravity you will see is accurate of the time and it would be a disrespect to hide it. The first experience in prison is to have the doctor violate one of the boys in front of his friends. The doctor has a faux-gentle voice that makes one’s skin crawl. We witness a child rape not long after. It won’t be the last.

Rainbow never relents with either the characters or the audience. If you are to start this journey, know that peace never truly arrives.

Day one in the cell, Sakuragi beats the ego out of the other six to teach humility. Survival of the fittest is the only natural law that matters in this “school” and reckless bravado will get you killed. He becomes a role model to the others, uniting the group in friendship that even hell will have a tough time breaking. This chemistry between the boys not only makes Rainbow engaging but also loaded with emotion. When all of them put themselves on the line to allow Joe to see his little sister and save her from the rapist that adopted them, you feel a genuine bond tying these guys together.

Each brings something to the group with a distinct personality. The short but business savvy ‘Turtle’ has an endearing cockiness about him. ‘Cabbage’ is a friendly giant, ‘Soldier’ is disciplined, ‘Uncovered’ may be a bit of a prick but he’s got a plan to cover your back, and Mario is loyal to his own detriment. Every character in Rainbow is memorable thanks to a complete backstory and complex characteristics. It’s evident within an episode or two that the creator didn’t take any shortcuts when planning his characters.

As I watch these characters grow, I want nothing but the best for them. I want to protect these guys. I want them to be happy. Why can’t they catch a break? Why can’t they just be happy? It’s rare for a story to have me care so much for so many of its characters.

Their camaraderie evokes emotional moments. The most emotional scene for me doesn’t involve any violence or tragedy; it’s just everyone being there for one in the group when he needs them most.

The best arc in Rainbow belongs to Sakuragi, however, because of the conflict between him and the prison guard, a man who will stop at nothing to ruin his life. The guard tries to sow dissent among the friends, tortures the guys, and is complicit in the doctor’s vile acts as long as he can continue to torment Sakuragi. Their arc is fantastic and unexpected in direction. Rainbow as a whole makes several unexpected turns – not twists exactly. Rather, you don’t expect the outcomes of certain threads and events. The writer took bold decisions with the plot.

If I haven’t made it clear already, Rainbow is an anime worthy among the best. Yet, nothing is without fault and the major one with this anime is that the second half isn’t as strong as the first, owing to a lack of cohesion between arcs. The second half is closer to a series of short stories for each of the guys. While these stories are great, the writer didn’t weave them together. It would have been better to run several stories in unison, leaping frogging each other through interwoven events. For example, Joe’s story is about wishing to sing while Mario’s is about his boxing. There is no reason these couldn’t have had connected events and a little shared conflict. Weaving arcs together deepens the connection and raises stakes further when more characters have something on the line. Even so, Rainbow is still excellent throughout.

I don’t know how this anime stayed off my radar until requested for review. I had the horrid thought the other day that I may never have seen Rainbow if not for one dear reader… Even though I’m certain I have every great (or said to be great) anime on my list already, I am going to go through the databases again, just to be sure another Rainbow doesn’t slip past me. Such great anime deserves to be watched by all.

The animation is only above average, but the visual style has atmosphere and the painterly stills during key moments are gorgeous, full of emotion.

You need great performances to pull off an anime of Rainbow’s weight, and they did it. I love the OP and ED, which stay the same throughout, unable to skip them each time they started. The only audio flaw is with some of the American characters likely played by expats in Japan with mixed acting expertise.

Seven cellmates in a juvenile reform school cling to hope and friendship during a harsh post-war Japan. Rainbow’s uncompromising conflict will have you engaged and cheering for these boys to the end.

Recommendation: A must watch unless you don’t like the brutal subject matter. Rainbow is a top tier anime that deserves a larger audience.