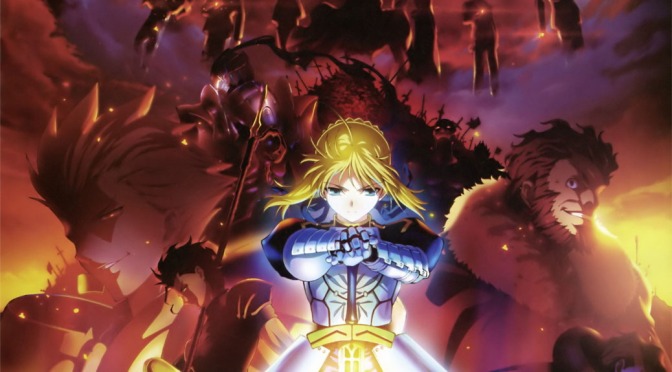 Fate/Zero is the prequel to the Fate/stay night visual novel and created by a different team, which can only mean good things.

Instead of a harem protagonist, Fate/Zero selects Kiritsugu the ‘Mage Killer’, hired by one of the noble families, and married to their heir, to crush the competition with his servant Saber (the same one from Fate) in the war for the Holy Grail. His opponents are a mixed cast of mages, noble and common, as well as different iterations of Archer, Rider, Assassin, Lancer, Caster, and Berserker. Kiritsugu displays greater depth than Shirou within moments. First, by having a plan, and second, by showing smarts in his method of attack. One of my issues with Fate/stay night was having kids instead of adults when the latter make for mages that are obviously more powerful. Kiritsugu isn’t an idiot kid, nor are his opponents save one that I’ll talk of later.

As if by magic, the servants also have complexity of character. Saber is no longer a good character solely due to her backstory. She has convictions, motivations, and opinions – all the important servants do. One episode in particular has a scene called ‘The Banquet of Kings’ with Saber, Archer, and Rider – three kings – sitting down to discuss their views on what makes a great king. They challenge each other’s ideologies, Saber’s in particular. The dialogue is something the old author could never dream of. The strength of character writing is no surprise coming from Gen Urobuchi, writer of Psycho-Pass and Madoka Magica. (He also wrote Aldnoah.Zero, though we won’t speak of it here.)

Not everything is gold and diamonds. The first episode has several minutes of two geezers walking around in a circle expositing the world and their plan for the war. Truly a masterclass of bad expository writing. And someone has to explain the whole Fate franchise concept, yet again, in the usual clumsy fashion. The writing is smoother once you clear those reeds. Oh, except for two awkwardly placed episodes of backstory for Kiritsugu – they’re interesting, but don’t seem to know where to go in the story, so occur in the middle of an event.

As for characters, one of the mages is a serial killer to match his sadistic Caster servant, which is a thrilling addition to the war. Unfortunately, both master and servant alike are flat. What you see upon introduction is the same throughout. Now, they do at least have major impact on the story, but they could have had more to their characters. In a series where identity is everything, Caster’s identity doesn’t matter. Missed opportunity.

For a pleasant surprise, we turn to Waver, a young mage in over his head trying to prove himself equal to “pure” bloodlines when he joins the war, summoning Rider. He’s the one kid and justified in his inclusion. Furthermore, Rider doesn’t respect him and flicks Waver for all the stupid commands, nor should he as a great king from history who conquered much of the world. This is what I mean by taking a moment of thought to justify why your story/character/conflict is the way it is. The original author wouldn’t have thought of this disagreement. Far from being mean, Rider is a boisterous character, a lion of a man that brings needed comic relief alongside Waver. Rider is my favourite of the servants.

The action sees improvements, even if it doesn’t look as nice as Unlimited Blade Works, and while you could point to a couple dozen better anime for action, the stronger characters and smarter plans increase the tension, placing value on who lives and dies.

I wish I hadn’t followed the Fate watch order guide and listened to my instinct to start with Fate/Zero. I would have enjoyed this anime even more if I didn’t know certain details that carry over to the main series. Fate/Zero stands as the only Fate series worth your time unless you really want to see the Holy Grail War repeated ad nauseam.

Fate/Zero still looks good without the flash of Unlimited Blade Works thanks to vibrant colours, better character design, and tighter choreography since that they don’t have cram in as many effects as possible. Now, some of the CG…ouch. Berserker looks hideous – a CG knight surrounded by a particle shroud, also in CG.

Ten years before Fate/stay night, another Grail War raged between mages and their servants of myth and legend. Fate/Zero abandons most of the garbage from the original series in favour of complex characters and meaningful action.

Recommendation: Watch it. Defying the franchise, Fate/Zero stands above the swamp from whence its predecessors came. Start with Fate/Zero to avoid lesser series from spoiling anything.