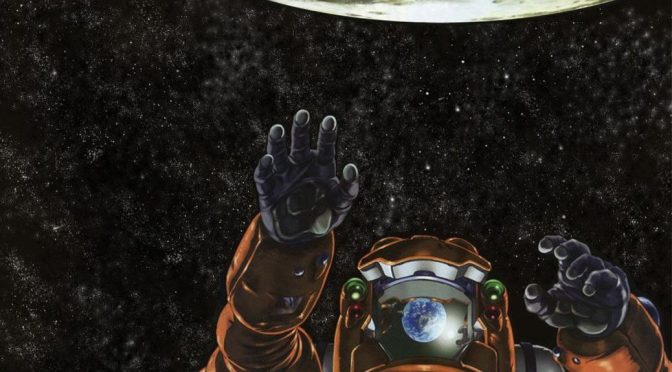 Does this really fall under the ‘drama’ category? I asked myself this question a lot when watching Planetes. Until the third act, this should be classified as ‘slice of life’ for how little occurs and how dull the characters are.

Planetes is about a crew aboard a space station and their jobs as space debris collectors. The opening scene is of a loose screw shattering a space liner’s window, killing all inside. Ever since then, Earth has made an effort to clean up space. Tanabe is the newest member of the collection crew, joining an odd bunch of misfits who have no manners, including Hachimaki, a 25-year-old with dreams of owning a spaceship of his own. Their equipment is trash. At this rate, they are likely to add more trash to space instead of reduce it.

After the disaster in the opening, I expected similar tense situations to be a regular occurrence, similar to Moonlight Mile. A few episodes in, no such event has occurred. Alright, Planetes is a better Moonlight Mile, giving characters time to grow in between disasters rather than the end-to-end disasters of the latter. The characters still haven’t given me reason to care, but let’s give them a chance. So far, it’s mostly about putting up with living with each other, bickering, and corporate bureaucracy.

Several more episodes pass, and still no significant events wake me up from my stupor. They had time to give us an episode on space weeaboos – funny, but does nothing for the plot – though not a moment of tension. The downtime with character hasn’t developed them into anything interesting either.

It is at this point I realise Planetes isn’t good. It’s middle-of-the-road boring.

You have a mismatched crew trying to emulate Cowboy Bebop with none of the chemistry that made Bebop’s crew great. Tanabe using the clichéd anime introduction of yelling your profile put me off her right away. A story-lite series can’t sustain itself unless the characters are some of the best in the business. The episode about the girl born and living on the moon for research on the human body is interesting, though still not about the main story.

You have a romance between Tanabe and Hachimaki with as much electricity as a rubber gasket. He’s an ego-driven brute who constantly reproaches her and keeps flaking on the relationship, while she’s a woman of zero strength that rarely stands her ground against his selfishness. I despise female leads that never find strength.

Even so, I stuck with it for the sake of the review and to my surprise, the third act finally starts the story. Hurrah!

Humanity prepares to send a manned mission to Jupiter, calling on everyone in the world to apply. Hachimaki signs up in some desperate bid to do more with life. What follows is a series of trials to find the best candidates – Tanabe is a background character by now. Finally we have intense character-to-character conflict that isn’t the bickering of daily life. The theme of corporate morality also becomes a focal point, as only the rich will get richer when they colonise Jupiter, widening the wealth gap for the rest.

Planetes is quite preachy in its morals. It is many characters telling you how you should feel, rather than expressing their own opinions and leaving it to audience interpretation. Even though the story picks up in the third act, I don’t find myself much invested because the characters mean nothing to me. Those prior episodes didn’t use their time well.

Planetes and Moonlight Mile need to have a baby, combining the former’s ability to slow down with the latter’s penchant for disasters.

Clean character art and detailed enough environments are nice, but the tech detail is where it’s at.

Voice work could be better – why is there so much shouting? Tanabe’s girlfriends sound so annoying.

Planetes tells of the lives of a crew aboard a space station collecting space debris. With so many characters, few of which have much to say, a flaccid romance, and conflict that doesn’t start until the third act, this story is more slice of life than drama.

Recommendation: Try it. You may find Planetes more interesting than I did. Outside the third act, it has no pulse.