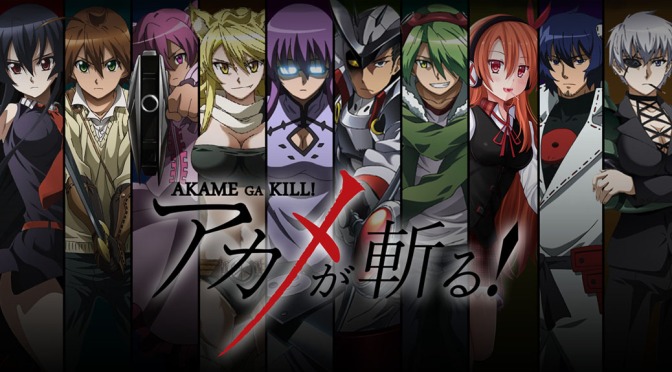 From the first scene, Akame ga Kill is an obnoxious anime. I fail to recall a time I hated a protagonist quicker than here. A cocky hero with forced-cool dialogue? Yeah, I hope he dies. He’s so stupid that a large-breasted girl cons him for all him money on his first day in the capitol. She just about asks for it and he hands it over. He’s that stupid. Then a noble girl happens to be passing in the next scene to take him to her estate. Why make him lose all his money if it amounts to nothing? The purpose is to acquaint him with the nobles, but it’s so clumsy that they may as well have typed the script directions on screen.

We then meet the main plot. A group of assassins called Night Raid aim to kill the sinful elite of the kingdom, chief of which is the emperor and his minister for oppressing the populace. Busty Girl is a member of Night Raid, as it happens. So that’s why she was in the useless scene earlier.

Night Raid’s signature – and by extension, Akame ga Kill’s – is gratuitous violence. It’s so meaningless, so overwrought and in a story littered with unfunny humour of poor timing that it didn’t faze me in the slightest to see a noblewoman sliced in two at the waist, her hands spiralling away from her body. Akame ga Kill has so much edge that Gillette has its engineers working around the clock to unlock its secrets. I mean, each episode is titled ‘Kill something’ – ‘Kill the Darkness,’ ‘Kill the Grudge,’ ‘Kill the Audience’s Sanity and Tolerance to Atrocious Writing.’

Episode one’s key action scene has Busty Girl comment how Hero Guy is good because he’s lasted longer than usual against Emo Girl. In reality, Emo Girl mostly stood around and when she does attack, he survives through luck. Her sword that bifurcates people like butter can’t pierce a wooden statuette in his shirt pocket when convenient. Wow, so impressive, Hero Guy. They’ll fall in love over nothing, of course.

Night Raid reveals to Hero Guy that the noble girl and her family torture commoners for amusement, including his friends whose names I can’t remember. Much like the violence, there is no build up to this revelation so it leaves no impact. It does foreshadow how shallow the villains will be, however. “Are you shocked? Are you shocked yet?” The show keeps asking. Yes, I am shocked at how someone can write a story and characters this bad. I can’t believe this is making Aldnoah.Zero look like quality.

By the way, I wrote this review after watching a single episode, and with the final episode complete, I have nothing to change except to say it only becomes worse. Here are a few highlights to come:

While some of the backgrounds look decent, nothing can make up for poor animation, bad choreography, generic style, and dissonant character designs. The character design is so lazy that half of them dress in everyday modern clothes in a fantasy world. The creator couldn’t be bothered to design clothes.

Every character sounds like the typecast of their archetype in an atrocious script. The music is as forgettable and generic as the art.

A group of assassins kill the corrupt elite of the kingdom one villain at a time. With some of anime’s worst characters, shoddy action, expository dialogue, and cringe-to-the-edge, Akame ga Kill will kill your brain before the end.

Recommendation: Avoid it. Akame ga Kill has likely made it into the ten worst anime I have seen, and I go out of my way to watch some bad anime for the ‘so bad it’s good’ joy. Akame ga Kill cannot even boast that quality.