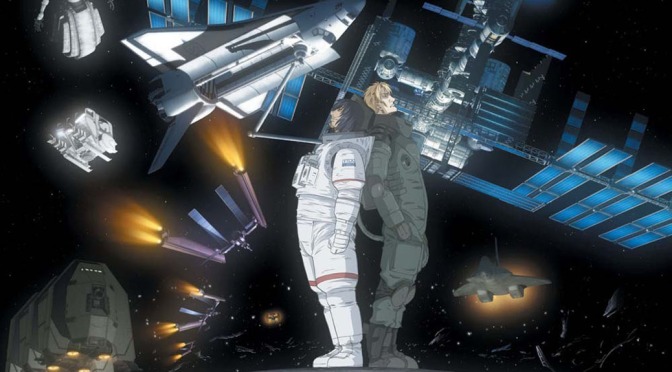 What made me curious to watch this anime? Was it a) space, b) the engineering, c) premise, or d) sex? The answer is a), of course – I love space! Alright, I admit, it was the sex, okay. Happy? But no, in all seriousness, when I was at the Kyoto International Manga Museum, they had an exhibition spotlighting civil engineering in manga – infrastructure, architecture, development, etc. – as the Japanese take great pride in their civil engineers (when you watch them build a house in a day, you can see why [turn on captions for subtitles]). I picked up Moonlight Mile because it had an astronaut on the cover (I am serious about the loving space part), but was struck by how sexually graphic the opening scene was. If I hadn’t seen the cover first, I would have assumed this belonged in the section you wouldn’t mention to your parents. This scene is so graphic that I was curious if they got away with it in the anime adaptation. Spoiler: they don’t.

But first, the story. Two climbing buddies, Gorou from Japan and Jack “Lostman” Woodbridge from the US, make a pact atop Mount Everest to see each other in space as they look to the sky above. They soon part and set about achieving this goal in their own manner. Gorou takes the path of an engineer, while Lostman goes the air force route (two-thirds of US astronauts come from the military). Becoming an astronaut is no easy journey and each will face trials and setbacks, even more so than real astronauts, for Moonlight Mile loves to throw one disaster after another at the protagonists.

Now, you know me, I love conflict – it’s the engine of fiction – but there comes a point where you need to allow characters to grow. In fiction, scenes follow the rough pattern of action and reaction. Something happens in a scene (action) and the characters react/reflect on this action in the next scene (reaction). Moonlight Mile rarely stops for the reaction. All space movies have those disasters – oxygen leak, broken thruster, power failure, etc. – for the astronauts to solve. These moments are exciting edge-of-your-seat tense, yet if you have nothing but this, as Moonlight Mile does, the tension wanes. The characters, while decent, feel like mere nuts and bolts to this story, rather than driving agents.

The first episode is nothing but a disastrous climb up Everest to establish the characters. This should have taken a few minutes. Well, there is Gorou’s butt as well.

As for my initial curiosity, while most episodes have a sex scene, it isn’t graphic. Still certainly not for kids, though is a far cry from the manga. It also doesn’t add to character, for Gorou falls in love with a new girl faster than a shooting star. This wouldn’t be an issue if he grew from each relationship. Alas, a new girl means a clean slate of development, so what’s the point?

In regards to the engineering, Moonlight Mile succeeds in taking care to do the math and science in a disaster. I’m not a rocket scientist, so someone more qualified may find great flaws here, but Moonlight Mile doesn’t try to convince us that training oil drillers to become astronauts is easier than training astronauts to operate a drill.

The 2D animation is junk, whereas the 3D sees overuse for vehicles and sweeping shots. Even the ground is CG in these scenes – so distracting.

The Japanese script is a bit dry, so go with the English, which added more banter and a natural flow to the dialogue.

Two friends and rivals vow to meet each other as astronauts in space. This is their journeys to meet that goal. Moonlight Mile suffocates its characters in disaster after disaster for them to resolve, giving little room to develop. At least the disasters are tense.

Recommendation: For space fans. Did you like Armageddon? If yes, then Moonlight Mile is the anime version. If you thought that movie needed better science, Moonlight Mile will also satisfy in that regard.